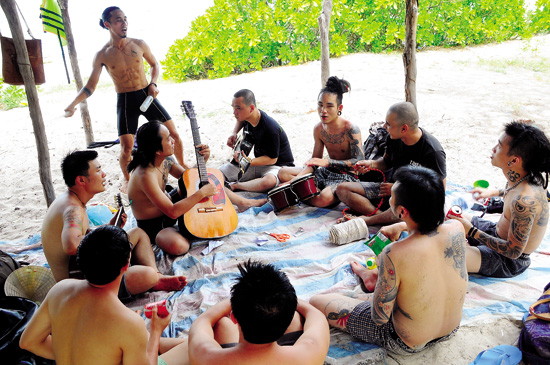 Vietnam Heritage, September-October 2011 — One weekend, singer Pham Anh Khoa invited his friends to go to BÃ£i HÃµm, Ba Ngoi, Cam Ranh City, Khanh Hoa Province, in southern central Vietnam. BÃ£i HÃµm is a five-hectare valley between two rocky hills 50 to 100 metres high, overlooking the sea. There was no road to the valley, so we had to take a boat for 20 minutes.
When we arrived, we put the tent, a canvas, pots and pans and food and drinks in a spot by the sea and set up camp. While some were getting up the tent and hammocks up, others were looking for dry sticks to use as firewood and fishing for squids or diving in the sea for fish.
A local man called Bay caught a batoid fish of about five kilograms, a mangrove red snapper, a leatherjacket and an eel. Anh Khoaâ€™s friends caught some squid, sea urchins and some areola babylon snails.
That was enough food for the evening, so everyone went swimming in the sea or played football on the fine, white sand, in what is considered the islandâ€™s most beautiful place. The waves were not big, because of Binh Ba Island in front of the valley; and the water was clear enough for us to see the fish in the water.
Singers Thuy Trang and Thanh Thao left their kids in the care of somebody else, put on goggles and dived in an area of about two metresâ€™ depth, just to see colourful marine creatures, like sea anemones, corals, sea cucumbers and starfish. After that, the group got on a boat to explore a coral reef at BÃ£i Ráº¡ng nearby.