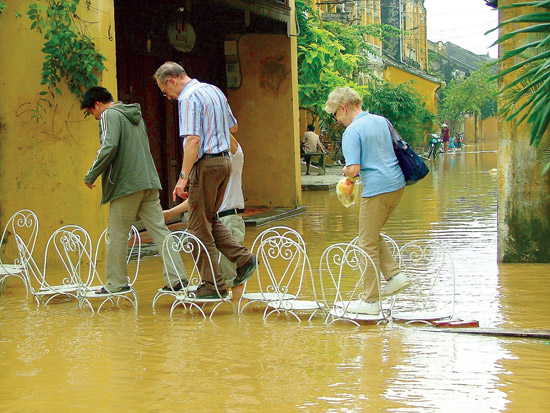 Hoi An during a flood in 2007.
Photo: Truong Dien Thang

In 1994, an Englishwoman, Maria Coffey, and her husband travelled Vietnam by boat and bicycle, prompted by the nostalgia of a Vietnamese friend. In a book called Three Moons in Vietnam, published in 1996, Coffey wrote, â€˜Hoi An looks like a sleepy suburb with historic houses full of mulberries in dense foliage.â€™ Despite big changes in much of Vietnam, Hoi An retains today much of the quiet and meditative feel Coffey found.
In the old quarter, houses face the street and its fish-skeleton alleys head toward the quietly flowing Hoai River*. The old houses were built mostly by the Chinese and Japanese. They are wooden, with roofs covered with â€˜maleâ€™ and â€˜femaleâ€™ tiles and cemented with mortar and molasses. Thanks to the organic component, grasses and mosses flourish on the roofs.
The â€˜eyeâ€™ above the door in front of each house, imposing as a protecting god, is there to prevent the house-owner from disasters [these eyes have not stopped the old quarter being flooded badly in recent years, perhaps because of deforestation upstream â€“ Ed.] and misfortunes. The eyes are square, circular, octagonal or a bat (in Vietnamese, â€˜batâ€™, dÆ¡i, the animal, also means â€˜fortuneâ€™). They are all cleaned for the lunar new year, when the residents drape them in a red cloth.
The World Heritage historic houses usually have two storeys, three sections, a narrow hall running sometimes from one street to another and an inner court with a light well in the middle section that is not roofed. The house usually shares a side wall or both with next door.
In the central well is a somewhat miniaturised garden, a tree with foliage for shade, a walking path and furniture that expresses serenity. It is starkly different from the busy, noisy, business front of the house. The owner also has a room next to the central well and an altar and meeting space.
The main streets of the old town, such as Nguyen Thai Hoc, Tran Phu, Bach Dang and Le Loi are, have houses on average 150 years old. Floods of tourists are a blemish on the original charm of the Hoi An old quarter, but, until recently at least, have not effaced it.
I have heard it said that the main streets are reserved for families of rich merchants who are descendants of the Chinese and Japanese businesspeople of old times and only the alleys belong to the native people of recent generations.
The indentations in the lines of buildings at the street are to help winds wander in the alley and mingle with water vapour from a dozen old water wells near the road, to give natural fresh air to every home.
The water wells have various forms, primarily square or circular, or are square and circle combined. This multiplicity is a result of the interplay of several cultures: the square well comes from Champa, the circular from China and Vietnam. One well is built with bricks and another with stones, but none uses mortar. A frame of ironwood is placed base to keep the well stable.
All the ancient wells here have altars to their goddesses, under whose protection, after hundreds of years, the water remains particularly sweet and unspoiled. Its quality appears in Hoi An cuisine.
Dishes offered in renowned restaurants include cao láº§u (Japanese-style dry noodle soup) and fragrant mÃ¬ Quáº£ng (Quáº£ng Nam-style noodle soup with rice cake). Other items such as bÃ¡nh bÃ¨o (steamed round or flat rice cakes) and bÃ¡nh váº¡c (fried patties) with fried scallions and oily flour can often be seen on the bamboo poles of women peddlers.
Visitors note greetings of â€˜helloâ€™ or words of welcome from the water-sellers at the wells or the clicking of the bamboo sticks of noodle peddlers at night, though they are rarer these days.
The alleys that lead to the Hoai River, where there is fresh air and where they dispose of rain and used water, stand, in spite of the ravages of seasonal floods caused by monsoons. [From this it would appear that the alleys were built down to the river in full knowledge that they would be ravaged. â€“ Ed.]
There is a saying in the old quarter that:
â€˜Forgiven by the male river god but not by the goddess/ Another flood on the 23rd of the 10th month comesâ€™ (Ã”ng tha mÃ  bÃ  cháº³ng tha/ Láº¡i thÃªm cÃ¡i lá»¥t hÄƒm ba thÃ¡ng 10).
Water rushes through the streets and into the houses, penetrating imposing old buildings. The people are surprised not by the floods but by the high levels of the water reaches.
The flood of 1946, with a high mark of 2.5 metres and numerous devastations and disasters, returned in 1999. The commonly-thought cycle of 40 years for great floods is no longer true. In 2007 the flood surpassed records and submerged the lowlands of the entire province, Quáº£ng Nam.
Tourists come from all directions to observe the Hoi An floods. One of their pastimes has been to sit in small boats, floating along the streets, revelling in the calmness of the residents.
Originating in the Sa Huá»³nh culture 2,000 years ago, prospering as the old Linyi Town of the Cham people and seaport of Hoi An affluent during the time of the Nguyen overlords four centuries ago, the old quarter of Hoi An today contains not only relics and marks of its history but a sense of flexing and accommodating continuation.
If the Thu Bon River had not changed its course, we might have expected today a Hoi An noisy and dirty, a city with skyscrapers and an ambitious, nervous population. This is not Hoi Anâ€™s long-acquired character.n
* The Hoai is a part of Thu Bon River