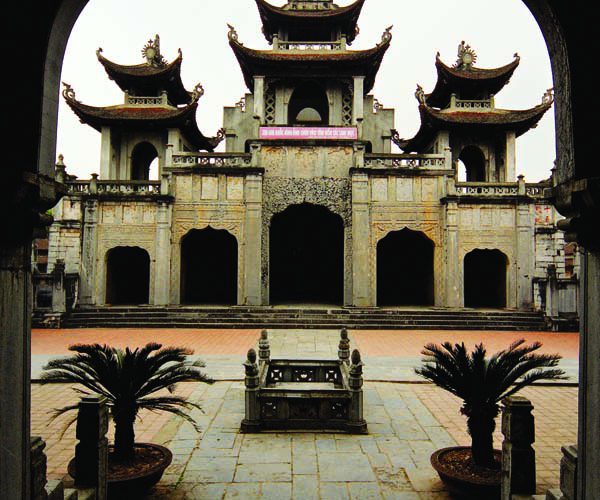 A ‘Catholic Capital’ in a bog


Rock buildings on soft mud
‘In 1865, Father Peter Tran Luc, an extraordinarily erudite scholar who was versed in both Chinese and Latin, was appointed the bishop of Phat Diem. Being called also the ‘Sixth Ender’ for his visionary wisdom, father Tran Luc decided to build the Phat Diem Church complex,’ the website reads.
‘To see the scale of the Sixth Elder’s vision, please be reminded that the area where the Church was built was just a marshland full of reeds at the time,’ Father Paul Bui Chu Tao preached in a Mass.
To build a huge complex of massive stone buildings with enormous wood logs on a muddy marshland, father Tran Luc and his parishioners had to spend a decade to prepare the materials.
According to the website the up-to-20 ton stones were taken from quarries 30-60 km away. Wood logs, some up to seven tons in weight, were brought from Nghe An, about 200 km away. The materials ready, the Sixth Elder began calculating and testing the sink ratio of the soil.
‘They dug wide ditches and drove millions of bamboo poles 20m, 30m into the ground, one on top of another, until it could go no deeper. Then they dumped crushed rocks on the ground and rammed them down with human or buffalo labor, layer after layer,’ father Bui Chu Tao described.
All the walls of the complex were built with big rocks. As the construction proceeded, the Sixth Elder had slopes built along the walls to transport the rocks up to the height.
The walls completed, they proceeded with the most difficult part of the work: the sophisticated and heavy roofs which consisted of large and heavy girders, beams and purlins. The hardship of the construction continued for 34 years and only stopped for a while on July 6, 1899 when the Sixth Elder died. The Church was at that time already almost completed.
This architectural complex, one of the most grandiose in Vietnam at the time, after being completed was named the Church of Phat Diem – the birth place of beauty. Built in such a robust way, the Church of Phat Diem has survived over a century of brutal weathers and wars, shellings and bombardments, and remains almost intact.

Church and Pagoda in harmony
Coming into the church complex, the visitors’ first impression is perhaps about the fact that all the buildings look like western church structures, but the roofs are curved upward like those of Vietnamese Pagodas.
Between the chapels, Bishop’s edifice, theater and stone caves are walking paths paved with natural stones, a courtyard under age-old trees, and an almost 4 ha lake near the main gates with a little isle that serves as a pedestal on which stands Jesus Christ spreading his arms. To most people, these elements make the church look so much more intimate to the minds that were more accustomed to the air of Vietnamese pagodas.
‘Many say that these structures look similar to the pagodas or temples. Well, that is part of the purpose, because through these buildings, Father Tran Luc wanted to show the harmony of Catholicism in relation to other religions in Vietnam,’ a priest of Phat Diem said in a press release.
All the buildings in the Church complex of Phat Diem, beautifully designed, stand in perfect harmony with their surroundings, being adorned with a lot of ornamental elements. The most admirable among them is perhaps the Big Church.
There is a decades-old analogy comparing the Big Church to a Goddess of Beauty surrounded by Her Maidens. It originated from the fact that the majestic, splendid Big Church stands in between four chapels, smaller but no less magnificent.
Like many pagodas in Vietnam, the Big Church has double level roofs. There is a row of windows between the upper and the lower levels of roofs to let in air and light.
Along the 74m long sides of the Big Church are 28 doors; each thoroughly processed and meticulously carved. Under three square towers, the facade is 24m wide. There are five entrance paths beneath the towers, all built with stones and look like 9m long tunnels. Each tunnel is decorated with three intricately carved reliefs. The big relief on the wall of the main ‘tunnel’ depicts 17 angels on a bush of Rosarium.
According to the website of the Church of Phat Diem, ‘entering the Big Church one feels an air of meditative solemnity typical of Vietnamese pagodas.’
Most remarkable in the Big Church are the 52 pillars supporting the roofs, among which the tallest and biggest are the 16 central ones. According to the website of the church each of these pillars is 2.6m in perimeter, and 11m tall, weighing seven tons.
On top of each row of pillars is a large beam strong enough to hold the weight of the tiled roof above it. All the girders, beams and purlins are sophisticatedly carved with folklore themes. The innermost part of the Church is the Sanctuary. In the Sanctuary there are four stone altars adorned with sophisticated carvings. Most notable is the main altar, which is a 3m long, 0.9m wide and 0.2m thick slab supported by bamboo-shaped carved stone poles.
Behind the altar is a red-lacquered and gilded wood and glass wattle, richly decorated with paintings and carvings. This grand composition has many admirable scenes such as: Holy Mother holding Infant Jesus; The Six Martyrs; Holy Mother giving the Rosariums to Saint Dominic, with 12 angels surrounding them. Contemplating this great composition, visitors marvel at the talent and skills of the ancient artisans, and at the durability of the red lacquer and gild that remain bright and intact after more than a century.