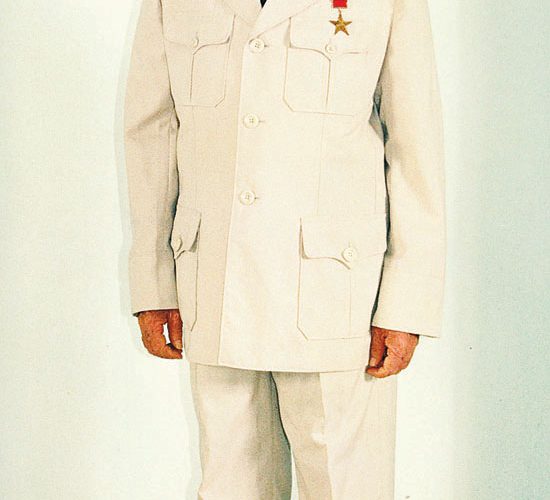 For many of us, the recent passing of scholar, teacher, journalist, statesman, author and above all military strategist General Vo Nguyen Giap will be seen as a defining moment. General Giap died on 4 October. He was 103.

Probably the second most famous Vietnamese ever, General Giap enjoyed a reverence and renown that knew no bounds. When working in Afghanistan in 2004, I was surprised to have an Afghan colleague whose first name was Giap. It must a coincidence, I thought. Giap must have a meaning in the local language, which was Dari. But he told me this was not the case and that his father greatly admired General Giap and named his son after him. When the Taliban were in power, he also said he had been requested to change his name to an Islamic one. He did not comply, but was not punished. The Taliban, too, perhaps had a regard for Giap and probably if they had a commander with even half the gifts of Giap, they would be faring better.

I myself have very tenuous links with the General, having worked for three years in his home province of Quang Binh. I have been to his village area of Le Thuy many times. My wife’s family is originally from there and she tells me her mother knew the family as well-educated and cultured folk. Giap came from a family of rice farmers. He studied law at a university in Hanoi.

Tributes have been flooding in, which has given me a chance to deepen my knowledge of and appreciation of the life of General Giap Please allow me to pass on to you a roundup of some of what has been written about him in the English-speaking press:

‘The BBC’ heads its article ‘Top Class’, and hints Giap’s prowess may have been linguistically determined, as his family name Vo means ‘martial art’ and Giap itself means ‘strong armour’. We are reminded that the General, without the benefit of formal military training, was ‘victorious against enemies far better technically equipped.’ Giving further insight, the article informs that a student recalls that Giap – his history teacher – could draw Napoleon’s battle plans from memory. The BBC also quotes a tweet from Senator John McCain who spent years as a prisoner of war in Hanoi. ‘General Vo Nguyen Giap has passed away-brilliant military strategist who once said to me, you are an honourable enemy.’

‘The New York Times’ has his character as ‘relentless and charismatic’. It says he took ‘A small ragtag group of insurgents and transformed it into a highly disciplined force that ended an empire and united a country.’ They rate his generalship as top notch – ‘his achievements put him in the company of Mac Arthur and Rommel and other great military commanders of the twentieth century.’ They quote a comment from an interview with a young French colonel who surrendered at Dien Bien Phu in Peter G Mac Donald’s biography of the General – ‘He learned from his mistakes and did not repeat them.’ Finally, the NYT is complimentary about his writings – ‘he was an erudite military historian.’

The online journal ‘The Huffington Post’ recalls a nickname given to him which, given his love of history, would have please him – the ‘Red Napoleon’. They quote the man himself responding to a question on how he learned his skills – ‘I attended the “Military Academy of the bush”.’ A succinct summary of just how victory to ensure the ousting of the French was achieved at Dien Bien Phu in 1954 is given – ‘An army of guerrillas who wore sandals made of car tires and dragged their artillery over mountains to encircle and crush the French army (in the valley below).’ This type of tactic is carefully studied today by budding soldiers all over the world.

Britain’s ‘The Telegraph’ gives the best summary of that other great attack of 1968 with planning from Giap, which became known as the Tet Offensive. A general attack was launched on a host of targets across the south … it forced a fundamental change its attitudes to the Vietnam War in America, where commitment to the conflict began to crack.

Moving to the left of the British press, ‘The Guardian’ plays down Giap’s military brilliance, preferring to praise his diplomatic skills and gainful use of psychology. They quote from Giap’s writings – ‘People should not be overawed by the power of modern weapons. It is the value of human beings that will decide victory.’ The Guardian also is at pains to point out the General was always his own man. He always liked to be smartly turned out. We have a picture of him in our living room looking dapper, dressed in his white uniform – no Mao suit for him! Furthermore, noting that he was driven in a curtained Russian limousine and housed in a French villa in Hanoi, The Guardian writes ‘he did not even pretend to follow the puritanism that the leadership affected.’

General Giap, of course, lived an extraordinary long life, staying alive and active until the American War had passed into history and living to see a relatively prosperous Vietnam. I wish we knew as much about his secrets for longevity as do his military tactics. He served as Minister of National Defence from 1946 until 1979 and Deputy Prime Minister from 1955 till 1986. He even lived to meet his great nemesis General Robert Mac Namara in 1995 and swap notes.

Finally, an anecdote that illustrates just how deep Giap goes into the Vietnamese psyche. My wife at breakfast this morning told me she had a dream last night. She told she had met her deceased mother walking along a road. ‘Where are you going Mum’, she asked her. ‘I’m off to Le Thuy to meet Giap’, she replied. It has been true honour to write this. When I am gone, I would like to meet Giap in another world and have another honour, namely that of a game of chess with Giap. He would beat me hollow, I am sure.

I was driving when the call came from my daughter in Australia. ‘Mom, have you heard the news? Mr Giap has passed away. It’s all over BBC.’

I had to pull over. I had always known that the time would come when that man would shrug away the dust of this world, leaving behind family and friends, the perpetual gnawing worry for his country and people, and the ungrateful injustice of the world that did not know or care that he laboured for them.

Memories from a decade ago came back to me, as vivid as autumn leaves, as if things had happened just yesterday. The first time I met him, I was only a girl, freshly graduated from Russia and totally immature. He asked me, ‘You study acting? Why have you drifted to HCM City, being a girl from Hanoi? A documentary film director at Ho Chi Minh City Television is a very hard job for a Hanoian girl, you know.’ He attentively poured tea for me, asked me questions, encouraged and counselled me about every minor thing, as if he was my own grandpa.

He received me three times, each time from morning till dusk. He shared stories of war, happy and sad memories, contemporary issues, family matters, and even very personal matters. There always seemed to be a miraculous glow around him. He exuded calmness and made me feel inexplicably relaxed. I felt as if he was a kind deity. The feeling left me only after I exited the gate of his house in Hoang Dieu Street, Hanoi. Now I have vaguely understood why some people can mobilize millions by words alone – it’s the power and gravity of a genius!

I remember once he burst into tears, like a little child. He choked and cried bitterly for quite a while, because of a thing which I am not permitted to say. Luckily I have managed to record those very real, very down-to-earth images, the secrets that only I know, and nobody knows when I will be able to publish them. After that unforgettable footage was taken, the guards called me. A heroic general that the whole world respects, who won great battles, cried like a little child. My heart tightens and I cannot write anymore. Oh Mr Giap!