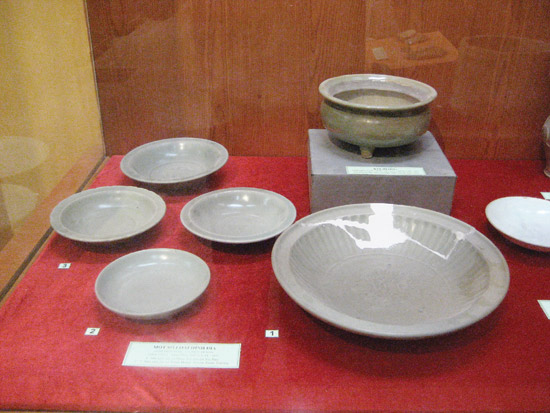 A history of Vietnamese celadons

Vietnam Heritage has been publishing a series based on ‘2,000 Years of Vietnamese Ceramics’ by Nguyen Dinh Chien and Pham Quoc Quan, published by Vietnam National Museum of History, Hanoi, 2005.
This month the topic is monochrome celadon ceramics.
Vietnamese celadon ceramics are developed not in the same direction of their Chinese counterparts; rather, but after the standards of Long Quan wares. This is natural because all nom-Long Quan celadons in China, although in similar forms, also have different body materials and glaze colours.
Vietnamese celadons have a wide range of colours ranging from yellowish to grayish to glassy light green. This results mainly from different compositions of clays and glazes, and also from non-standard firing temperatures. It is also due to different production times and kiln centres as well.

In my opinion, Vietnamese celadons were produced as early as the fifth/ sixth century at the Dai Lai and Gia Luong kilns (presently in Bac Ninh Province, near Hanoi) with a thin and light green glaze which easily eroded. Toward the seventh to eleventh century, this kind of glaze was still used, as the specimens from Duong Xa (Hanoi) and Dau Keo (Bac Ninh) exhibit. These pieces resemble those from Dai Lai while they have some similar forms, but with different production techniques and quality as compared with their imported Chinese equivalents discovered at the ancient sea ports of Dien Chau (Nghe An Province) and Nong Cong (Thanh Hoa Province).
It is possible that these green ceramics are the initial products of Vietnamese celadons, or rather, the Vietnamese pre-celadons.
Toward the early Ly dynasty (1009-1127), it seems that celadons were replaced by white ceramics inlaid with monochrome-brown. This type was not reproduced until the late Ly and early Tran. The most typical examples are deep bowls with small foot rings, chrysanthemum relief on the exterior and straw-yellow/ glassy light green glazes. Apparently, those are the copies of Southern Sung celadons.
Up to now, no kilns of the Ly period have been found. However, the finds discovered in Thanh Hoa and Nam Dinh Province suggest the future excavations of kilns in these areas.
By the Tran period, celadons were produced with similar glazes, varying from yellowish green to glassy light green to apple-green to olive. However, the shapes were more diversified. One can find ewers in the form of a melon, ewers with covers in lotus leaf shapes, ewers with dish-mouth and curved handles, ewers with garuda spouts, and small vases with a deep well and a large and flat base.
Examples uncovered in quantity from tomb sites suggest various celadon production centres during Tran. The piece inscribed with Han characters for ‘Made in Thien Truong District capital’ indicates that Thien Truong in the vicinity of present-day Nam Dinh City was once a celadon production centre. The excavations made jointly by the Vietnam National Museum of History, the Vietnam Archaeology Institute and the Hanoi Office for Culture and Information have confirmed that during the Tran-Le transition period, celadons were produced in present Hai Duong Province and also at Ngoc Ha, Hanoi.
The thirteenth and fourteenth centuries saw the mid-phase of the evolution of Vietnamese celadons, which were produced with mire, in varied types and in large numbers. However, examples found at Thien Truong and Ngoc Ha do not exhibit homogenous glaze colours, probably due to the lack of standards in glazed recipes and firing techniques for different production centres and different kilns.

Nonetheless, the collection of fifteenth century celadons found from Hung Thang
(Hai Duong) shows a relatively uniform dark green glaze. Though their jade-like quality is not so high, they still reflect a high time in the development of Vietnamese celadons. A representative example is a bowl with the exterior glazed in celadon and the interior pained in under-glazed blue, now in the Vietnam National Museum of History. It has glazing similar to the examples found at Hung Thang, showing a certain uniform for Vietnamese celadons at the time.
Regrettably, during the Restored Le and Nguyen dynasties, celadons, as a type of ceramics, no longer existed.