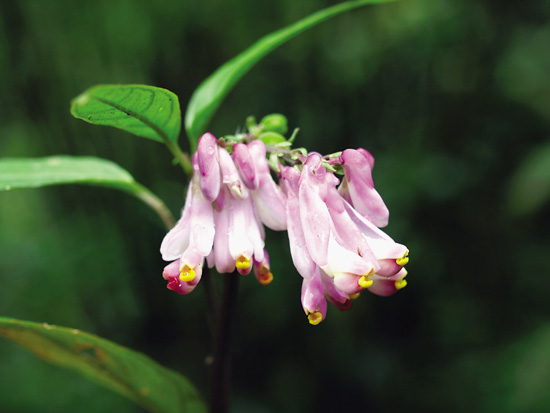 A naturalist on Mt Fansipan

Vietnam Heritage, March 2011 — â€˜I almost cried from happiness when I saw a couple of mountain toads mating and giving eggs. This species was thought to be new one. I really did not want to interrupt their fun but I had to take them as specimens for research purposesâ€™

Clockwise from top left: Polygala tricornis, growing on a slope of Mt Fansipan; Vietnam Red Book-listed black bamboo (Phyllostachys nigra) growing beside a path; Rhododendron klossi; the rare barberry plant, or Berberis wallichian, which can be used for medicinal purposes; Rhododendron tanastylum; a species of azaleas that couldnâ€™t be properly identified, but was dubbed pink Rhododendron sp.

April is in the rainy season on Mt Fansipan, the highest mountain in Indochina, the time for amphibians to wake up after a long hibernation and search for food, copulate and reproduce, and the most suitable time for researchers like me to study the wildlife, collect specimens and perhaps discover new species. Among the things I came across on a trip in April, 2009, are the following:
On a slope, a flower of the milkwort family (Polygalaceae), Polygala tricornis, was blooming pink bells that quivered in a breeze.
Black bamboo, Phyllostachys nigra, a plant listed in the Vietnam Red Book, grew along paths.
At an altitude of 1,900 m, I found a couple of small streams and some rather wild forests. The main wood trees belonged to the beech family, Fagaceae, and magnolia family, Magnoliaceae. Nearly 100 species of heather, Ericaceae, were to be found on the mountain.
In forest shade plenty of cardamoms, Amomum aromaticum, a valuable plant in medicine and for its aroma, were blooming, which signaled a good crop for the native people.
High above, many species of orchids were showing their flowers. Coelogyne fuscescens wore its bright orange flowers and Dendobium sp. its white ones with a distinctive black dot in the middle of the labellum.
Azalea bushes also displayed their beauties, in the pink of Rhododendron klossii, red of Rhododendron tanastylum and pure white of the fragile petals of Rhododendron sp.

Bombina maxima, a small toad listed in Vietnamâ€™s Red Book, on a stump at 2,400 m on Mt Fansipan

At an altitude of 2,400 m, a small toad, Bombina maxima, listed in Vietnamâ€™s Red Book, appeared on a stump. This species lives between 2,000 m and 2,600 m. Though I had photographed hundreds of amphibians and reptiles in Vietnam, this was the first time I had seen this rare toad in nature.
At 2,500 m, there was serious deforestation of the primitive forests, perhaps due to ethnic-minority use of the land for cultivation. Many trees were burned, black chunks and dwarf bamboo Bambusa sp. grew on most of the forest areas.
In a damp cave were primulas, Primula chapaensis, which grew only in the area of Sapa and was listed in Vietnamâ€™s Red Book.
Deep in another cave, the bright pink of Cymbidium lancifolium and purple of Pleione grandiflora blended with each other.
On a mossy mountainside were two strange species of azaleas I could not identify by scientific names. For the moment I will call one a small-leaf, dwarf rhododendron, Rhododendron sp., and the other a pink rhododendron, Rhododendron chunii.
I was surprised to see a barberry plant, Berberis wallichian, a very rare and valuable medicinal plant that is listed in the Vietnam Red Book. This was the first time in my ten years of research I had been able to photograph this species and update my taxonomy web page (www.vncreatures.net) with it.
Above 2,600 m, the trail was narrow, between two nearly vertical drops. The sunset had an incredible beauty. A few minutes later, clouds covered the sky. Darkness came with howling, cold wind and my group shook with cold. We had to open our mouths to get a deep breath, due to the thin atmosphere at this altitude.

From left: Pleione grandiflora, found deep in a cave; another species of azaleas temporarily called pink rhododendron, Rhododen; Rhododendron with pure white in its petals

We reached 2,800 m at 8 p.m., almost exhausted after a whole day of climbing that involved legs, arms, buttocks and even back pushing against the mountain. Dinner was delicious noodles, rice, eggs, beef and chicken. Water boiled below 100 degrees C, at this altitude, so our food was not well done, at least not in the same space of time.
Our group, eleven, huddled in at least four layers of shirts and a raincoat. [The accommodation was a tin hut.]
When I woke up in the morning it was still raining. The wind shrieked through the bamboo bushes. The light was dim because of haze. At 7.10 a.m., everyone got up to have breakfast and prepare for the final journey, to the top, at 3,143 m.
This was the highest breakfast ever for many of us.
After more than two hours of heavy steps, at nearly 3,000 m, I heard the small call of an animal. Experience told me there couldnâ€™t be any amphibians at this altitude. But my heart told me something very strange.
I listened, looked carefully, dug and searched. I almost cried from happiness when I saw a couple of mountain toads mating and giving eggs. This species was thought to be new one. Research was being done on its classification. I really did not want to interrupt their fun but I had to take them as specimens for research purposes. I had ever seen amphibians living at a higher altitude.
We reached the top of Fansipan and screamed and yelled for having conquered ourselves, while it rained and the wind howled.

Text and photos by Phung My Trung