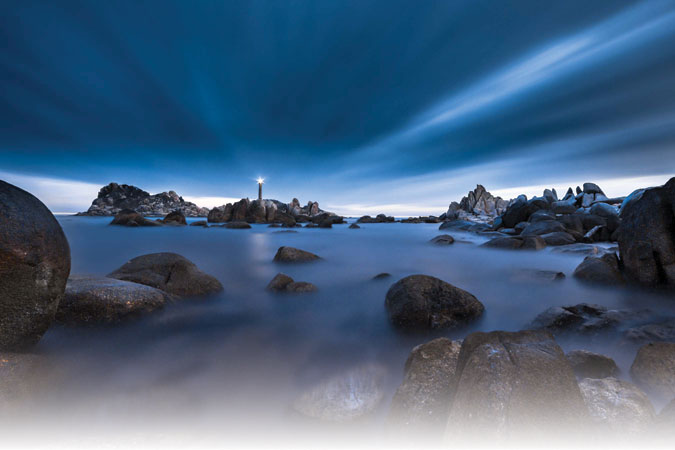 Two travellers conquer an old lighthouse on a desolate island

With an area of just 7 ha and only 500m from shore, Ke Ga, a beautiful rocky island in Thuan Qui Commune, Ham Thuan Nam District of Binh Thuan Province is quite famous because it has a lighthouse that many think is the tallest and oldest in South-East Asia.
Recently, many tourist companies came up with attractive ideas by combining the lighthouse tour with extreme games such as raft rowing, rope skidding, and asphalt-coated bamboo basket rowing from the shore out to the island.
From Ho Chi Minh City, I and a friend who didnâ€™t like taking tours decided to go to East bus terminal to take a bus to Phan Thiet. In this tourist town, we easily got a motorbike for VND150,000/day and hit the road to Ke Ga. Just 30km from Phan Thiet, we saw the lighthouse, which looked like Don Quixoteâ€™s lone proud pike.
On the shore opposite Ke Ga, in the shade of densely planted coconut trees, we saw a lot of restaurants and inns that offer boat transportation to the island. Seeing new strangers, a boat owner immediately offered, â€˜Please take my boat. Itâ€™s just VND50,000 for a round trip.â€™
About 10 minutes later, we were on Ke Ga Island. Itâ€™s made of rocks of different sizes and shapes. Thick flocks of swallows float in the sky like huge kites.
Today, the island today is barely covered by rare dry bushes, but historical records say that Ke Ga had a small creek running through a dense forest, rich with pheasants.
Two rows of age-old big rough-barked plumeria trees line the path to the lighthouse. â€˜Each row has 20 trees, planted by the French over 100 years ago. They blossom garishly from Jan to April, and that is a sight to seeâ€™, the lighthouse keeper told us. The tower base is an octagon; each side wall is 3m long and 1.6m thick, built with thousands of large granite rocks, laboriously cut. I felt like an ant standing next to an elephant.
According to the Southern Maritime Safety Company, which takes care of Ke Ga lighthouse, its height is 41m from the base.
Pointing to a little shrine blurred in incense smoke, the lighthouse keeper said, â€˜Itâ€™s for the 90 souls who died while building this lighthouse.â€™ He added, about 40 years after having colonized Vietnam, seeing that many ships and junks sank in the area around Ke Ga, the French decided to build this lighthouse. Designed by architect Chnavat, the lighthouse construction began in February 1897 and finished in late 1898.
Inside, 184 spiraling stairs, worn flat by human feet, lit by numerous windows on the side walls, led to the top of the tower. Just half way I sweated profusely, my heart pounding in my ears.
At the top, I was surprised to see for the first time a light bulb nearly 1m in diameter. It uses solar power, can turn 360 degrees and can be seen from 22 miles away.
Walking on the balcony around the light bulb, called the â€˜eye of the seaâ€™, I felt dizzy at the depths below, and the infinite blue misty mass of the sea and the sky. Beneath me, wave after wave lathered the rocks around the island. The houses of the fishing village Ke Ga gleamed behind the dock full of fishing boats and lush dragon fruit gardens.
As we returned to earth, we entered a two-storey house with almost meter-thick walls, built by the French for the lighthouse keepers, and listened as its current masters shared their stories about the happiness and sorrows of living on the island, protecting the â€˜eye of the sea.â€™