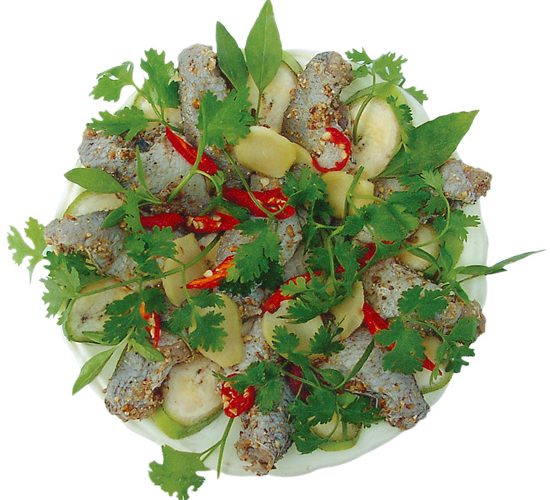 A season in an earthenware jar

Vietnam Heritage, June-July 2011 — One day, novelist Nguyen Quang Sang came to Bac Lieu Province in the Mekong Delta and invited me for a meal. I went to see him, taking with me a jar of fermented fish (m?m), made in Vinh Hung, as a rustic present for a guest from the big city.
But I was worried when the fermented fish was served. Sang was so famous for his literary gift, and I personally knew him as a connoisseur of dishes and wines. His companion that day was Hai, owner of a well-known restaurant in Saigon.
After taking a roll with boiled pork and vegetables dipped in the m?m and a sip of rice liquor, the novelist thought for a moment and nodded, ‘Wonderful!’ And Hai, a big eater, ate only the m?m, among many delicious dishes.
Fermented fish is exceptional because you never forget its taste and because on a table full of various dishes it always dominates.
Residents in the Mekong Delta have reason to be proud of this food.
Ways of making fermented fish differ from province to province. Production reached its peak about thirty years ago when fish were abundant and freezing techniques were not so widespread. Nowhere is the use of fermented fish more prevalent or the ways of making it more diverse than in provinces along the Mekong River.
The Khmer people make their own fermented fish, called ‘m?m bò hóc’, from freshwater fish. The Vietnamese produce salty or sour fermented fish or shrimp. Three peoples in the Mekong Delta, the Vietnamese, Khmer and Chinese, are connoisseurs and producers.
My elder and younger sisters clean fish and lay them them in the sun to dry then take them into the kitchen, where my mother spices them, usually with salt and roasted rice powder. The spiced fish are layered in big earthenware jars, covered with nipa palm leaves and clamped with thin bars of bamboo.
Only after helping my mother for years had my sisters learned how to produce fermented fish, because it is difficult. The fish may become black and smelly in some jars because of faulty technique. The art is handed down generation to generation.
In provinces along the Mekong River, every family knows how to make fermented fish, because they need to. The art makes the best use of small fish that otherwise could not be sold. It has served instead of fresh fish in the rainy season when fields flood and the latter are difficult to catch. In the past, there were no fish farms to ensure a reliable supply of fresh fish in the Mekong Delta year round. Images of big jars and the smell of fermented fish in kitchens of rural houses remain in the memories of those who migrate away.
A friend of mine who is from a rural town has achieved some fame in literary circles. He told me, ‘One day I was writing and my inspiration went high

and words poured from my pen when I smelled fermented fish from a vendor of  rice vermicelli in fermented-fish soup. My limbs went numb. I sat there and felt homesick, remembering the rainy season in my village and my poor mother who raised us with rice balls and fermented fish. I burst into tears.’
Fermented fish is also present in all towns and cities in the Mekong Delta, and Saigon and Phnom Penh as well.
Besides fermented fish produced for family use, there is an army of professional makers of fermented fish. After Tet Festival, they form groups of two or three, load their boats with jars and salt and row to Ca Mau at the southern tip of the Delta where they buy a section of ditch or a pond to catch fish or they go into mangrove forests to catch fish. They may stay there for months catching fish and fermenting them until all their jars are full.
In Bac Lieu Province in the past there was a gypsy way of producing fermented fish. In Bac Lieu then, there were waste and flood fields of hundreds of hectares where only some kinds of high, wild grass could exist. Rumour had it that snake-head mullet there could weigh five to seven kilos. In the dry season, fermented-fish-makers would transport jars and salt to these fields, put up tents and catch fish.
Fish takes from three to four months to ferment but the longer the better. Rural residents usually open their fermented-fish jars when the rainy season comes. At that time of the year, the land is green with various kinds of wild green vegetables and peasants start cutting grass and sowing rice. They usually prepare breakfast before dawn, and the smell of fermented fish springs from one kitchen after another.
Mothers steam a fermented snake-head mullet and pack some rice balls for their sons to take to the fields. Rice balls and fermented fish constitute daily meals for all ploughmen. When the sons come home from work at dusk they are served fermented fish and wild geen vegetables. When the son comes home early and the cooking pot is not ready, he may pick a red chilli, get a fermented snakeskin gourami [a common kind of fish] and eat them with cold rice.
When friends visit, they are served a dish of fermented shrimp along with sliced green ginger, stems of night-scented lily, winged bean and leaves of wild water mint, and they roast a walking catfish. At noon, when bored, boys and girls take some fermented fish on a small boat and have it with mangrove apples, to pass the time.
In Tan Duc and Tan Thuan Communes, Dam Doi District, a fish-rich hollow in Ca Mau Province, locals produce a specialty called m?m lòng (fermented fish-entrails). It is usually served with garlic, red chili, vinegar and coconut meat. The dish is so delicious that, as the saying goes, it is served to relatives on the father’s side only.
In Vinh Hung, Bac Lieu Province, a new kind of m?m has been produced and it can free you from worries about fish-bones. This famous fermented fish is what I offered to writer Nguyen Quang Sang.