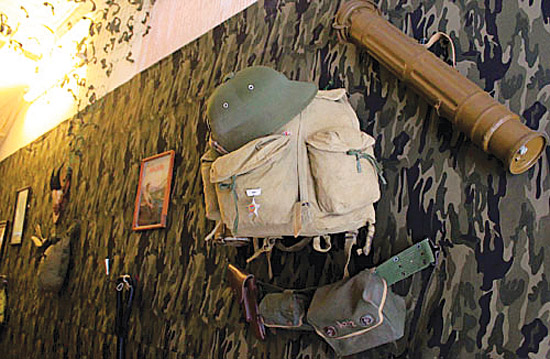 Items on display at the coffe shop

Le Tuan Nghia has never been a soldier, but he is interested in collecting military items. Nghia says his collecting began with his family members’ love of collecting audio items.
Nghia said, ‘I don’t know why I loved audio items popular from the Vietnam War when I was a child. Now I am an adult, and I am involved in event-organizing activities and travel around the country.’
‘Wherever I go, I try to look and see if anyone wants to sell the items I’m interested in. Gradually, I began to collect other items used in the military.’
Nghia collected most of those items in the central provinces where there were some of the most difficult experiences of the Vietnam War. According to Nghia, most of the items he has collected were used by US soldiers. That is why the people who sold the items to him rarely told him stories about those objects.
They are usually not expensive ‘old’ objects. However, just because they are personal items, the owner does not want to sell them, no matter how much the buyers want to offer.
Nghia said he once went to Danang on business and met a woman selling balut (fertilized duck embryo). She put the eggs in a container that US soldiers used as an ice container. She pulled the container along to sell the eggs.
Nghia said, ‘I asked to buy the container, but she said it was a souvenir and did not want to sell it. My business trip was about a month long and I met her every day and persuaded her to sell the container to me, without success.’

Items on display at the coffee shop

After collecting such items for a dozen years, he and his wife decided to open a coffee shop with a military-related name: ‘Café Lính (Soldier coffee shop)’ at 65 Hang Buom, Hanoi.
One of Nghia’s purposes for opening the coffee shop is to bring a place for memories to those who were soldiers and had a hard time during the war. He also wants to show young people the objects that bear part of the history of the country.
Nghia said the shop is new, but many veterans have become the shop’s customers. They come to re-live their memories of the war. Young customers show interest in military clothing or bullet casings and military equipment pieces. Some people put on military clothing and a backpack to take a photo as a souvenir.
Another special thing about the coffee shop is the owner’s old audio system. It is a reel-to-reel tape player, the kind which used to be popular in the past.
‘The sounds from the reel-to-reel tape player are analogue, which is of high fidelity. The songs recorded on reel tapes are not beautiful, nor do they have accompanying orchestra music like modern discs, so listeners may get bored at first. However, these tapes produce the sounds just exactly the same as the sounds from a singer, so the more you listen, the more you find it pleasant to the ears,’ the shop owner said.
Nghia expressed his idea of trying to find a more spacious locale for the coffee shop. He said, ‘I still have a dream that I would have a place to build a coffee shop with a basement and a large terrace so that I could display big objects.’
‘I’m very interested in the wrecks of helicopters. A lot of such things are still available for sale, but my place is still not big enough to make my dream come true. I think a coffee shop in a space like a museum will look interesting to customers.’

Text and photos by Hoang Phuong