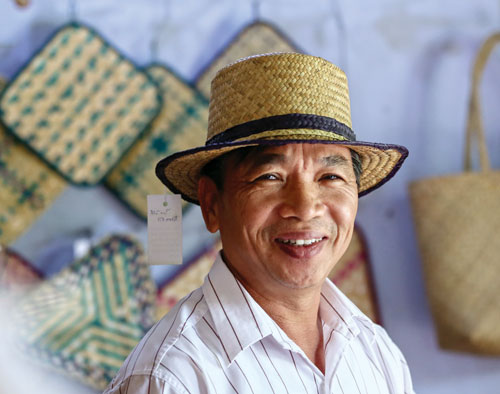 A star is born in mattress village

A village in Thua Thien in Hue Province gets its name from the craft product that the village has turned out for thousands of years. Today, its craft is experiencing a successful transformation into the market economy.

The mattress attachment
In the 16th century, people from Dang Ngoai (the northern region of old Vietnam) followed the Nguyen Lords (1558-1777) to conquer the southern land that later became Dang Trong (the southern part of old Vietnam). Many settled down in the basin of the O Lau River, which separates Thua Thien Hue and its neighbor Quang Tri. They formed several villages, including Pho Trach.
Like the nearby villages, they developed wet rice agriculture to feed the villagers until they found another plant to help distinguish the village. Near the village’s paddy fields, the villagers found small marsh ponds, a unique topographic feature. Inside the ponds, the only plant that could grow well naturally was the grey rush plant.
Generation by generation, the villagers figured out how to use the plant for daily needs until they consolidated their experiences to have the plant knitted to make mattresses. They invented a pedal-driven wooden hammer designated to flatten a bundle of the stems at the same time. Local farmers harvested the mature plants and flattened the stems with a hammer before drying them in the sun. Then they started knitting the dry stems to make mattresses and this became the village’s tradition.
They had several kinds of mattresses, including those made for beds, for floors to be used as carpets, and for baby cradles.
Thanks to the air that remained in the flattened stems, the mattresses were comfortably soft while laying or sitting on them. They also had amazing features – being cool during summer and warm during winter. The mattresses were also washable and each was durable for at least two years. The mattresses had another wonderful feature, which was the ability to absorb water–thus keeping babies dry during the time before industrial baby diapers.
For centuries, rush mattresses produced in the village were available in every home in central region of Vietnam, serving all ages. The village’s name became Pho Trach Dem, with the word dem going behind the village official name. Dem means ‘mattress’ in Vietnamese.
‘A long time ago, the name Pho Trach Dem replaced the village official name. No one knows Pho Trach, but everyone knows Pho Trach Dem,’ said Nguyen Thi The, an elderly person in the village.
In its heyday, the village had hundreds of skilled artisans working on the rush knitting craft and the village road was always busy with traders who came for the mattresses, according to elderly The.
Another elderly man said he found the mattresses comprised the main income for locals in generations and every child grew up with the desire to become a skillful mattress-making artisan. The heyday, however, did not last. Modern consumers prefer industrial mattresses rather than the rush ones that have a rustic, laidback look. Only Hue residents prefer rush mattresses for babies now. Sales of other products have declined, resulting in lowered income for locals and many in younger generations have quit the craft for another means of living.
An elderly artisan said that only nostalgic rural customers continue to consume the village’s mattresses produced in the village. The village’s half millennia-old craft faces its extinction.

Star of the village
Last April, the former imperial capital city of Hue introduced new items that have never seen at previous versions of the biennial event called Hue Craft Village Festival.
Audiences took turns to have a look at a stand showcasing items, including key rings in different shapes of fish, Santa Claus, Doraemon, the 12 Zodiac animals and the Dharma Wheel of Buddhism; also everyday items like sofa mats, lanterns, tissue boxes and desk lamps.
‘This is the first time these items have been available at an event designated for craftsmanship, but it gained unexpected applause from audiences,’ said Nguyen Viet Nam, the stand holder.
‘I sold out of the packages prepared from my workshop to display at this event. Audience interest amazed me, particularly for items that seem odd in the modern era.’
Nam is the star of the Pho Trach Dem Village and the items showcased at the stand were his innovative products made from rush mattresses. Nam has a long story that reflects the links between the craft and him as a fate and much devotion. Last year, he returned to the village after almost six years working far from home to earn a living. Nam describes the coming back as a return of love to the craft. He turned the family’s living room into a workshop and started working on designs that he made up himself during the time he lived in Quang Binh.
At first, he categorized his designs into easy and hard. With the ‘easy’ list, which included products that do not require complicated knitting skills, Nam bought mattresses made by local artisans and cut them out into pieces in a size that he needed for making products. Nam himself did the knitting work to make items that are hard to make.
‘I was born on a mattress. Thus, I learnt the craft techniques since I was a little child,’ he said. ‘Knitting is nothing hard for me, but I use it for tough designs. With items that could be used cut mattress pieces, I bought mattresses from locals to help process them.’
Nam now has almost 150 samples that he made on his own, including household items, key rings and toys for kids in the shape of cars, planes, and trains.
Nam determined that only creativity would work, as traditional handicrafts cannot compete with industrial mass products; thus, a transformation into creative items would yield a market breakout for the village’s craft.
But this is not the first time Nam invested his efforts to equip the village’s traditional products to be a market trend. During 10 years working as the deputy head of the village’s agriculture co-operative, Nam organised a team of experienced artisans in the village to produce handbags, sofa mats and hats using the knitting technique. The products became popular in local markets before the market segment was overwhelmed by trendy fabric hats and plastic bags. Nam failed to rescue the cooperative’s knitting workshop and he left the village in 2010.
Far away from home, Nam always felt homesick, both for his wife and daughters and for the beloved craft. Designing work helped Nam kill the homesickness. Nam’s comeback is just right in time. Trendy organic consumption has made consumers eye handmade products, especially those made from natural materials like the rush plant.
A supermarket specializing in organic husbandry and agriculture products imports Nam’s bags for its shoppers. He is also contracted by shops and craft outlets in Hue, Da Nang and HCM City as a sole supplier for creative rush plant knitting items.
Nam is busier and busier and more contracts mean the sale of rush mattresses. In the context, he is a truly star of the village.

Text by Ha Nguyen and photos by Nguyen Van Loi