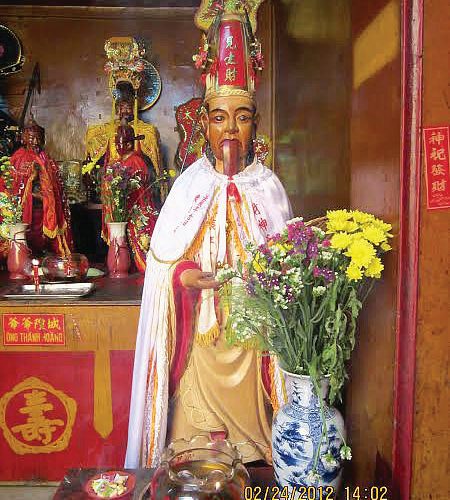 A tale of two spirits

In many Chinese shrines and temples in Ho Chi Minh City, one can see a figure covered in completely black or white, with a fan in his hand. Folks call him the ‘Underworld’s God of Wealth,’ ‘Local God of Wealth,’ or ‘Spirit of Impermanence.’
In Chinese mythology, the Spirit of Impermanence is a low-ranking deity in the underworld, but he is a horror for the people of this world, because it is believed that he is delegated by the Lord of the underworld to collect the souls of the dying and the sinful.
There are many kinds of Spirits of Impermanence. But among the Chinese, the Black Impermanence and the White Impermanence are the most popular. The difference is that the Black Impermanence wears black with a message written on his hat, ‘Seeing me means death’ or ‘Peace over the world.’ The White Impermanence, on the other hand, wears white with a message written on his hat, ‘Seeing me means prospering’ or ‘Seeing me is fun.’ That’s why the White Impermanence is more revered by the folks.
The White Impermanence, besides performing his duties, loves teasing people. Folklore has it that if a person, upon seeing the White Impermanence is scared and runs away, it will chase him with shouts that will make the running person die of fear. So one should not be scared and should not run. Instead one should stand their ground and imitate its movements, and then it would naturally begin to imitate him. The person should throw rocks and mud at the spirit, and it would throw back the precious things it wears on its neck until the last item. It would then lose, run away and lament. The person would get rich. That’s why it is written on the spirit’s hat ‘Seeing me means prospering.’
In Ho Chi Minh City, originally only Phuoc Hai Temple, 73 Mai Thi Luu St., Dist.1, HCMC, had an altar for the Underworld’s God of Wealth. But recently the spirit began to appear in many other Chinese shrines and temples. The reason for this ‘spread’ is perhaps, besides the traditional customs brought from their homeland, surely brought the ever-increasing desire for wealth and fortune.­