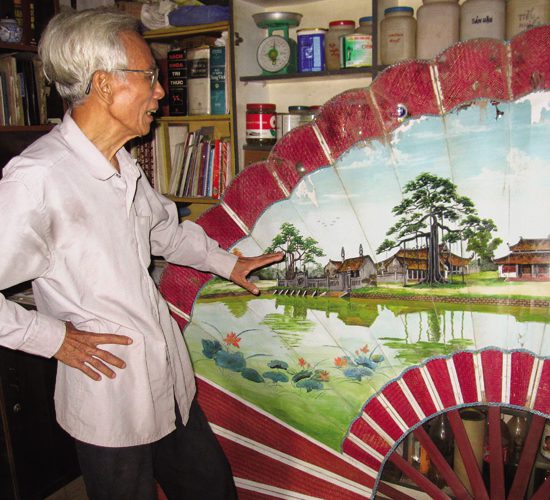 After the electric fan and the tractor

Vietnam Heritage, May-June 2011 — Mr Duong Van Mo said nobody knew when fan-making had begun in his village, Chang Son, in Hanoi’s Thach That District, but it had been passed down through three generations in his family to his children. Mr Mo could make fans when he was eight.
The craft in Chang Son has had highs and lows. It suffered when electricity reached the district. Many households, including Mr Mo’s, changed to carpentry.
Afraid of losing his ancestors’ traditional craft, in 1986 Mr Mo used his free time to collect old fans to study, aiming to restore the techniques.
A French Vietnamese asked him to make a fan 1.8m wide, to take to France to decorate his house.
Mr Mo used rattan, bamboo and mulberry paper. He drew Thay Pagoda on both sides.
He made more large fans for visitors from far away. He spent a lot of time and energy going to places with beautiful landscapes to sell his fans and take photographs from which to create pictures to go on fans.
The first revival fans were for the theatre as well as house-decoration. They were two metres wide, with spokes (nan) 80 cm long. They were painted with pictures of Vietnamese villages. They quickly became a phenomenon in the village and the village began to gain a reputation. ‘At one time, foreign visitors came to my house to place orders every day. Most were tourists from France, Japan, South Korea and the USA.’
The structural work on a fan with a 2 m diameter takes at least a week. Painting takes three more days. ‘I am very careful, so I can’t do it very quickly. Now we have machinery and equipment to make the work easier, but I still prefer the traditional way. Only doing it by hand can make it more beautiful.’
Mr Mo said he never used a bamboo that had a broken top or smelt bad, because it was likely to have borers. He buys the bamboos. He cuts them into sections, puts them in bags submerged in a pond until a thin, white layer inside the tube comes off. The bamboo must be completely dry and made smooth before use.
In 2009, Mr Mo made a fan nine metres wide, with 11 spokes, weighing 20kg, for the Van Ho Cultural Exhibition Centre in Hanoi. He then made two fans seven metres wide for the Hue Festival of 2009 and has recently finished 20,000 fans 25 cm wide to an order from a French Vietnamese art scholar.

About 30 km west of Hanoi’s centre, Chang Son village, Chang Son Commune, Thach That District, Hanoi, is famous for wooden handicraft. Its name in the past was Nua Chang, ‘chang’ being a carpentry tool. By 1956, Nua Chang was called Chang Son. Products include rattan, bamboo, printing, paper fans and chopsticks.
Chang Son is one of the oldest villages in the country. Its most traditional and best known craft is woodwork. It is also proud of having made a 9 m-wide fan displayed at Flower Fair Hanoi 2008 and included in the Guinness Book of Records. Its products compete with dozens of wooden products of other villages in the North.
Going to the village, customers can choose materials and can take a model to the village and ask artisans to make accordingly.
Nowadays, most of the villagers know woodwork. Recently some households have been sensitive to investing in machinery, sources of orders, product designs, expanding space.
Even the oldest artisans do not know precisely who started the craft. Many shrines have been set up in the village but none to the forefather of the occupation. According to the elders, Chang Son has been famous since the Hung dynasty.
Whenever there were constructions or mending of palaces, tombs, temples, royalty always called on Chang Village. Only talented, skilled and careful artisans could carve the intricate and sophisticated forms.
Chang Son’s reputation spread widely. Artisans were invited to China to participate in building palaces, tombs and temples of the Ming and Tang dynasties.

Mr Au in his plough-and-harrow workshop.

Van Duong Village, Hoa Phong Commune, My Hao District, Hung Yen Province, northeastern Vietnam, is famous for ploughs and harrows to be drawn by cows or buffaloes in rice paddies. It has sold all over northern Vietnam.
Villagers say, proudly, no doubt, that Ming Chinese invaders cut the right hands of the village’s young men so they could not make weapons. Fortunately, though the young men scattered, they returned after the scourge.
Van Duong [Vân D??ng, in Vietnamese] was mainly known for harrows and demand for ploughs grew later. When, exactly, no one knows. Sixty-four-year-old Mr Pham Hong Cau said, ‘No family-tree book contains the history of the craft of the village. The communal house was built 207 years ago so the craft might have come into existence at the time.’
Although they still worship the founder of the craft at a shrine in the communal house, nobody can identify him (it was a man). They know only that nobody is allowed to say ‘búa’. ‘Based on that fact, we guess Búa was the name of the founder,’ Mr Cau said. It is a Vietnamese custom to avoid saying the name of a respected person like the king or the founder of a profession.
Mr Cau added that craftsmen were not allowed to draw a design, at least partly because it was feared the craft could be stolen.
The harrows are from 1m to 1.2m wide with nine, 11 or 12 metal teeth in one line.
Mr Nguyen Dinh Au, 65, said, after 50 years in the craft, ‘It requires skill and the craftsman has secrets to making different harrows . . . suitable to different rice paddies.’
The craftsman has to make the teeth, and prepare a piece of wood to hold them. On average, a craftsman can make only one harrow a day, compared with three or four ploughs.
The wood is Burretiodendron hsienmu of the Tiliaceae family. It is hard-wearing and can withstand sunshine and rain.
Mr Au said, ‘In the past, the wood was easy to find and every month we went to Lang Son Province, which borders China, twice to buy it. It filled our front yard. Later, a rule was issued to ban cutting trees in the forest. We had to buy small amounts from retailers in the region. We know it is illegal to use that wood but the harrows and ploughs should be made of that wood, so we have no choice.’
Mr Au added that except for the cast-iron ploughshare, which they had to place orders for, they could use scrap to produce the other iron parts. ‘We wouldn’t make a profit if we bought . . . for every part . . .’
Harrows were VND250,000 ($12.80) to VND300,000 ($15.4), dozens of thousands of dongs more than a plough. A craftsman could make a profit of VND30,000 ($1.54) to VND50,000 ($2.56) on an item.
Van Duong village chief Mr Vu Duc Thuan remembered when more than 600 households in the village were in production.
‘The making of harrows and ploughs could be seen and heard everywhere in the village. And vehicles were busy delivering the products most of the time,’ he said. ‘In the past [during the 1980s], we had to work very hard day and night to meet demand. Kids of seven or eight could help the craftsmen with some simple work.’
In the mid-1990s, when mechanization began in agriculture, tractors appeared on rice fields, pushing the craft of making harrows and ploughs ‘into oblivion’.
In early 2000, most of the households in the village changed their jobs to carpentry or carrying bricks on building sites. Now, Mr Au’s and Mr Cau’s are the only households still in the craft.
Mr Au looked proud because he had been able to hold out. ‘I can make about 40 to 50 plough-and-harrow sets a year, which is only one-tenth of the number in the past,’ he said.
When asked if the occupation would disappear, Mr Au said in a firm voice, ‘That day will surely come when old people like us pass away.’ Then he lowered his voice, ‘We might as well accept it. Times just keep changing. We will still do the job until we are physically too weak to do it. Because the occupation was passed on from our ancestors and we have been with it for three-quarters of our lives already. How can we leave it? We were born to do it, so we will do it until we die.’