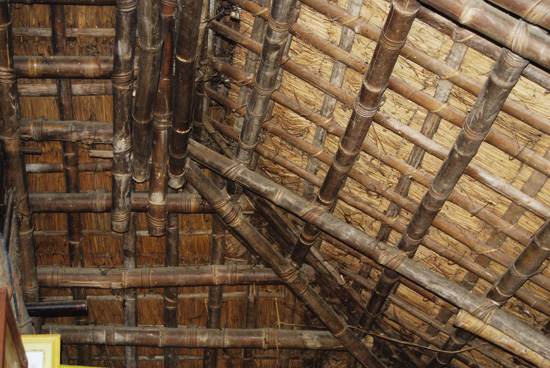 An ancient bamboo house and its loyal inhabitants

Vietnam Heritage, June-July 2011 — Mr Nam and his father were afraid there would be no more thatch to replace the roof when it deteriorated because the land where the reeds had grown wild had been taken over for farming

In Trung Phu 2 Village, Dien Minh Commune, Dien Ban District, Quang Nam Province, Central Vietnam, there is a house of bamboo almost a century old.
At noon, Mr Luong Hoai Nam, 65, returned from the farm to this bamboo house where he lit incense to his late father. Five generations, including Mr Nam’s grandchildren, have lived in the house. It has an earth floor, thatched roof and walls of bamboo wattle. The house is cooled inside by breezes from the nearby Thu Bon River.
‘My paternal grandpa was born in 1898 and died in 1968 when I was 22,’ Mr Nam said. ‘During my childhood, I lived in this house with my grandpa more than I did with my father.’
After getting married, Mr Nam’s grandfather left his parents’ house to live in another one. In those days, only wealthy people in the village could build houses with big columns standing on pedestal stones. The other villagers lived in simple bamboo houses with the lower ends of the posts in the ground.
‘My grandpa bought an old house. It had ironwood posts whose lower ends were in the ground for years without rotting away. According to my grandpa, the owner of the house had lived in it for more than 20 years . . .’
The circumferences of the lower ends of the posts range from 40 cm to 60 cm. Only four of the 36 posts have rotted at their lower ends. The roof frame of bamboo was submerged in water for a long time before installation and remains undecayed. The rattan was submerged in salty water to prevent borers and termites.
Mr Nam said the house had lasted nearly 100 years mainly because people had always lived in it and the thatched roof had always been repaired or replaced in time. These repairs had helped avoid leaking and moisture, and hence termites and borers. He had replaced the bamboo wattle walls, woven in the same way, in 1983.
‘Bamboo wattles are thin but these had been treated with a layer of Dipterocarpus alatus roxb oil, making them durable. If we know how to prevent termites and wood borers from eating away the bamboo sticks, they are very durable and valuable,’ Mr Nam said.
Mr Nguyen Thuong Hy, head of the special-events division at Quang Nam Province Centre for Conservation of Monuments and Heritage, said, ‘Houses like Nam’s family’s are very rare. I’m not trying to overstate it, but not more than five such houses can be found around the country.’
After returning home when the American War ended, 1975, Nam’s father is reported to have said the house must have received a ‘great blessing’, as it was still intact and his wife and four children were safe.
‘My father was poor but decent all his life,’ Mr Nam said. ‘After the war, he moved to work in Danang and lived in an apartment provided by the government. When he retired, he returned to live in the old house. It was my father who decided to keep this house as an inheritance of the family.’
Mr Nam and his father were afraid that there would be no more thatch to replace the roof when it deteriorated because the land where the reeds had grown wild had been taken over for farming. In 1983 they decided to buy corrugated iron to place over the thatch.
In 1985, Mr Nam and his father built a house with a tiled roof next to the bamboo one.
‘My father died suddenly last year, without having a chance to leave his words of wisdom to his children,’ Mr Nam said. ‘But I know his love for this bamboo house. I’ve told my children to do their best to retain this house. If they want to repair something, they must do it carefully so as to keep its original form.’

Text and photo By huynh van my