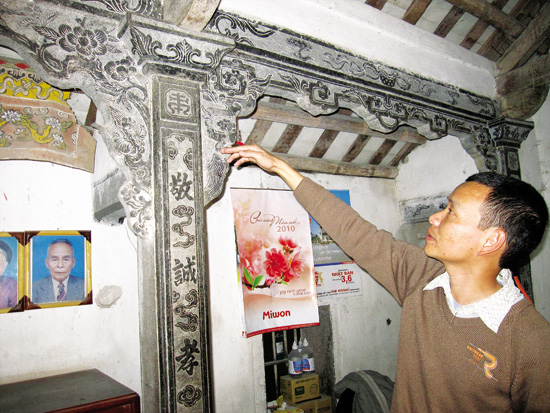 Vietnam Heritage, August-September 2011 — Being a stonemason living in a village specialising in stone products, Mr Do Khac Duc, of Ninh Van village, Ninh Binh Province, 90 km south of Hanoi, decided to build a beautiful stone house for himself. But he was afraid his wife would not agree, as they were so poor they did not have enough rice to eat. So he told his wife that he had received an order to build a stone house, and brought stones home for his wife and children to work.
Mr Do Khac Hoang, 60, the eldest child of Mr Duc, remembers the days he shaped stones with his mother to make pillars. He said: ‘I was eight at that time. My father used to give me money for cakes, so I would have to work with my mother. A big stone would be placed on sand, and we used smaller ones and water to rub it into shape, either round or square.’

The capital of a square pillar

The wife often asked the husband: ‘Why don’t you ask for some payment for this house?’ He would answer that the customer would pay after the house was built. After four years of work – from 1954 – the stone was ready. The wife was surprised when she saw her husband calling their relatives to help erect the house on the plot their ancestors had given them.
Mr Hoang said, ‘The pillars were very heavy, so a lot of relatives and also neighbours came to give us a hand. There was no cement at that moment, so our dad had to use cooked sugar cane juice mixed with lime to make a glue that could stick stones together.
‘I can still remember that though our stone house was just a 40-square-metre house with three compartments [in the countryside houses are usually much bigger], it was a uniquely beautiful house that no one had ever had. It was not only our village people who were amazed. People from the province or other places also come to our house for a chance of viewing it.’
The amount of stone used to ran to tens of cubic metres. Stone was plentiful on mountains near the village, but to get it out was a huge effort, as there were no machines. Holes had to be made in mother rock and wedges and hammers used to break pieces away. It took a mason a morning to make just one hole.
Dun mountain (Núi ??n) is where Mr Duc used to get stones. After months of wedging stone away, he had to wait until the level of water in a waterway rose and used banana trees to make rafts to carry it to the village. He also used wooden rollers.
Smoothing a parallelepiped pillar took a month; a cylindrical pillar took almost two months, then more months to carve and engrave.
In 1962, a storm destroyed almost all the houses in the village, but the stone house stood firm. In 1985, Mr Do Khac Duc was officially recognized, by the Government, as an ‘artist’.n