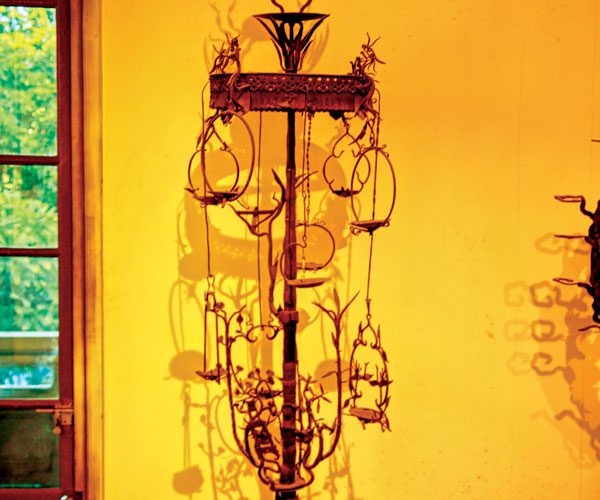 Lamps are part of human daily life and spiritual activities. The Vietnam National Museum of History has a collection of lamps starting from the Bronze Age, the era of Dong Son civilization, (most notably, the one in the shape of a kneeling man found at Lach Tuong, Thanh Hoa), through the subsequent historical periods until the era of Nguyen Dynasty in early 20th century.
The collection includes iron lamp racks in the form of a dragon, phoenix, ‘ivory bamboo decorated with dragon and phoenix,’ ‘nine dragon formation’ and wooden lamp stands in the form of ‘ivory bamboo turned dragon,’ or decorated with elephants, dragons, apricot blossom and lotuses. Made in the themes of four marvels, four seasons, flowers and plants, they demonstrate skilful craftsmanship and the sophisticated sense of beauty of ancient artisans.
The 1.5m tall rack in the form of ivory bamboo decorated with dragon and phoenix is an original one. It has a trunk in the form of ivory bamboo, with dragon heads and bodies flaring out of its branches. The bamboo tree is also decorated with the four season symbols which are pine, mum, bamboo and apricot.
Hanging on the bamboo branches are the phoenixes whose flapping wings serve as lamp plates. The bird seems harpooning downwards but its head is turning up with its crest like a waving flag.
The combination of dragon, phoenix and the four season theme is a style prevalent in decorative art during the Nguyen Dynasty.
The ‘nine dragon formation’ is another bright example of this era’s art. The nine dragons form the support, their heads half hidden in clouds. They are supposedly spitting water to bath the newborn Buddha. The 28 lamp plates arranged in four directions stand for the 28 stars used by astrologists to predict weather and human fates. This is a typical combination of Buddhism and Confucianism seen throughout Eastern Asia.
The carved wooden stands are another interesting part of the collection. The one decorated with elephants, dragons, apricot blossom and lotus is a remarkable example. Three softly curving dragons form a strong support for the 1m tall stem. The dragons are bathing among apricot and lotus flowers. In the upper part, little elephants stand in lotus-like lamp plates, their prominent forehead being the stand for an individual lamp. The whole piece is a work of art, embodying Buddhist and Confucian concepts, national characteristics and folklore themes.
The collection of lamp rack and stands shows how our people used light in everyday life, official ceremonies, festive activities and religious rituals. To a certain extent it also reflects the life content, transformation of ideas and development of cultural interpretation.