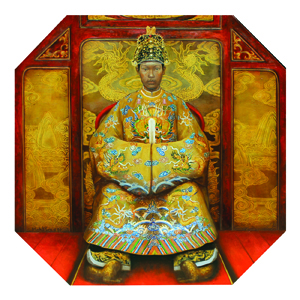 The exhibition currently showing at the Craig Thomas Gallery in HCMC is inspired by Vietnamese history and by the rich and colourful royal costume and architecture of Imperial times. It is a perfect fit for a periodical that calls itself ‘Vietnam Heritage Magazine’. As one of my fellow viewers remarked, ‘It is bold for a contemporary artist to paint in a mainly realistic way’ and Tran Minh Tam does so breathtakingly, portraying royals in painstaking and meticulous detail.
Here, the paintings clearly show an artist enamoured of his country’s history and heritage, but Minh Tam is no traditionalist. The last time I reviewed an exhibition of his was way back in 2012 and I saw him from a completely different angle then. His works then featured transparent plastic bags filled with water. He opened up my eyes to the wonderful play that light shone on plastic and water can have. Honestly, I have never looked at a plastic bag in the same light since. People in the arts, once they have found a winning formula, are often content to repeat it over and over again albeit maybe with variations on a theme. You can not blame them. It is usually hard to make a living in the arts. Tran Minh Tam, I have learned, is a man not content to stand still.
There is a story behind this exhibition and, as the artist was in attendance, I got it from the horse’s mouth. Some while ago, Minh Tam witnessed the sad demolition of an old French colonial villa. He took his inspiration for his latest exhibition from seeing some discarded, broken-up pictures of the old days in Hue, the ancient capital. He was able to salvage some of the wooden furniture and frames, which he has actually used for some of these paintings. So you can say this artist not only depicts his own land’s heritage, but he actually recycles it!
My family’s home sits on historic Chi Lang Street in Hue, so I am familiar with many of the palace buildings and rooms together with glimpses of Hue landscape and the Perfume River, which Minh Tam uses to frame these portraits of notable figures from the dying days of Vietnam’s era of Emperors. I am told he made numerous visits to Hue in order to get the architecture right. As with so many contemporary artists, this one is a colourist with vivid hues of gold and red dominant. So well are you taken back into time that another habitué of the gallery’s premieres, a Frenchman called Jerome was heard to remark, ‘It is if you were actually there in the pagoda!’
Perhaps part of the success is due to the innovative use of materials. With wood as a base and for framing, there is a unique use of oil and lacquer to project the glory and splendour of these personages and the apparel they wore, now lost in the mists of time.
Several pictures depart from the norm of strict adherence to reality and they provide a new angle on the artist’s work and view. How you interpret this is entirely up to the beholder. One stout fellow seems to have clouds above his head forming a halo. (A reflection of the belief that royalty gained its power from the mandate of Heaven?) Another example seems to be dragging the past into the present as a royal lady sits in the Hue landscape in a modern wheelchair with black toxic cloud behind her head.
Hopefully, I shall have whetted your appetite for a trip to see this free show. You may even, if you have the available funds, wish to take a piece home with you. The paintings are modestly priced from $2,500 to $10,000. Given that the artist is still fairly young and his reputation is likely to grow and grow, it is probably worth the purchase from the investment angle alone. I, for one, certainly would like to have one in my work or home. It would be a constant feast for the eye and transport me away from my daily reality of noise and motorbikes to a not-too-distant Vietnam that was once tranquil, beautiful and graceful.

The exhibition ‘The House of Nguyen 11’ (Nha Nguyen 11) by Tran Minh Tam is on display at the Craig Thomas Gallery from 28 July until 26 August, 2017 at 27I Tran NhatDuat Street, Tan Dinh Ward, District One, HCMC.