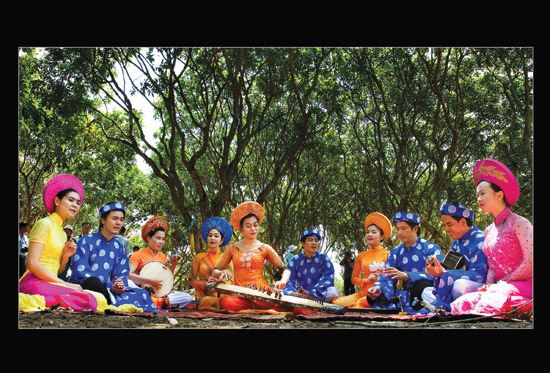 Folk music heritage recognized
The art of Don Ca Tai Tu’s music and songs in southern Vietnam has officially become a recognised UNESCO Intangible Cultural Heritage of Humanity.
Known as a musical art that has both scholarly and folk roots, Don Ca Tai Tu, developed in southern Vietnam in the late 19th century, is performed at numerous events, such as festivals, ‘death anniversary’ rituals, and celebratory social events. The audience can join in, by practicing, making comments or creating new words for songs.
vietnamnews.vn, 6 December

Not good luck for the buffalo
By Nguyen Van Son
Annually, the Cotu people in the South-Central Province of Quang Nam harvest their rice in the 10th and 11th months of the lunar calendar (November and December this year).
After the harvest, they celebrate. To prepare for each rice festival, they make rice liquor and rice cakes. Villagers organise a sacrifice ritual, during which a buffalo is stabbed to death.
The buffalo’s blood is put on villagers’ foreheads for good luck, good health and a bumper crop the following year. Part of the meat is divided among villagers and the other part is cooked into dishes for people to eat after the ritual.

Party for Buddha
www.thanhniennews.com, 25 November
Vietnam will for the second time host the United Nations Day of Vesak, Buddha’s birthday, enlightenment and passing away, at Bai Dinh Pagoda in the northern province of Ninh Binh from May 7-11, 2014.
The event is expected to attract about 10,000 participants, including 1,500 Buddhist leaders, scholars and followers from around 100 countries and territories worldwide.
Vietnam first hosted the Day of Vesak in Hanoi in 2008.

Hello, deer
vietnamnews.vn, 28 October
A rare deer (Muntiacus vuquangensis), an endangered species classified by the International Union for Conservation of Nature, has been found in a reserve in central Thua Thien Hue Province. The deer, which was first discovered in central Ha Tinh Province in 1994, is endemic to evergreen forests in central Viet Nam and central Laos.

Unique ox caught on camera
www.theguardian.com, 13 November
One of the rarest and most threatened mammals on earth has been photographed in Vietnam for the first time in 15 years, renewing hope for the recovery of the species.
The saola, a long-horned ox, was photographed in a forest in central Vietnam in September, WWF said.
The animal was first discovered in the remote areas of high mountains near the border with Laos in 1992, when a joint team from WWF and Vietnam’s forest control agency found a skull with unusual horns in a hunter’s home. The find proved to be the first large mammal new to science in more than 50 years.
Twenty years after its discovery, little is known about saola and the difficulty in detecting the elusive animal has prevented scientists from making a precise population estimate.
At best, no more than a few hundred, and maybe only a few dozen, survive in the remote, dense forests along the border with Laos, according to WWF.