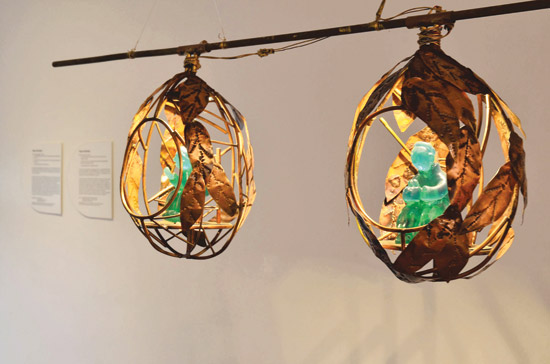 Sculptors coalition
A group of sculptors living and working in Hanoi gathered in early 2013 for a contemporary sculpture project called ‘New Form.’
Under the project, the sculptors discuss ideas and collaborate in turning the ideas into works, as well as how to present them to the public. The project, expected to last about three years, had its first exhibition in November in Hanoi.

Japanese artist dyeing in Vietnam
www.thanhniennews.com, 5 December
When Mika Toba visited Vietnam nearly 20 years ago, she came with the feeling that she had reached a creative impasse.
One of the Japanese artists who has introduced Japan’s stencil dyeing technique katazome into paintings, Toba had by then created several works following the technique’s traditional patterns, like flowers, grass, trees, birds and fish.
But, she always felt something was missing.
The artist finally found that missing piece in Vietnam, when visiting Ho Chi Minh City in 1994.
‘I was attracted by the colorful Vietnamese scenes, so I sketched them and felt they were suitable for katazome.’
Since then the artist, now 52, has regularly visited Vietnam and captured daily scenes across the country in her works: from an electrical post where numerous wires thickly tangle with each other, a railway track that goes by old houses, a part of canal with make-shift houses along its sides, to a corner of Hoan Kiem Lake in Hanoi, and the boats on the Saigon River where people live and work.
‘Every scene in Vietnam, from trees, villages, beaches, to street to corners, is lively and distinctive,’ Toba said.
They reminded her of Japanese landscapes during the 1950s-1960s.
Over more than 50 trips, she created several dozen works that have been featured at five Vietnam-themed exhibitions organized in both Vietnam and Japan since 2001.

And so the wheel turns
Thanh Nien, 16 December, 2013
More than a thousand beer cartons fell off a truck and onto the streets as the truck had a near-accident in Dong Nai Province in December.
Passers-by rushed to take all of them, despite the driver’s begging. The news went viral and readers sent more than $10,000 to help him cover the accident. Yet the beer producer, Vietnam Brewery, decided that he did not have to pay the damages. So the driver returned all the money donated.

The charm of the old days
vietnamnews.vn, 19 December
When British artist Lee Kirby uploaded a YouTube clip featuring him singing the Vietnamese ballad ‘Diem Xua’ in 2009, he didn’t expect to create a phenomenon in Vietnam.
No one could imagine that a man who spoke only a few simple Vietnamese words could perform the famous and emotional song – and with very perfect Vietnamese pronunciations. The clip attracted hundreds of thousand viewers.
‘The great feelings I had for the country and the people of Viet Nam, as well as the wonderful song Diem Xua, inspired me to learn more Vietnamese songs,’ the 34-year-old singer said.
Four year after the phenomenon, Kirby recently released his debut album ‘Vietnam Oi.’
The album features nine Vietnamese songs by famous local composers and songwriters, including Tran Tien, Phu Quang, Le Minh Son, and Truong Quy Hai.
The album is a result of Kirby’s three-year plan aiming to improve his Vietnamese, to learn more about Vietnamese culture, and to strongly integrate into the unique culture of Vietnam – which he calls his second homeland.
‘Another main purpose of my ‘big plan’ is to sing for the Vietnamese people across the country,’ he said.
To implement his plan, travelling with his guitar and some Vietnamese friends from 2010 to 2013, Kirby made several journeys through the country from the North to the South.

Mot, hai, ba, yo!
Lao Dong, 12 December, 2013
In 2012, Vietnamese drank three billion litres of beer, or three billion dollars’ worth, causing Vietnam to rank third in Asia and 25th in the world for beer consumption. The figures in 2013 are expected to be the same, despite the economic downturn. It is expected that Vietnam will become Heineken’s biggest market by 2015.