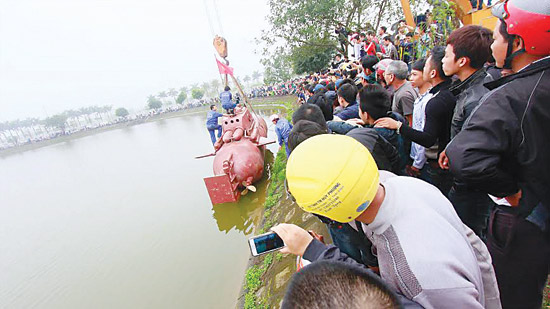 Look out below
tuoitrenews.vn, 29 March
Vietnam’s first domestically made submarine, Truong Sa, which was built by a private company in northern Thai Binh Province, has successfully completed its second trial run in a lake in the province.
The sub was named after Vietnam’s Truong Sa (Spratly) archipelago in the East Sea.
Nguyen Quoc Hoa, director of Quoc Hoa Mechanical Company, who designed the sub, steered it on the surface of the lake safely for about two hours, with all parts of the vessel operating properly and smoothly.
As the lake is only 2.5-3 metre deep, the sub could not travel underwater, Hoa said.
In the first test run for the vessel conducted January in a water reservoir, Truong Sa travelled well both underwater and on the surface, the sub’s designer said.
Truong Sa is about nine meters long and three meters wide, and has a displacement of 12 tons when it is submerged and 9.2 tons when it is on the surface.
The vessel is expected to be able to operate for 15 consecutive days at sea, at a speed of 20-25 nautical miles per hour within a radius of 800 km.
It can dive to a depth of 50 metres and stay on the seabed for 15 hours.
Hoa, six other engineers and more than 30 workers began to build the submarine in August 2012, Hoa said, adding that he imported special steel that is 15 mm thick to make the body and the prow of the vessel.

New and improved
www.thanhniennews.com, 24 April
Hoi An installed checkpoints and blue-shirted guards to make sure visitors pay $6 (foreigners) or $4(Vietnamese) for entering the old town.
The fee was introduced in 1995, but enforcement was not as strong as it is now. Also, the unfriendly attitude of some security guards who harassed visitors on the street caused objection from the public.

Learning about the birds and beasts
vietnamnews.vn, 21 April
Wildlife education began last year with support from non-profit organisation Wildlife At Risk (WAR). It was done on a pilot basis in schools in Binh Thanh District, Ho Chi Minh City, but is soon set to become city-wide.

Earth day
vietnamnews.vn, 21 April
The Ministry of Planning and Investment in April announced a national action plan on ‘green growth’ that focuses on reducing greenhouse gas emissions and increasing the use of clean and renewable energy.