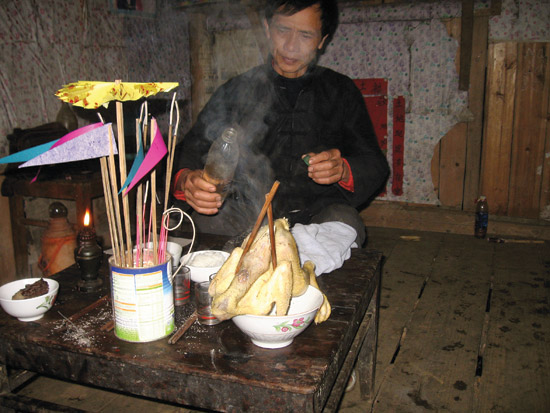 Children of the Corn
By Nguyen Thi Minh Tu*
Tu Di is an ethnic minority in Lao Cai, northwestern Vietnam. There were about 1000 members in 2000, living mostly in Muong Khuong District.
A salient feature in the culture of Tu Di people is the ritual for pregnant women when their pregnancy is at the three month mark.
The husband goes seeking a shaman, bringing with him three corncobs, three rice ears and three cans of sticky rice to give the shaman. The number three reflects the 3rd month of pregnancy. The shaman then chooses an auspicious day for the ritual. Offerings include three plates of sticky rice (cooked), three cans of rice, three corncobs, three cups of liquor and a bowl of water.
The offerings are placed on an ancestor’s altar. After the ritual, the shaman gives the couple one of the corncobs for them to put on their bed and keep until the baby is born. Another corncob stays on the altar and the last one thrown out in the garden as a wish for fertility.
*The author works at Lao Cai Department of Culture, Sports and Tourism

Local singer putting the ‘M’ in MTV
www.thanhniennews.com, 30 July
Singer My Tam has been chosen to represent Vietnam in the South East Asia regional round at the annual MTV Europe Music Awards (MTV EMA) in Amsterdam on November 10.
Tam is the first Vietnamese artist to compete in the MTV EMA.
Tam beat out ten other local candidates, receiving more than half of the 65,000 votes registered by fans throughout Vietnam.

For your safety
www.thanhniennews.com, 12 August
The Ho Chi Minh City government has ordered police to be stationed at all major downtown streets to protect tourists and locals from street crime.
The city has also given permission to police in District 1 to set up street cameras for surveillance.

There goes the neighbourhood
www.thanhniennews.com, 16 August
More than 200 old French villas that made Dalat famous have been abandoned, remodelled or are falling apart.
Eighty-three have been rented out by Dalat House Management Office to 561 households, totalling around 2,000 people, while 64 are used as the offices of various local agencies and organizations.
Most of the villas used as offices have been expanded and many of their grassy outdoor areas have been paved over with cement.
The villas used as accommodations for public employees, workers and vendors have also been modified with new restrooms, bathrooms, kitchens and garages added.
The city started a plan in 2003 to take back 83 villas, but only 12 of them have been recovered.

Top cop is a lady
www.thanhniennews.com, 15 July
The 51-year-old director of the Kien Giang Province Police Department, Bui Tuyet Minh, has attained the highest rank ever in the police force by a woman officer – Major General.
Minh, a native of Kien Giang who joined the police at the age of 19, was also the first woman to become the director of a provincial or city police department when she took over her current job in 2011.

Those fearless riders
There are more than 500 motorbike taxis, or xe om, operating out of the Ben Thanh Market area, downtown Ho Chi Minh City, according to Tien Phong of 5 March. 220 of them are part of a guild and wear a uniform.
Many tourists are afraid to cross the road in front of the market where traffic concentrates, so they choose to take a xe om for VND10,000 (about 50 cents).
The drivers earn an average VND100,000 per day or VND3,000,000 ($140) a month. The minimum wage set by the government is about $50 a month. Most of the drivers are men, and some work overnight.

Here come the Nguyens
tuoitrenews.vn, 2 June
It is predicted that in the next decade, the Vietnamese surname Nguyen will overtake Smith, the most popular last name in Australia since 1903, to become the most common metropolitan Australian surname.
The Vietnamese surname Nguyen is now the 13th most popular family name in Australia.
The data also showed Nguyen is the third popular last name in Sydney, second in Melbourne and seventh in Adelaide.
A report published by The World Geography in 2012 showed Nguyen is the 4th most common surname in the world, after Li or Lee, Zhang, and Wang of China.
‘The prevalence of Nguyen as a family name in Vietnam extends to outside of the country, where many Vietnamese have emigrated. Nguyen is the 54th most common in France. In the United States, it is the 57th most common family name according to the 2000 Census, as well as the most common exclusively Asian surname,’ the report said.
Nguyen is also the most popular family name in Vietnam, as it accounts for nearly 40 percent of Vietnam’s population.