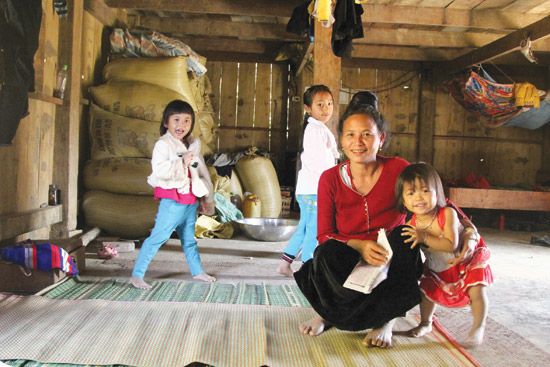 It was getting cold when I came to Pa Xa Xa Village, Pa Thom Commune, Dien Bien District, near the border with Laos. Beside the fire place, the villagers told me their myths. 58-year-old Quang Thi Say is the village’s living history record. I was most impressed by her story about her people’s family names and how they related to specific animals. Choosing the family name of the Kho Mu is their unique custom. They imitate certain movements of the totem animal, to prove that they belong to that animal’s species.
Mrs Say said that each Kho Mu family name has its own origin, usually related to some animal. For example, the Quang (fox), Luong (civet) and Lois (eagle). Others include Rvai (tiger), Tiac (deer), Ho Hoa (monkey), Oive (otter), Mar (snake) and Kumbur (pangolin).The Kho Mu have very strict rules about dealing with the family totem. Seeing one’s own totem, one should refrain from killing it. The Kho Mu still lives by hunting, but hunting one’s own totem is forbidden because they believe they will become their totem animal in the next life. If one sees a dead totem animal, one must bury it. Eating one’s own totem is the worst blasphemy. This rule is so strict that if someone has eaten his own totem animal, and washed his hands from a container, others have to throw away all the water in it.

The hunters of Kho Mu regard their totems as culinary taboo

Mrs Say told me that Luong Van Kenh and Luong Van Sa came to a visit a friend on New Year’s Day in 2013. At dinner, they ate without asking what meat was served. Then their hearts fell when they learned that they just ate a civet. Soon after that, both lost all their teeth, making all the Kho Mu fearful. To verify this, I went to Xa Cuong, but the men were not at home. However the villagers said the story was true.
Beside totemic beliefs, the Kho Mu people also have some other customs. For example, the ‘kinh coong’ dish. In Kho Mu, ‘coong’ means vegetables in general, including chilli, onion, garlic and egg-plant, plus rotten meat. ‘Kinh’ means a miscellaneous soup. ‘Kinh coong’ is a vegetable soup with rotten meat. This special dish is a must for weddings, New Year’s or other festivity. The meat must be hung above a kitchen for weeks and sprayed with water every day to remain damp. Thus, it gets infested with flies, and with them comes bacteria, and the meat acquires the desired flavour. To prepare it, they stew the meat until it falls off the bone completely. Then, they add the vegetables and some rice powder to make it thick.
Another example is their planting dance. Every spring, the Kho Mu performs a dance with their special sticks attached to musical instruments as a way to be one with the Ying and Yang, to pray for a better life.
Each stick is 1.8-2 m long with a sharp end, which is sometimes even iron-plated. The sharp end is normally made of strong wood. The other half is made of bamboo and attached to small bamboo pipes with a little pebble inside. When moved, these rudimentary instruments make joyful sounds amidst the misty, dreamy world, waking up the mountains and forests.
Strong men walk at the front, in a line, shoulder to shoulder, dancing and thrusting their sticks into the soil, making tunes that call everybody to work. Young women follow them, throwing seeds into the new holes then levelling them with their feet. The whole company moves gracefully in unison to the songs.

Text and photos by Dong Xuyen