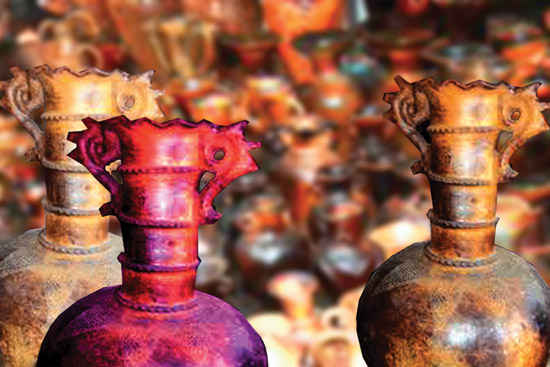 Bau Truc carves a pottery niche without wheel or kiln

Dang Chi Quyet, chief of Bau Truc Neighbourhood in Phuoc Dan Town of Ninh Phuoc District, Ninh Thuan Province in south Central Vietnam, recently finished a very important neighbourhood meeting one morning at 11:30 a.m.
Quyet said, ‘We had a meeting to discuss the way to promote the development of our village’s pottery craft. We’re going to build a fence for the pottery product exhibition house and a temple to worship the craft founder.’
He said that Bau Truc Pottery Village has just been chosen as one of three major tourist attractions in Ninh Thuan.
‘Now, the whole village is bustling with business, and we officials are busy all day long,’ Quyet said.

More than 15 years ago, the pottery craft of Bau Truc Pottery Village, where Cham people have been making pottery for hundreds of years, was thought to be coming to an end. Only a few out of the village’s more than 400 households were making some pottery products for a living. They made things like pots and jars and carried them around to sell. Now, the craft has been resurrected.
‘Nobody thought Bau Truc Pottery Village would be like it is today,’ 65-year-old Dang Thi Phan, owner of a pottery workshop, said.
At noon, Ms Phan was still busy working with her employees at a working table with lots of clay. ‘We must try to make use of sunshine. We need to make enough products to dry so that we will have enough to put in a heap to bake. We must rush against time to produce enough for a contract,’ Ms Phan said, her hands working on a clay item.

Ms Phan, who has been in the craft for more than 70 years, said her village craft began to gradually develop again by producing fine art pottery in 2000 [the village used to specialise in household pottery]. Since 2005, many pottery workshops in Bau Truc Village have had customers who buy large numbers of pottery products. ‘Now we can’t meet the huge needs. We just try to keep the regular customers. That is good enough.’
Even during its lows, Bau Truc Village was still a tourist spot because it is an old pottery village where people make pottery items in a very special way. They don’t use a wheel to shape products, like elsewhere. Instead, the craftsman moves around the clay piece to create shape. The potters in Bau Truc have always made products with their hands and some simple tools such as cloth pieces, bamboo sticks, scrap steel wires and shells. After finishing an item, they put it in the sun to dry before putting it with the others in a heap on the ground, and covering them with straws and firewood to burn rather than baking them in a kiln.
The clay for making pottery products in Bau Truc has, since the old days, been collected from the village. It is a kind of silt that is especially soft and tough and is mixed with sand before use. ‘It is the way of creating shape and baking, as well as the quality of the clay that has given the fine art pottery products of Bau Truc a very special feature. They look modern, but they still bear an old soul,’ artist and sculptor Dang Nang Tho said.
Mr Tho is a native of Bau Truc Village.

A craftwoman at work in Bau Truc
Photo: Do Huu Tuan

Mr Tho said, ‘No two pottery products of Bau Truc, whether they are big or small, are identical, although the potters try to make them look the same and they are baked at the same place in the same way.’
Dang Chi Quyet said, ‘Bau Truc has a total 479 households and up to 180 of them make pottery products at home. More than 600 people are employed and people from about 90 per cent of the households in the village work in the craft.’
Also, according to Mr Quyet, what is new in the village is that the boys have rolled up their sleeves and worked with clay to make products, rather than just leaving it to the girls, like in the past.
Some of the pottery workshops in Bau Truc have thought of making household pottery items again. ‘My place has been making some [household items]. They sell quite well, so I believe more people will make household pottery items because they are good for health and the environment,’ Kieu Lan, owner of a workshop, said.

By Huynh Van My