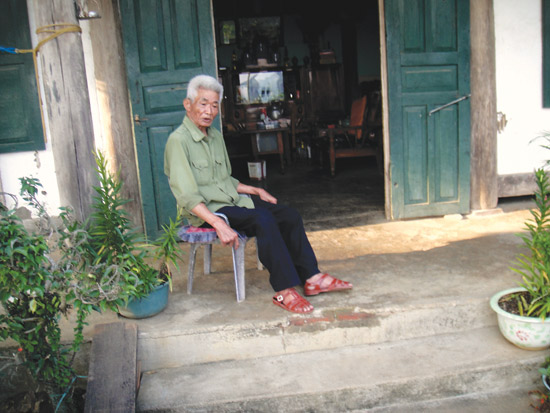 Beekeepers have a sweer and stinging life

Honey from wild bees of the northwest has been well-known as a scrumptious specialty since the olden days.
Knowing that I was inquiring about honey from wild bees, some men in the town of Bac Yen, Bac Yen District, Son La Province introduced me to Mr Nguyen Van Liu, an 30-year veteran of domesticating wild bees in the area. When I arrived, he was not at home; his grandchildren said that he was going around the neighbourhood to seek for ‘swarming bees’.

He explained: ‘Around the third month in lunar calendar every year, worker bees seek a place for the whole colony to make hives and avoid the rainy season or to move the colony from the nest they are living in; that’s why they’re called “swarming bees.”’
At this point, wild bee tamers use rackets to catch swarming bees and drop them in crates they have prepared beforehand. If the bees trapped in the crates find the conditions suitable, they will fly back and invite their colony to reside in the crates. Typically, the bees will be back after about two to five hours from the time they fly away to invite their colony.
According to Mr Liu, wild bees love clean environments, so if the boxes and apiaries are dirty or have any ants or cockroaches, they certainly do not live in there. In addition, the boxes have to be in dry and shady locations.
When I asked about the number of domesticated bees in Bac Yen District, Mr Liu said that the number might be up to hundreds of bee colonies. Those beekeeping veterans who are as skilful as Mr Liu in Bac Yen are Mr Trinh Xuan Thuc and Lo Van Inh; their bee colonies are up to 20 to 30 hives. The number of families with three to four bee colonies is larger. Each colony can give from three to five liters of honey per year, which brings decent extra incomes for the tamers-around VND4 to 5 million per year.
The difficulties in beekeeping are cultivating techniques. The farmers must understand the noises emanating from the bee boxes; if the flapping sound of their wings is strong and loud, it means that the honey is full and needs to be collected, or otherwise the bees will be hot. In the rainy season, if it is not urgent, the honey is not harvested, because at that time, the honey’s density is often diluted with rainwater. If the bees are noticed flying in and out erratically, the hives should be checked for fungus or mold. It is dangerous if the boxes have ants or cockroaches because the bees can leave at any time.
When the farmers check the colonies and detect that the number of colonies is large, they have to use a queen bee to separate the bees into different colonies, otherwise, if they let the bees separate by themselves, they will fly away immediately. When separated, the healthy worker bees all swarm to the new colony.
Where bees are separated suddenly from their colonies, sandy soil or water should be sprayed onto the centre of the colony so that the bees concentrate on a certain location. Waiting for the new queen bee to crawl out and check the number of the bees, the farmers capture it in the box again so that the bees split into new colonies.
In Bac Yen, there have been many times when the bees got angry, causing the beekeepers to flee their homes for weeks before daring to return. Mr Vu Ngoc Hung once separated the bee colonies, but unfortunately, about three weeks afterwards, the queen bee was dead, and the bee colony flew straight into his house, gathered in the rafters and began to attack the residents in the house. His family was so dismayed that they had to flee to a neighbour’s house and stayed there for weeks until the bees dispersed.
Wild bees are declining rapidly due to deforestation and crop spraying, especially herbicides, which poison the bees. During cultivation seasons, beekeepers have to keep their bees inside so that they do not fly away to collect pollen and nectar for fear of being poisoned.
In addition, some Hmong people pump smoke into the hives to collect the honey, irritating the bees.