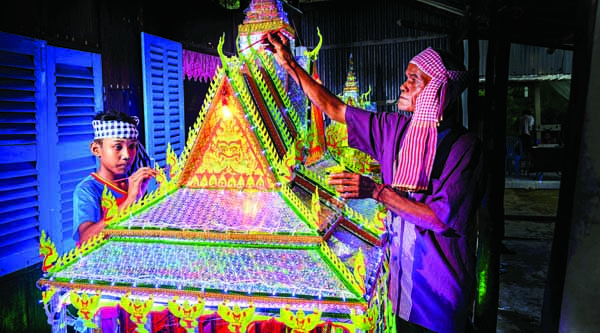 Praying to the gods for a good crop, a ritual in the Loi Protip Festival

A procession on the water before releasing the Loi Protip

It’s an ancient custom that on the full moon of the 9th lunar month (this year falls on 3 November), Khmer people conduct their Loi Protip celebration. This is a very special occasion, because it is both a Buddhist and traditional Khmer celebration in the Mekong River Delta region.
Among 13 provinces of the Mekong River Delta, Tra Vinh and Soc Trang Provinces have the highest concentration of Khmer population. Coming to Soc Trang and Tra Vinh on this day, visitors will have a chance to enjoy the bright colours of the floating lantern festival in Khmer villages.
During Loi Protip, people float lanterns as an offering to a tooth of Shakyamuni Buddha that the snake deity Nagar keeps in the Underwater Palace.
Loi Protip is also an occasion for people to show gratitude to the God of the Earth (PreaThorani) and God of Water (Preah Kungkea) for granting Khmer people health and good fortune. At the same time, people perform penitence for breaking ground, planting crops and fishing, which contaminate nature.
Besides being a spiritual celebration, Loi Protip also educates people to live in harmony with, be grateful to, protect and preserve nature.
A few days before the celebration, villagers gather to make big lanterns that are modeled after towers, temples and the snake deity Nagar. While the adults are busy making and adorning their big, impressive lantern, kids are also taking time to make lovely little lanterns to have their share of the full moon night fun.
After being completed, the lanterns are loaded with rice, salt and fruits as offerings made to the God of the Earth and God of Water.
On the evening of the full moon, the Protip (lanterns) are paraded around the village, accompanied by drums and traditional music, followed by villagers. As it moves, the train prays and blesses every house.
At the end of the procession, the lanterns put on a banana raft and together with multitudes of small lanterns, are floated in a river or canal, lighting it up, filling the air with a deep feeling of quiet happiness.