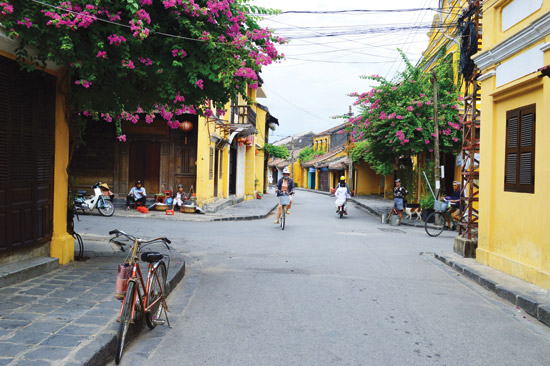 Between Hoi An and Danang

On arriving in Hoi An at dawn, a panorama spreads behind the sleeping bus windows; the bright yellow sea of ripe rice fields covered in the rosy voile of the first rays of tropical sun takes my breath away. Here, in Hoi An old town, as nowhere else in Vietnam sunshine bursts with amazing color combinations, soft, but clear, just as if they were carefully rinsed by some painter, who at very dawn is already standing before his folding easel with palette ready.

The bus squeezes into the narrow streets of the old town, touching electric wires and mulberry trees growing in the well-groomed dollâ€™s gardens. The squat houses made of clay with old-tiled roofs covered with moss and feral flowers are lit one by one by the morning sun. Itâ€™s 5:30 a.m. I have three hours left till the shuttle bus to Sandy Beach Non Nuoc Resort Danang Vietnam, Managed by Centara departs. So I take my time and go for a stroll through the sleepy town. Here and there, on the small streets,the first early birds appear: food sellers with boiling pots just taken off the shoulder on balance-beams and gaggles of their clientele craving breakfast. Boiling in the casseroles right on the pavement is â€˜cao lauâ€™ – sweet-scented noodles with crunchy pig skin, soya sprouts, and fresh lettuce leaves dipped in a fragrant mixture of exotic spices and herbs.
While wandering through the labyrinths of streets and lanes in the shadow of old oak-like trees with numerous pagodas and ancient Chinese temples hidden underneath, I suddenly come out to a charming river quay with an old wooden Japanese bridge, one of the main tourist attractions in Hoi An. Despite the early morning hour, it is already covered in dense smoke from censers and perfume sticks.
On the way back to the shuttle bus station, I observe numerous art galleries, tailors and shoe shops already open, tempting the passersby with 1,001 designs. Hoi An artisans and tailors have gained reverberating fame for sophisticated designs of clothes and shoes made by hand, and for the surprising speed with which the items ordered are made.
In spite of endless stops for chatting with locals and contemplating old architecture sites on the way to bus station, I still manage to catch a shuttle bus, which drives me 10 km to the Sandy Beach Resort. An elderly maÃ®tredâ€™hÃ´tel welcomes me with arms wide open at the resort entrance and guides my sleepy persona to the spacious lobby, all lit with early morning rosy sun, where I get learn the oh-so-refreshing news that check-in time will be at 2 p.m. Pensive and restless, I begin to explore.
Within two minutesâ€™ walk from the resort lobby with its elegant-looking white and black pictures of the old port city, one comes out on a shady veranda of Alamanda restaurant where riotous tropical vegetation comes up to touch visitors nestled in rattan chairs with long fingers of its hands-branches. The huge verdant garden here has been nurtured and cherished for the last 25 years, as the butler proudly assures me. The right side of the terrace looks out to the swimming pool and further behind the voile of greenery and emerald grove of slimâ€“bodied casuarina trees growing right from the sands, where the huge spaces of the ocean uninterrupted can be contemplated.
The Sandy Beach Resort area turned out to be huge, with an impressive 17 ha of prime location by the sea, fully occupied by lush gardens with all kinds of four-star standard accommodations. The very first line from the beach is given to exquisite oceanview villas offering first-tier panoramas of the East Sea.They are followed by bungalows nestled in the cool shadow of the garden, with huge private terraces to meditate on hibiscuses and blooming frangipani within reach of oneâ€™s hand.
But to get back to the first morning of my stay in the resort, with first step out on the beach barely made, I realized that my early morning walk in Hoi An, full of new impressions, was only an intro and the main part would start in a minute. On both my left and right lay an endless sandy beach yet unconquered and glittering in the sun. On the left, 15 km away but surely within walking distance, I could see Danang, a big sea port built on the land of centuries-old cultural traditions, where numerous historical sites can be visited and explored. Among them isthe unique museum of Cham culture with the worldâ€™s biggest collection of sculpture.
The marble mountains, with several centuries of stone cuttersâ€™ villages at its foot and pagodas scattered along their slopes, towered from behind the resort. Three of the pagodas there are hidden deep in the caves and could be reached only by crawling through stone labyrinths and climbing up the cliffs.

Then, further on the right, at end of the beach line, the giant snowy-white statue of Avalokiteshvara crowning the Danang Bay could be contemplated. With her impressive silhouette, she seems to have just stepped out of her royal chambers in Linh Ung pagoda behind her back to look over her temporalities and to contemplate the endless ocean rolling along below.

A day turned into three days for me. I managed to feel the ancient and the truly Asian under my skin in Hoi An at dawn, to walk more than 10 km on tidy sand along the seashore and to see mystic dances of Asparas and holy faces of Hindu gods and goddesses frozen in stone at Cham museum. I still had the good half of afternoon left when I jumped on the passing local bus full of travelling red-teethed babushkas in striped head cloths with shoulder-yokes at their feet, chatting with each other with maximum volume. I even managed to wrangle a â€˜first classâ€™ seat right on the knees of one of them. The late afternoon was fully given to Marble Mountains and their caves.
Sitting in the long chair in the resort garden during a short break after pedaling kilometers to Linh Ung Pagoda in wait for a tour to Ba Na hill station and My Son site and Hoi Anâ€™s famous Cua Dai, I felt somehow like an ancient pilgrim en route to a distant promised land.