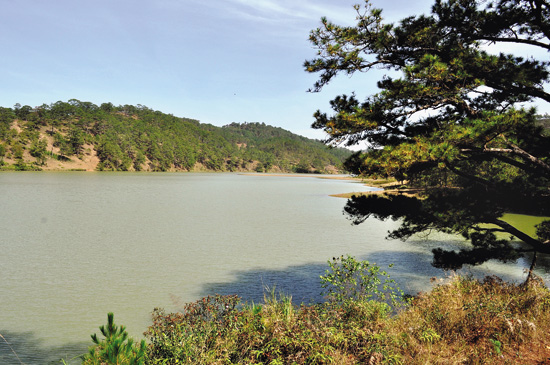 Vietnam Heritage, July-August 2011 — There is a hydropower plant more than half a century old at Suoi Vang, in Lat Commune, Lac Duong District, Lam Dong Province, in the Central Highlands.
If you go there in the rainy season (usually from July to December), it is advisable to go in the morning, according to the locals, because of the weather.
While the station is not open to the public, the bords of Suoi Vang, the reservoir for the station,  are a spacious and pleasant place to walk.

Suoi Vang (litterally ‘golden spring’) is about 20 km from the centre of Dalat.
You can hire a motorcycle for VND70,000 ($3.50) a day and pay about VND30,000 ($1.50) for the petrol. Hiring a taxi or car with driver could cost VND500,000 ($25).
From the Dalat city centre, I rode along Phan Dinh Phung Street past Domain de Marie Convent and turned left at Tung Lam Y-junction. From there, it was straight on to Suoi Vang.
I was alone along a quiet road among pine woods. I felt a little loneliness and fear, alleviated when I saw a motorcycle, car or herd of cattle.
I came to a brown, stone sign inscribed with ‘Ankroet Hydropower Plant’.
The greyish-tiled dam wall was a few moments beyond.
According to engineering documents, the reservoir side of the 20-metre high wall is exceptionally steep.
The 3 km road down to the generation station was narrow and steep in some parts, with sharp bends. Forest blocked out a lot of light. I used low gear and braked continually.
In a green valley full of sunlight was a building with a tiled roof.
Under the floor, water came through a control gate in a small waterfall.
I had special permission. I walked over a bridge and came to the words ‘Ankroet 1945’. One of three machines was working, silently.
A 30-cm-by-40-cm stone inscribed in French, Vietnamese, Chinese and Khmer warned of the danger of electric shock.
Near the sign was an old, disused Japanese turbine.
According to engineering documents the first two turbines were made by Bell, a United States company, and they were installed by the French contractor Société Française d’ Entreprises de Dragaes et de Travaux Publics with a capacity of 300 kW.
These were replaced by Japanese turbines in 1960 to increase capacity to 3,100 kW and supply electricity for the construction of Da Nhim Hydropower Plant.
Most recently, in 2006, the Ankroet plant was improved and one more turbine installed to bring total production to 44,000 kW, a tenfold increase.
The Vietnam Book of Records says Ankroet is Vietnam’s first hydropower plant, but the plant’s own documents say that in 1929 the O’Neill Farm, a dairy, built a hydropower plant at Cam Ly Spring, with a dam 15 metres high and 44-65 m thick and two turbines together producing 2,300 kW. It was destroyed during a flood in 1932. The tourist website of Lao Cai Province, in northwestern Vietnam, mentions Cat Cat Hydropower Plant, in Sapa, constructed in either 1923 or 1943. It is still supplying electricity for household use in the town. In Cao Bang Province, near Lao Cai, a small hydropower plant was built before 1940 at Ta Sa-Na Ngan, for a tin mine.
Another shock at the Ankroket Power Station is the amazing number of workers who died in the construction of the reservoir and station, several thousands, according to a former direction of the station, Mr Cuong.