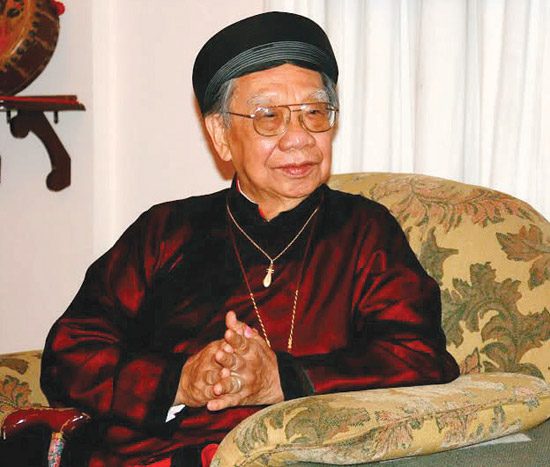 Professor Tran Van Khe, a leading expert on Vietnamese traditional music, shares his personal experiences with antenatal (prenatal) learning:
According to the recount of my mother and maternal Uncle Nam, when my mother was pregnant with me, no one in the country had yet thought of antenatal education.  My mother was living in my grandfather’s house in Giua Market behind a slaughterhouse. Each night at 3 a.m., my mother would be startled awake by the squealing of swine and it would be hard for her to get back to sleep. When she told my Uncle Nam about it, Uncle Nam went to see my grandfather and said, ‘Sir, I’m sure you, too, know that, as recorded in historical books, there are stories told about how, in ancient times, the mother of the master Mencius moved homes several times so that her son would always be close to places of positive influence. My sister is startled awake each night by squealing swine, which is deleterious to her health and has an insalubrious impact on her prenatal child.  I beseech you to allow me to take my sister to my family’s quiet garden for the duration of her pregnancy.’
My grandfather was also aware of the story of Mencius’s mother, so he agreed.
Uncle Nam’s house was located in a spacious garden. He built a commodious outer wing close to the wall of the house with a bed for my mother and a crib for the baby. It had a place to read books and another for viewing the scenery. My uncle planted two kinds of flowers – marigold and henna – that were meant to wish that the baby, once born, would live a full life and know how to play musical instruments well. Uncle Nam was fond of cockfighting, but he cleared away all of his chicken coops and no longer held cockfights at the house as he did in the past. My maternal uncle picked out books of an educational quality for my mother to read, like The Essentials of Ancient Learning (Co hoc tinh hoa), The Analects of Confucius (Luan ngu), Twenty-four Paragons of Filial Piety (Shi’ersi xiao by Guo Jujing), and An Ode to Learning for the Family (Gia huan ca by Nguyen Trai). Every day after waking from his midday nap, Uncle Nam brought over his flute and played traditional Southern amateur music (don ca tai tu) for my mother to listen to. Now and again, my maternal uncle would say to the prenatal child, ‘Little one, your granduncle Nam shall play you the lý (Central-Southern style) song ‘Four Seasons.’ My mother often said to my maternal aunt that although my maternal aunt no longer worked in a maternity hospital  once she got a husband and  now only occasionally assisted in childbirth, everyone still said that she had quite a knack for midwifing, and the babies she helped bring forth were always strong and healthy. My Aunt Nam was also attentive to my development.  Whenever my mother said that the baby was kicking from within the womb, my maternal aunt would come caress my mother’s stomach and say to me, ‘Child, don’t kick too hard and hurt your mother.’ My maternal aunt also advised my mother that she should caress her belly while speaking to the antenatal child. My maternal uncle occasionally recited Tang Chinese poetry for my mother to hear. My mother memorized the more interesting poems and often recited them herself. My maternal uncle did not allow my mother to see hát b?i (traditional theatre) performances because of their masks’ variegated features, but Uncle Nam did hang up a picture of the Four Dainty Female Performers (T? n?). Whatever my mother craved, my uncle immediately gave to her so that she could eat it.
All throughout the nine months, the whole family played songs, sang, and recited poetry for me to hear. Each day, my mother went for a walk in the garden to see the blossoming marigold and henna flowers. Neighbours frequently came to visit my mother and chatted with her. Never did my mother hear arguing, yelling, or the stridence of anger.
When the day came on which my mother was in labour, Aunt Nam was always by my mother’s bedside to talk with her and ease her pangs. The moment I emerged from the womb, Aunt Nam ebulliently cried out in a truly sonorous voice, ‘[You’ve] given birth to a son!  They’ll be someone to carry on the Tran family line!’ Uncle Nam immediately ran over, played his flute, and welcomed the baby.
When I heard this story, I thought that I was very fortunate in that my whole family practised antenatal education, despite not having read any books about the subject – and yet managed to do things quite consonant with modern antenatal education methods.