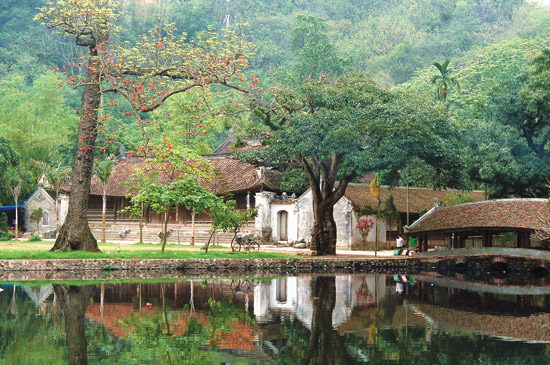 Buddhist in the front, Holy in the rear

Standing modestly at the foot of an arc-shaped lime mount which rises from a plain in Sai Son Commune, Thay Pagoda belongs to Da Phuc and Thuy Khue Communes, Quoc Oai District, Hanoi. It is also called Thien Phuc (Heaven’s Blessing), and this name fits the beautiful pagoda and its serene atmosphere. The old ones relate that when the monk Tu Dao Hanh came here to establish the pagoda, he saw a lake beside the mount. A big promontory jutted out, looking to him like a dragon coming down for a drink of water. The pagoda founders widened the ‘dragon’s’ back and built the pagoda on it. The pagoda is at the centre of a densely populated and thriving area; thus this Zen site always has worshippers and caretakers. Located near Day River, a major highway, Thay Pagoda, together with Long Dau, Hoa Phat, Kim Hoang and Boi Am Pagodas, form an integrated spiritual conglomerate.
The pagoda follows the ‘Buddhist front, Holy rear’ architecture, which is dominant in Vietnamese Buddhism. In the Red River Delta, there are 15 pagodas built in this style, but only five of them are truly Buddhist front, Holy rear, which means they have a separate structure for the worshipping of saints. Those five are Thay pagoda, Keo pagoda (Thai Binh and Nam Dinh), Boi Khe pagoda and Tong pagoda (Hanoi). But Thay pagoda has some other unique features.
Long ago, it was a hermitage for Tu Dao Hanh, a famous monk of Vietnamese Zen Buddhism during the Ly Dynasty. According to the official records, after Dao Hanh left his body in 1117, Lady Do* gave birth to a son. Thinking that it was a holy sign, the villagers put his body in a hollow altar. In Thay pagoda, one can still see two stone lotus-shaped pedestals, one supporting Tu Dao Hanh’s statue. There is no carving to show the time of their making, but aestheticians say that the style, form and decorations belong to the Ly-Tran era. Notably, these pedestals, typically made for Buddha’s statues, are not placed in the upper edifice, but in the Holy area. This fact proves that this was a centre of Buddhism of the Ly-Tran era, at the birth of the Buddhist front, Holy rear accent.

The pagoda has retained seven stone steles, all dating to the 17th century. One of them, the ‘Acknowledgement’, made in the 7th year of Duong Duc’s reign, described the construction of the Holy Edifice, and listed the names of contributors. From this date and the architectural features, we can imagine that the pagoda, built in the Tran Dynasty (1225-1400), acquired this ‘hybrid’ feature during the major renovations of the 17th century. It was at that time that the structures dedicated to Buddha and the Saint (Tu Dao Hanh) were separated, giving birth to the Buddhist front, Holy rear architecture.
In the context of rapid economic development in the 17th century, the autonomy of villages grew stronger. It was an era when Vietnamese culture reaffirmed its independence from foreign influence. People paid special attention to national saints, who played vital roles in the life of the country and the people. When placed in the pagodas, they are worshipped not only behind the Buddha, like in most other pagodas, but also as the forefather of certain professions in a large region. For example, Duong Khong Lo is considered as the forefather of bronze casting, fishing and irrigation. As for Tu Dao Hanh, he was not only a celebrated Zen priest, but also the forefather of the water puppet show. Therefore, saint worship is sometimes more practical than Buddha worship. In Thay pagoda, the interior design and the architecture of the Saint edifice are more sophisticated. The thuribles and altars are more ancient and beautifully made.

The sanctuary at Thay Pagoda

The statues at Thay Pagoda

Moreover, the pagoda has three statues of Tu Dao Hanh. One is in the Forefather compartment, one is in the main altar, and one is in a sacred box in the Saint’s Edifice. The one in the sacred box, made after his appearance in the religious meditation incarnation is the most notable. It’s said that it has knuckles, connected to control strings, so when the box is opened, the statue can stand up and greet visitors. The box is opened only once a year, during the local festival. The statue was made in such a special way to honour the Saint as the Forefather of the art of water puppets. For the same reason, a stage was built in the middle of the lake in front of the pagoda to be used by the water puppet show puppeteers during the festivals. During non-festive times, only a side door of the pagoda is opened for pilgrims to come in and pay their respect to the Saint without having to pass the Buddha’s edifice. The Saint’s Edifice is also called the Upper Edifice, while the Buddha Edifice is called the Middle Edifice. This shows that here the Saint is esteemed more than Buddha.

The scenery and the legends surrounding the Saint Tu Dao Hanh, one of Vietnam’s Immortal Four, have given the Sai Son region a special spiritual value. Thay pagoda, a rare and beautiful architectural masterpiece, is a centre of Buddhism in the Red River Delta, a place for people to come to seek tranquillity of the soul.

Text by Trieu Thanh Tu and photos by Ba Ngoc