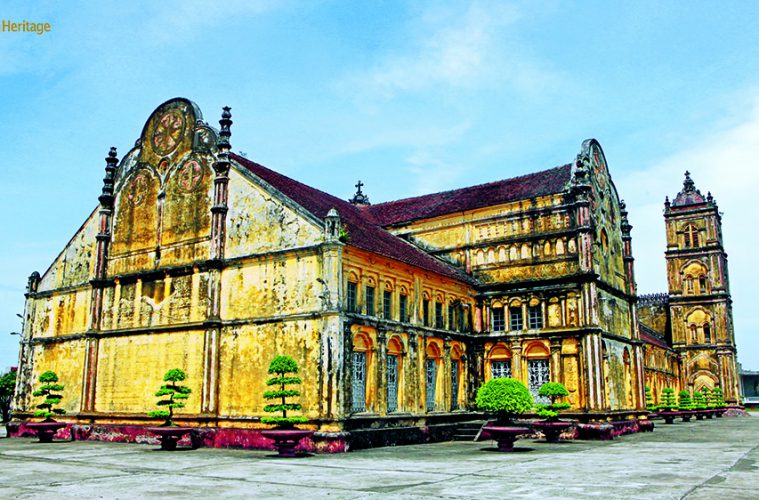 Text and Photos by Le Bich

The construction of the cathedral began in 1884
under the Spanish Bishop Wenceslao Oñate Thuan. A year later, it was
inaugurated. The 78m long, 22m wide and 15m high structure with 35m high towers
was built in the Baroque style, rare among early churches of Vietnam. Since
then, the cathedral was renovated in 1974 and 2000. After over 100 years, the
cathedral with European architectural features and decorative patterns stands
firm on ironwood pillars. The basilica is the resting place of the 7 bishops
who headed the diocese (Bishop Wenceslao Oñate Thu?n, Bishop Pedro Muñagorri
Trung, Bishop Dominic H? Ng?c C?n, Bishop Joseph Ph?m N?ng T?nh, Bishop Dominic
Lê H?u Cung, Bishop Joseph V? Duy Nh?t and Bishop Joseph Hoàng V?n Ti?m.)

Bui Chu Cathedral stands out by its loess color.
Standing on intricately carved stone pedestals, shiny black ironwood pillars
support typically Baroque (meaning precious stones in Portuguese) oval cupolas,
which reminds one of the old triple gate architectural style of the Orient.
Notably, the cupolas of the cathedral were built with a mixture of thatch and
lime, light and cheap but durable.

The cathedral of Bui
Chu belongs to the complex of edifices of the Bui Chu Episcopate. Every year
people from far and wide flock to the cathedral to contemplate the unique
architectural features and to learn about the history of the Bui Chu Parish.
Bui Chu is socially significant because it was the very first officially
recognized diocese of Vietnam (in 1553). Bui Chu Cathedral is an architectural
and cultural heritage and a unique work of art painstakingly built by our
forefathers

From Hanoi, follow the 1A National Highway to Nam
Dinh Province, then turn to the road to the famous Co Le Pagoda to reach Xuan
Truong District. You are almost there. Ask the locals for rest of the way.

I am taking the liberty of writing to you despite
being neither Vietnamese nor Catholic.  I
am from Uruguay, a small country half the way around the globe.  But for many years I lived in Hanoi and I
truly love Vietnam and its people.  Also,
like many Uruguayans I am an Atheist. But I sincerely believe that religious
faith, of all sorts, has given us the strong values and the deep sensitivity
that connect us all as human beings.

Today I am writing to you in the name of those
strong values and deep sensitivity.  And
I am writing to you with a plea, as I believe that you are the only people who
can avoid a sad outcome for Vietnam, for the Catholic Church, and for the
entire world.

The magnificent Bùi Chu cathedral, under your
jurisdiction, is scheduled to be torn down in barely two weeks.  The destruction of such an extraordinary
building comes after the demolition of Trà C? church, in March 2017, and the
loss of Trung Lao church to a big fire, in August of the same year.  Other churches under your jurisdiction,
including the H? Phêrô church, are also scheduled for demolition.

I very well understand the reasons to replace these
old buildings.  Renovating them would be
very expensive.  Given their old age and
bad state of disrepair, there is a risk that beams or plaster could fall from
the ceiling and hurt, even kill, innocent villagers attending mass.  The government is not providing resources to
take proper care of these decaying structures and there is no available land
nearby to erect new ones.  Besides, few
of these churches is in the Heritage List of Vietnam, and therefore the
Catholic Church is legally entitled to get rid of them.

All of this is absolutely true, but I am afraid that
history will not be kind with this decision.
Vietnam is not a rich country yet, and understandably its people put
convenience before heritage.  Nobody can
criticize them for that.  But I have no
doubt that Vietnam will prosper.  New
generations will travel abroad, enjoy European cities, be exposed to global
ideas…  And sooner or later they will
look back, remember the beautiful country they grew up in, and ask who was
responsible for the loss of its character.
Invoking the same strong values and the deep sensitivity the Catholic
Church incarnates, they may question the decisions of their forebearers, with
sadness.

Even today, in the aftermath of the tragic fire at
the Notre Dame cathedral in Paris, the demolition of Bùi Chu cathedral could be
met with disbelief, even anger. For many hours, the entire world watched the
French people agonize over the possible loss of a beloved monument, a witness
of their country’s history and a magnificent piece of architecture. The fire at
Notre Dame was a tragedy, but the popular reaction to it was deeply moving.  And the emotion voiced around the world was
reassuring about our collective attachment to cultural heritage, regardless of
religious faith.

I am afraid that the demolition of Bùi Chu cathedral
will also be watched by the world with anguish.
Except that this time the loss will not be a tragic accident, but rather
a deliberate act of destruction.  The
Vietnamese people still remember with anger the demolition of the One-pillar
Pagoda by insensitive colonizers.  It
would be sad if the Catholic Church of Vietnam was remembered that way by
future generations, in relation to the magnificent churches of the country’s
north.

There is an alternative, however.  A very good one.  And through this letter I would like to
respectfully ask you to consider it.

Maybe none of the Catholic Churches of north
Vietnam, on their own, qualify as world heritage.  But together, they are an ensemble that is
truly unique, on a global scale.  These
beautiful buildings combine French architecture from the Beaux Arts period with
clearly Vietnamese touches, including wooden pillars and stucco decorations
reminiscent of traditional pagodas. These churches could be part of a very
successful tourist circuit, bringing jobs and income to the local populations,
as well as the resources needed for their maintenance and renovation.

Even more important, Vietnam is successfully
emerging from a long history of conflict.
Invasion by a powerful neighbor, colonization by a foreign power, war on
an unprecedent scale and, worst of all, tension between Vietnamese people with
different beliefs…  The Catholic Church
can play an important role in healing these wounds.  Christians are a minority in Vietnam, but
they could be seen as leaders in protecting the cultural heritage of the
country. In doing so, they would earn sympathy and support from people of all
faiths.

Just ten days ago the government of Vietnam made a
very important gesture towards the Catholic Church. During the Holy Week the
authorities of Ho Cho Minh City notified the Archbishop of South Vietnam that
the Th? Thiêm church would be saved from demolition and preserved as a
historical and cultural relic.  There was
applause in the church when the news was announced, at the end of the mass.

The Vietnamese government was enlightened in its
decision, and we all feel grateful for it.
My respectful question to you, dear Fathers, is whether the Catholic
Church of Vietnam wants to be on the side of demolition after such an
encouraging gesture from the authorities. Saving Bùi Chu cathedral would send a
powerful encouragement to the of custodians of Catholic buildings in other
provinces.

I am not Vietnamese,
I am not a Catholic, but I want to offer my full support to you if you decide
to protect the magnificent heritage under your purview.  I am determined to spend time in Vietnam and
to devote my energy to sustainable urban development in Hanoi and its
surroundings.  If you agree, will be
delighted to work with you, with the priests and with the local populations, to
make the old French churches of the north shine as a treasure of Vietnam.