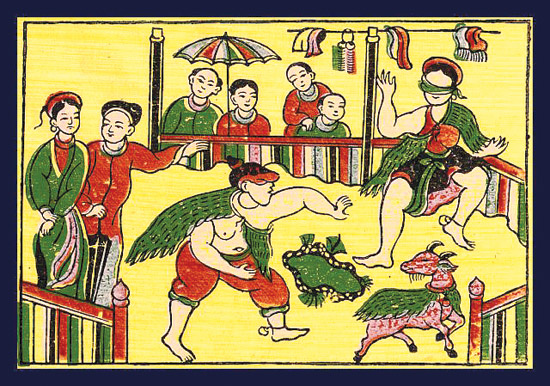 A Dong Ho painting
depicting the game of ‘Catching a goat while blindfolded’
Photo: Internet

Vietnamese proverbs for the year of the goat

*‘Old goat pretending young deer’ (Dê già l?i gi? nai), meaning this is to unmask a perverted and tricky person who pretends to be naïve.
*‘Beat it like a sacrificial goat’ (?ánh nh? ?ánh dê t? ??n), meaning to beat incessantly, without mercy, to make the victim cry as loud and as much as possible. (In big celebrations, people used to sacrifice three animals, including buffalo, pig and goat. Before killing the goat, they would beat it, believing that the crying and sweating would remove the bad odour from the meat.)
*‘Rich at the horse hour, poor at the goat hour’ (Giàu gi? ng?, khó gi? mùi), meaning life can change quickly.
*‘The rich grow dogs, the poor grow goats, and the jobless grow geese’ (Giàu nuôi chó, khó nuôi dê, không ngh? nuôi ng?ng), meaning one should choose to do what is suitable to oneself and conditions.
*‘Being a dog or a goat’ (Làm thân dê chó), meaning one has to fawn and serve somebody else.
*‘Ploughing with a goat for not having a buffalo’ (Không có trâu b?t dê ?i ??m), meaning to use a person or tool not suitable for a job or without a suitable tool, one has to improvise something makeshift.
*‘Goat or cow alike’ (Máu bò c?ng nh? ti?t dê), meaning two irrelevant, unrelated (both in form and content) things or issues.
*‘Fixing the barn after the goats are gone’ (M?t dê r?i m?i s?a chu?ng), meaning to do things when it is too late.
* ‘Hanging goat to sell dog’ (Treo ??u dê bán th?t chó), meaning words and actions don’t match, like a restaurant that hangs a goat head as a sign but that sells dog meat instead.