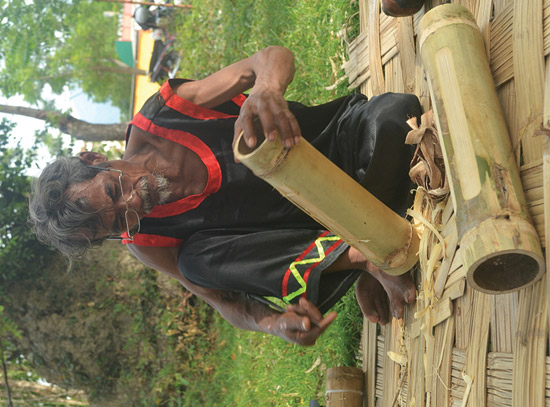 Like other ethnicities in the highland, the Raglai retain a rich folk heritage, which includesthe playing of the ma la (which produces a gong-like sound), the sarakel flute, epic songs, a tomb-moving ceremony and a new rice festival. But at the centre of it all is the humble chapi.
Perhaps whoever comes to visit the Raglai would ask to see the chapi, because it gave composer Tran Tien the inspiration to write ‘Chapi Dream’ with its simple and sincere (but still tormenting) words: ‘Up there, they live a peaceful life/ Even the poorest has a chapi/ When the strings touched, the tune fills the Raglai hearts…’ The chapi is made of a section of an old bamboo, normally about 30-35 centimetres in length, eight centimetres in diameter. It’s an instrument unique to the Raglai, but very popular among them. It is their life’s company deep in the mountains.
Chamale Au from Ma Noi Commune, Ninh Son District, Ninh Thuan Province, is among the top chapi makers and players. Early in the morning, when the jungle roosters are just clearing their throats, Chamale Au has already brought old bamboo sections to the Raglai Ethnic Cultural Festival in Ninh Thuan. He told us that the bamboo has to be very old, with a thin and shiny cortex, and it has to grow on hilltops. Those that grow below absorb too much water, which makes the sound hoarse. With the tip of a knife, he prises the outer layer to make 12 thin strings. He then inserts bamboo bridges to separate them evenly from the tube. Behind the bridge, each pair of strings is fixed together by a coin-like piece of bamboo. Two ends of the tube are bound with rattan to hold the strings tightly. After that, the joints at two ends are pierced through to let the tune out. The musician holds the chapi at an angle, the upper end pointing outward, the lower end leaning on his belly, to improve the resonance and to make the sound warmer.
The chapi tunes, low and high, carry the Raglai love to the forests and mountains and give them a human soul. It takes the craftsmanship and passion of the maker and the innermost vibration of the player’s heart to the heights and depths of the void.
For the whole duration of the fair, Chamale Au sits quietly in a corner, caressing his chapis. Oblivious to the noise and rush around him, his fingers softly gauge every sound, his ears feel every nuance. The chapis are tuned to the sounds of the ma la. So, like the ma la, chapi sounds correspond to the members of a family. The sounds of parent string pair, son string pair and daughter string pair combine together into a delicate chapi tune.
The Raglai consider the chapi a reduced ma la, which can be played by just one person and is easy to carry. To them, ma la is the most important instrument, which plays a role in all community activities. But not every household can afford a set of ma la. Each set used to be traded for two buffalos, which was a huge fortune in Raglai life.
So one can say that ma la is the instrument of the rich, and chapi is for the poor. Nowadays, chapi has become a popular instrument among the tribes living on the tail of Truong Son in the South of Mid-Vietnam.

Chapi has long been the song of the Raglai’s heart. At one time, every family had one, and everybody could play it. They played it in the fields, in the forests, under the sun and in moonlight. The chapi tunes made them happy to feel the breezes between heaven and earth, relieved their pain and hardship and helped them stand firm in life. Now, in the time of TV’s and mobile phones, young people are disconnected from the chapi. Nowadays, chapi tunes can often only be heard in cultural shows performed by old folk artists. In a recent seminar on conservation and development of Raglai culture in Bac Ai District (Ninh Thuan Province), folklore administrators and researchers have proposed some solutions. They also expressed worries that chapi makers have no followers.
Currently, Raglais in Ninh Thuan Province, mostly the old people, are still making and playing chapis. But in Khanh Hoa Province they can be finger-counted.
Facing the threat of chapi disappearance, the authorities and some Raglai from Khanh Hoa and Ninh Thuan provinces have proposed ways to revive and conserve it. Composer Ho Hoai Son, a devoted chapi lover, shared his thoughts, ‘We always considered chapi as a Raglai musical instrument, and forgot that it was a symbol of a culture. Now is the time to commercialize it, to make chapi not only a show toy, but also a live cultural product, a souvenir for tourists.’
Recently, Khanh Hoa Province made efforts to conserve and develop ethnic cultures of its minorities. The project is currently at phase 1 (2012 – 2015): inventory of ethnic cultural values, including the chapi of the Raglais. The task of phase 2 (2016-2020) will be to make use of the heritage to build and further develop ethnic cultures and promote them, while at the same time combining cultural conservation with tourism development in certain regions. Only that way, the chapi tunes will truly be the music of the forests and mountains which can resonate in domestic and foreign visitors’ hearts.