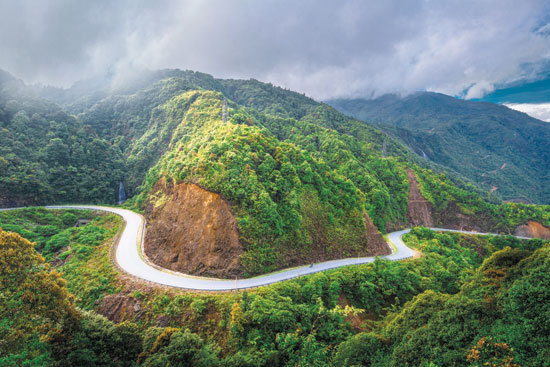 It is a marvel what the French and the Vietnamese made of a sandbank for that is the translation of the word Sapa. With a high density of hotels and restaurants, long ambling lanes and a pretty artificial lake Sapa has a great deal of charm. Intended as a hill station to escape the sweltering lowlands and the din and pollution of the cities, Sapa still serves that purpose. However there is little point in coming here if you have Sapa town as a destination. Better to use it as a base to explore the amazing forest and rice terrace scenery and the huge bio and ethno diversity of these mountains considered to be the eastern extremity of the Himalaya Range.
After a six hour coach journey from Hanoi on the new freeway and then thirty five kilometres of twisting mountain road affording great views of the cascading rice terraces we stopped just outside my hotel greeted by smiling young Hmong women most with a baby on their backs (Some of these bairns must be â€˜rentedâ€™, I thought, they could not all be mothers).

The author and his guide, Mrs Ke. Photo provided by Pip De Rouvray

After checking into my luxury room with full mountain view and a quick wash and brush up I found myself seated on the terrace of the elegant U Sapa Hotel with its fine French facade overlooking he famous love market square. With me were Mr Phil Hoolihan and his wife Hoa of Ethos Adventure Day Tours, the general manager of U Sapa, M Stephan Chaline, and three young Black Hmong ladies resplendent in their traditional attire. We talked about the current situation of tourism in Sapa and how much the local ethnic groupings benefit from it. Phil then asks a very interesting question of one of the young women who has just had a baby daughter: â€˜Will you teach your daughter how to make traditional clothing?â€™ The answer is a definite, â€˜Yesâ€™. Phil and Hoa strive to help maintain ethnic minority traditions and to ensure the indigenous people get a fair deal out of tourism. They even have two Hmong girls semi adopted and living with them.

With ‘Ethos Tours’ you are free to involve yourself as much as you like in the planning of your trip. The basic outing on my first full day was a walk, then to visit the guideâ€™s house and have lunch with the family. My particular cultural wish was to hear the â€˜Khenâ€™ played. This is a six holed flute like instrument with bamboo tubes protruding laterally from a central one of cedar wood. I also requested trying out the local alcoholic beverage.
We were headed for the village of Sau Chua, the highest in Vietnam at around 1,800 metres (5,900 feet) above sea level. My guide was Miss Ke. The Hmong are often after named after objects which are important in their daily lives and Ke means â€˜basketâ€™. Accompanying us was Mi, a fourteen year old trainee guide.
The village does look far from town but it was a circuitous road that took us on a forty minute taxi drive to our dropping off point. We stopped at a viewing point on the way with a huge rock with a pool behind it and in front a sheer drop of several hundred metres. Ke pointed out a lone tree down in the valley. â€˜Thatâ€™, she said, â€˜is the spirit treeâ€™. We Hmong cleared the forest for habitation and farming. We left that tree to guard the spirit of the forest. Anyone who harms the tree will fall illâ€™.
Soon we were out of the car and our walk began. It is curious what similarities there are between mountain folk worldwide. There was dry walling just as I have seen in Wales. The Hmong I saw store their maize kernels in little wooden granaries raised from the ground by pillars to keep out rodents and with slits in the walls for ventilation. This I have seen in Spain and Portugal. Some of the crops though that I saw were new to me. Ke showed me hemp and indigo. Ke’s English was really good. She had learned a lot of quite technical words and explained in detail how her people made their clothes from hemp and how they obtained and used the indigo dye to colour them.
There was one very pleasant surprise on this walk. Mi pulled foliage out of a bush. Within half a minute she had fashioned and presented to me a little horse. Green Hmong origami! â€˜All H’Mong children do thisâ€™, Mi explained.

Below: On the village road, Sapa. Photo: Tran Binh An

We reached a couple of small buildings. Clambering up a slope we found ourselves at Ke’s house – a one storey wooden building with a small outside loo and a sty with six pigs. There was a hen whose chicks were constantly being shooed out of the house, There was air was smokey as the indoor cooking was over a wood fire. Ke introduced me to her husband and to a cousin. The cousin’s wife wearing the black hat that gives the name to the Black Hmong. She was taking care of a baby while a two-year-old boy scampered about providing amusement.
We three men ate separately. They did not speak English and I soon found myself learning Hmong phrases for â€˜This is goodâ€™, â€˜To your health and let’s drinkâ€™. The meal of pork, rice and water spinach was accompanied by copious glasses of home made rice wine. Just as with the Kinh majority there was a lot of toasting. However my companions were notably less boisterous than lowlanders.
As we were eating Ke sat down by me and told me of the Hmong way of life. She told me of her father who is a shaman who cures illnesses by driving out evil spirits. Her mother is a herbalist and uses the forest as a pharmacy. She spoke also of Hmong marriage which can be arranged, love, or by kidnapping. The later she explained had strict rules with the girl being held for no longer than three days and having the right to refuse marriage. Phil told me later that this custom can range from having the collusion of the girl to considerable coercion.
Then at the height of the merriment a Khen musical instrument was produced and the cousin treated me to a performance. I am not a musician but I had a go and was able to produce, with a little instruction, some fairly pleasant sounds. Finally the cousin donned traditional clothing and we all went outside where the cousin played more performing an extraordinary dance. He gyrated and swirled quite close to the ground. I could not see a meaning but perhaps he was imitating the mating dance of some exotic bird.
I hope I have whetted your appetite for some Sapa adventure. I had only had a mere taste of it. Two days in Sapa should be the absolute minimum stay. A week or more is needed. This is an area to savour and not just tick off a list. The rice terraces are amazing but it is the gentle peoples who work them that is the biggest draw. They lead difficult lives but not the often agitated life of a city dweller like me who needs the occasional escape. â€˜Go Sapaâ€™ is my advice to you and I hope you find yourself in as welcoming, knowledgeable ,and culturally sensitive hands as I experienced with the U Sapa Hotel – Ethos Tour Company partnership.