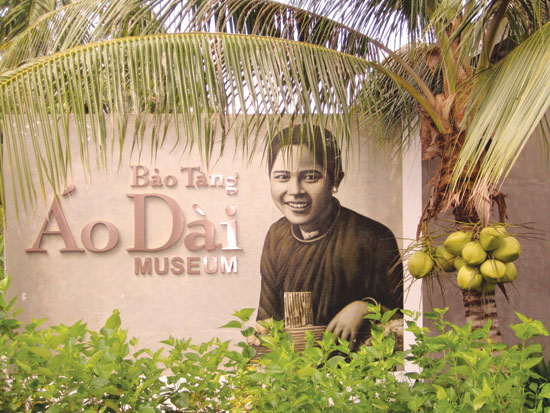 Covering everything, hiding nothing

There can be few things more pleasing to the eye than a fine lady in a fine dress. In Vietnam, ‘fine dress’ means the long, two-piece dress known as the ao dai, which is, of course, a national symbol. It consists of a flowing, tight-fitting tunic over loose pantaloons and is one of only a few Vietnamese words that one may find in an English dictionary. Many museums feature costumes, but few are dedicated to one form in particular. Since 2013, Vietnam has had a museum to display the dress and to inform people of its history and diversity of styles and patterns. In fact, as I was to discover, it does that to great effect and delivers a lot more besides.
The museum is located on a large island in the Dong Nai River way out in District 9. Whilst it is technically in Ho Chi Minh City, it is located in mangrove swamp countryside of probable interest to bird watchers as I heard a lot of different bird songs.
It may look remote on the map, but it could not be easier to reach. Of course, many would simply hire a taxi. However, there are frequent number eighty-eight buses departing from Ben Thanh Market, which get you there in comfort and in just over an hour. The ticket is just 6,000 dongs one way. It is a jolly jaunt over the not-so-densely populated districts two and nine. Shortly after the connecting bridge, you will see a sign for the museum. Alight here and walk three hundred metres down a wide dirt track and you have arrived. This short walk shows you just how swampy the area is, especially in the uncultivated areas.
A visit to the museum will probably take half a day. If you wished to make it a full-day excursion, there is a recreational area nearby with gardens, a beautiful swimming pool and a restaurant. River boat trips can also be arranged here. Bring your binoculars.
The museum itself is housed in two parts. First, there is a section devoted to the history and evolution of the garment from the seventeenth century until the present. This is in a traditional beam-and-rafter long house. Separately, in a two-storey atmospheric wooden building, there is a display of contemporary ao dais donated by well-known people.
But first to catch your eye will be the gardens. There is a central lake with a pavilion, where tea is often served from the nearby café, which also has other light refreshments on its menu. Over what appears to be an ancient bridge, you reach a small pagoda. Down a slope there is a muddy creek, which is an inlet of the river. The lawns are given a rustic atmosphere with old wooden carriages and wagon wheels. Hidden away, there is a pond thick with lotuses and white swans gliding around. Even the functional water tower has been disguised as a turret that could be from the Hue citadel. The only other places I have seen such delightful landscaped gardens like these are in high-end resort hotels.
As you enter the longhouse hall, you see on other side displays of the common accessory to the ao dai – the equally iconic ‘non la’. Explanations are in Vietnamese and generally well-translated. Most of the exhibits have been worn by well-known people, and potted biographies of them, with the occasion on which they wore their dresses, are given. These show just how democratic a garment the ao dai is, running as it does across a spectrum of social class and occupation. There are models, singers, actresses, designers, artists and even a female army general.Two rather coarse and plain examples remind us too that even Buddhist nuns enjoy wearing the ao dai. Furthermore, whilst the dress maybe the epitome of feminine elegance, we are also shown exhibits of the male ao dai; indeed I own one myself which I wear at Tet Vietnam. The displays are very professionally arranged, often with pictures behind them of the historical era to which they belong and a lighting system that enhances the natural colours.
The two-storey building has no historical theme but rather has ‘ao dais’ donated by people living now. There are one or two donated by elderly ladies, but mostly they have been worn by glamorous beauties. I know it is all in the eye of the beholder, but looking at the photographs, I would not have put the runner-up to a Miss World competition in the top five – maybe it was her that won the day for her! Do have a walk along the top floor wooden corridor which has great views out across the whole compound.
Besides the museum itself there is a lot else that goes on at this place. There are great places for wedding photos and videos for example. With a conference room seating two hundred, it holds company retreats. There are guest houses for specialists. Meditation sessions can be arranged for spiritual health and relaxation as well as student camps and team-building activities.
My visit to the Ao Dai Museum was a great day out and a mini-escape from urban living. I learned a lot about the ao dai and enjoyed the stunning colours, designs and embellishments of many dresses. It was also a back-to-nature experience of a very South-East Asian kind. I can thoroughly recommend it to you. Place it high on your list of things to do while in Ho Chi Minh City. It is much more than just a museum!n