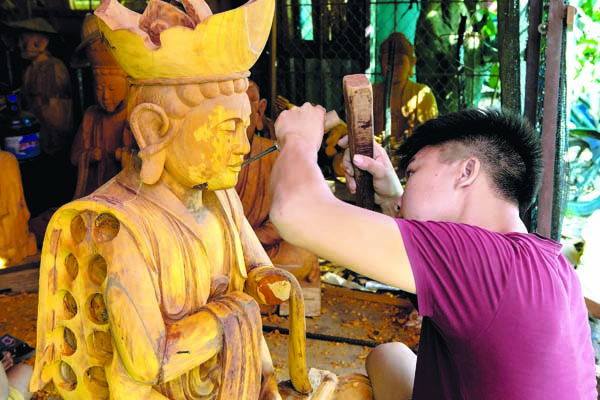 Dedicated to the wood

Carvers carry on their forefathers’ trade

The fine handicraft art trade village Son Dong, Hoai Duc District, Hanoi, is well known far beyond the Red River delta region. This over-a-millennium-old traditional trade village specializes in making wooden statues and sacred objects.
According to the village elders, the name Son Dong may be as old as its wood carving trade. None of the villagers knows how long the trade has existed. The Sacred Records kept in the Upper Shrine of the Ancestor of the trade at Son Dong commune, written in 976 BC during the Early Le Dynasty say the shrine is where the Divine Dao Truc is worshipped. He was the one who restored the trade and taught the people. When he died, the King ordered the Son Dong Village to build the shrine to worship him as the Ancestor of the trade that restored the glory of Son Dong Village.
The sounds of chisels can be heard far beyond the village boundaries. Some elders recalled that during the war, like any other trades elsewhere in the North, the carving trade declined significantly. But strangely, the ‘golden hands’ have never been lost along the way. Maybe the trade was silently passed down in the families. After peace was restored, the eldest villagers opened mass training sessions for the youth and so the wood carving trade of Son Dong has been restored and flourishes again.
Son Dong carving specializes in lacquered, gold and silver plated statues and sacred items to serve the people’s needs in spiritual activities. Son Dong statues follow strict rules of proportion that make them very life-like and special. Son Dong artisans can make any statue to order without being given a ready-made design.
Process wise, beside the common general procedure, each artisan of Son Dong has their own methods which may be quite distinct. The common material is jackfruit wood because it is soft, fine in fiber, not prone to crack, easy to whittle and highly durable. The wood is bought from the provinces of Phu Tho, Thai Nguyen, Thanh Hoa, Nghe An. The outer, softer layers of the logs are cut away, and only the core is left for carving. The carver uses a string to measure the volume and begins to cut a sketch from the top to the bottom, from the hat, head, face, down to the legs, block by block. After that comes the most important phase, in which the artisan carves the details in all parts of the statue.
Next the almost finished figure is whittled with a flat, thin chisel to make the fine details look clean and clear. Some scraping will make it even cleaner, especially in crevices and holes. Polishing with sandpaper finishes the form. Now comes the painting part, which is as sophisticated as in making lacquered paintings. Layers of different paints are applied on the statue in a specific sequence. As each layer is applied, the statue is whet with a whetstone and water. The whole process of paint application and whetting is repeated until the whole statue surface looks polished and sappy. A layer of gluing paint is applied. When it is almost dry, the artisan glues thin sheets of silver or gold as ordered.