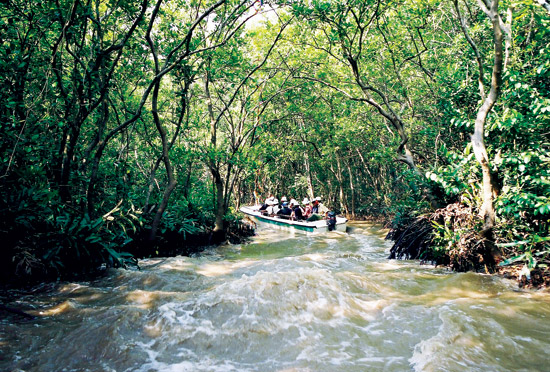 Can Gio District is about 60 kilometres south east of downtown Ho Chi Minh City. It is the cityâ€™s only seaside district and is also considered the cityâ€™s lung.
Its mangrove forest used to take up two-thirds of the districtâ€™s area of 714 square kilometers. That was 50 years ago, according to a tourist guidebook issued by the Peopleâ€™s Committee of the district.
Almost the whole forest was destroyed during the war. As peace returned in 1975, the cityâ€™s authorities launched several tree-planting campaigns. Now the fauna and flora of Can Gio have recovered and are nearly the same as they were, the book says. Can Gio was recognized by UNESCO as one of the worldâ€™s biosphere reserves in 2000.
Archaeologists have found broken pieces of ceramic and metal objects believed to date to 2,500-3,000 years ago.
At the moment, there are dozens of tourist attractions in Can Gio. From the cityâ€™s centre, tourists can go by car, boat or motorcycle.
I and my girlfriend rode a motorcycle to visit Can Gio. From District 1, we crossed Khanh Hoi Bridge and ran on to Nguyen Tat Thanh Street in District 4. At the end of Nguyen Tat Thanh St, we crossed Tan Thuan Bridge to go to District 7 and ran on to Huynh Tan Phat St and went for about 10 kilometres before arriving at Binh Khanh Ferry.
We paid VND5,500 ($0.26) for a ticket for two people and a motorcycle and got on a ferry full of people and motorcycles.
After 15 minutes, we were on the other bank of the river and there were a lot of mangrove trees on both sides of the road leading to Can Gio. The four-lane road was quiet and the air was much fresher than downtown.
Suddenly, the front tyre of my motorcycle went flat. We couldnâ€™t find a place to get it fixed, so we pushed it back toward Binh Khanh Ferry. We found a repair service after going for about 2 kilometres.
Back on track, we passed about 10 bridges over canals weaving around large forests. My girlfriend said, â€˜This road itself is an interesting tourist attraction.â€™

At Ly Nhon T-junction, 30 kilometres from the ferry station, we saw a sign which read â€˜Monkey Island Tourist Areaâ€™.
Going as the arrow pointed, we turned right and rode for 1 km on a two-lane asphalted road to the ticket counter. The tickets were VND35,000 ($1.67) each on Saturdays and Sundays and VND30,000 ($1.43) each on weekdays. â€˜The tickets are more expensive at weekends because there are animal circus performances at 9 a.m. and 3 p.m. on weekends,â€™ the ticket seller explained.
Leaving the ticket counter, we rode for another 100 metres to the centre of the Monkey Island Tourist Area. There was a coffee shop, a restaurant and a museum. The names of the objects in the museums are written in Vietnamese and English.
At the section where the old items were displayed, we saw different items like pots, earrings, axes made of ceramic, stone and metal. They are from a few hundred to 3,000 years old. There was a human skull 2,300 years old.
Objects from the wars include personal belongings like soldier clothes, hats, radios, watches and weapons.
The section displaying biological objects showed land animals, amphibians and aquatic animals. There were photos of leaves of the typical plants in the mangrove forests of Can Gio. When going around the museum, we saw countless empty drinking bottles.
We went to the circus stage about 100 metres from the museum. Hundreds of people were waiting around the circular stage under a roof.
The animal-trainer started by letting three dogs jump through a ring, ride on a seesaw and roll tubes; then, he made two monkeys do activities that Vietnamese farmers used to do, like grinding and pounding rice, and carrying water and firewood, all while walking on a small iron stick placed across two barrels.
Next was a performance by a crocodile with its mouth wide open, wagging its tail and jumping up like it was trying to catch prey. The trainer ended the show by putting his hand into the mouth of the cold-blooded animal.
Near the circus stage was a place where tourists could hire a six-seat speedboat for VND450,000 ($21.43) to go and visit a place which used to be a force base of Vietnamese communists during the Vietnam war in the mangrove forest. However, the tide was low and there was little water in the canals. We did not take the trip and walked around instead.
Hundreds of monkeys kept following tourists expecting food. At times, somebody was startled when a monkey snatched food or drink from his or her hand. The monkey climbed a tree ate the meal. â€˜Some people have had their food, drinks and even cameras snatched by the monkeys,â€™ a security guard said.
Food for monkeys can be bought here for VND3,000 ($0.14)/ bag. When a tourist buys a bag of food, several monkeys rush up and wait. Some even put their front legs around a leg of the tourist or jump and sit on his or her lap to wait for a pea or a piece of potato.
We visited an area of about 5,000 square metres with a wall around in which they crocodiles are raised. Tourists can pay VND20,000 ($0.95) for a fishing game. Three tourists got baits and dropped them where there were hundreds of crocodiles waiting. There were dozens of open mouths on the water surface. Sometimes a crocodile even rose out of water to catch the bait. Its jaws then closed fast to produce a sound that made the tourists all laugh with excitement.
After walking round the Monkey Island Tourist Area of 2,140ha, we saw that it was a forest area rather than an island like its name. We raised a question about it and the tourist guide said, â€˜In fact, this is a monkey conservation area, but people call it Monkey Island.â€™