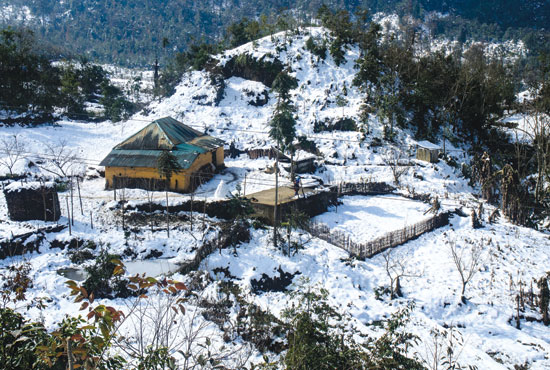 During that time, brigands from all around came to loot the villages. They used catapults to destroy dwellings, thus making the cold even colder. Giang (Heaven) heard the laments of the local people, and sent Hong Ngai Mountain God down to teach the Hmong, Yao and Ha Nhi peoples the way to build rammed earthen wall houses to protect themselves from the cold and the bandits. Since then, the Hmong of Hong Ngai Village knew how to make rammed walls. This is also the village with the best rammed wall houses of Y Ty highland commune in Bat Xat Dist.

The Hmong people of Hong Ngai Village have a special procedure of house building. According to Mr Vang A Su, 56, an ex-chairman of Y Ty Commune, before making a house, a Hmong family has to choose a good day and time and a flat area of 40 – 50 m² of land. They have to cook a chicken and some sticky rice to make a sacrifice and pray their house would be strong and endure the centuries. To have four walls as strong as steel that even bullets can’t penetrate, they have to find an adhesive kind of mountain soil. First, Hong Ngai villagers use stones to make the house foundation. The foundation is built on the ground, without digging in to it as people in the low lands. Then, they reinforce strong boards to make formwork, much like those for making concrete slabs. The walls of a 40 m² house must be 40 cm thick. They fill the form with the selected soil and beat and bray it hard with pestles until blows leave no mark. The boards removed, the wall looks smooth, as if filed.

Building a rammed earthern wall house at Nam Dam Town, Quan Ba Dist., Ha Giang Province. Photo: Nguyen Bach Chien
Then they make the next level on top of the built wall. Each such level is about 40 cm high. They fill it with soil and bray it again exactly the same way. The upper layer would bond with the lower as one. Layer upon layer, it takes months to finish the walls. Mr Vang A Su told us that five-six form layers would be enough, but some families make seven-eight layers. Some in Pha Long of Muong Khuong District even make nine layer-tall walls.

The walls finished, they use oak, Fujian cypress or menghundor wood to make the house frame. None of the walls have piers. Wooden pillars inside do the reinforcement. After the frame come the roofs. The Hmong of Hong Ngai used to thatch their roofs. Since the Government introduced the 135 Program, they modernized their houses with cement sheets. In Bac Ha District, Mr Vang A Tuong built a two-storey house in 1921, roofed with peeled layers of cypress wood, still a wonder of Lao Cai architecture for visitors to contemplate.

Hmong rammed wall houses at Y Ty have a front door in the middle and a back door connected with a buffalo or horse stable at the back. They also have one or two hive-like windows for ventilation near the front door.

A rammed earthern wall house at Y Ty Commune. Photo: Nguyen Binh
Ha Nhi rammed houses at Y Ty are somewhat different from the Hmong ones. They are square instead of rectangular. The wall faces, both inside and outside, are buffed smooth. In the house they build another wall, also earthen, about 1.5m from the door. Behind this wall is the kitchen and bedroom of the house owner.

Seen from above, the ethnic rammed wall houses of Y Ty look like giant mushrooms on a mountain slope, very nice, cosy and cute.
Major Ha Duc Hon of Y Ty border patrol outpost, who spent long years living on this land and studying rammed wall houses, told me that this is a unique feature of residential architecture of the Y Ty highland. Inside the house, it’s warm in the freezing cold of winter and cool in 37 the summer. The walls are bulletproof and don’t shake at all, even when butted by buffalo.

A rammed earthern wall house at Y Ty Commune. Photo: Pham Bang
When building rammed wall houses, the ethnic people of Y Ty avoid bare hills and mountain slopes near creeks, where landslides are frequent. Otherwise, even hurricanes and tornadoes can take away only the roofs. The house remains strong like a castle.

Hong Ngai Village of Y Ty Commune currently has 71 very beautiful rammed wall houses. Lao Chai, Sin Chai 1 and Sin Chai 2 Villages have about 30-40 rammed wall houses each. Some decade-old thatched roofs are covered with moss, which makes them look even more attractive. Groups of domestic and foreign visitors and researchers have come here to see the houses. Many couldn’t help remarking ‘What a wonder!’n