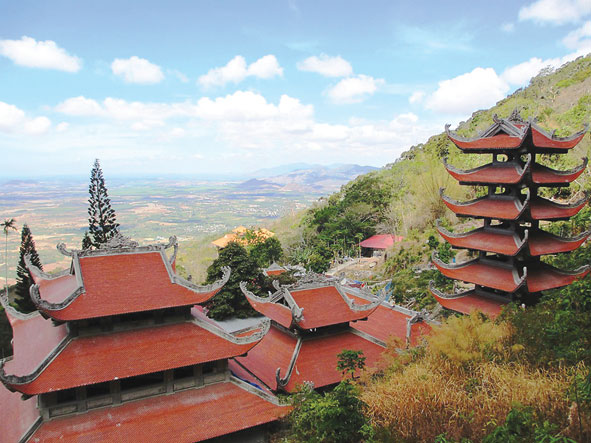 Over a thousand stairs lead up to Linh Son Truong Tho, which houses the famous 49m long, 11m high statue of Shakyamuni entering Nirvana. More than 500m above the sea, this statue was recognized as Asia’s biggest statue of Shakyamuni 3m longer than the reclining Buddha in Thailand’s famous Wat Po.
Ta Cu slope is cooled by a pristine forest that hosts many rare precious trees such as Siamese rosewood, queen’s flower, makha, jamba ta-khian, jamblon, jambay, and evergreen wisteria interwoven by wild vines such as giloy and dragon blood making a deep, colossal green mass. Here and there, a small creek with crystal clear water crosses the path. An elusive aroma of wild orchids and other wild flowers persists in the air. But most impressive is the fiery red colour of the flowers of the sandbox trees, very popular in the forests of south Truong Son, leafless in the dry season. Birds chirp light-heartedly high up in the canopy.
Behind the sheer 45-degree Bang Lang slope, Linh Son Truong Tho stands at 563m above sea level. The average temperature is 18-22oc all year round. According to geologists, this used to be a volcano from the first tectonic period, so the soil contains gold mineral sand and a few other precious stones. Those too lazy to climb the stairs can sit in a cable car and slide 1,600m up to the pagoda while contemplating the grandeur of nature.

Before seeing the great reclining Buddha, visitors have a chance to bow to Ksitigarbha Bodhisattva and a group of the standing ‘Trinity’, with 7m tall Amitabha in the middle, and Avalokitesvara on the left and Manjushri on the right, both 6.5m tall. The view here is panoramic with green masses of mountains and an old pagoda vaguely seen behind the canopy. Built by architect Truong Dinh Y in 1962-1966 with reinforced concrete, the Buddha entering Nirvana statue is the centre of Ta Cu Hill. The artist had succeeded in expressing Buddha’s ultimately peaceful and tranquil state of mind as he entered Nirvana.
Linh Son Truong Tho Pagoda has a long history. In the mid-19th century, monk Tran Huu Duc (1812 – 1887) aka prior Thong An, titled Huu Duc, moved from Phu Yen to Binh Thuan and built a grass hermitage in Kim Thanh (now Bau Tram) to practice religion and medicine. In 1872, then a famous medicine man, he moved up the Ta Cu Hill. In the 33rd year of Tu Duc’s reign (1880) the Queen Mother fell seriously ill and the monk sent her his medicine. The Queen recovered, and King Tu Duc named the pagoda ‘Linh Son Truong Tho’ and the monk ‘Super-Reverent.’
After generations of faith keepers, in the 60s of the last century, the pagoda was renovated and the reclining Buddha built. Ta Cu Hill and the surrounding area were still desolated at the time. The path up to the pagoda was precarious on steep slopes with sheer cliffs on its sides. Thousands of tons of concrete and steel were moved up to the place by hand.
The finished sculpture highlights the solemnity of Linh Son Truong Tho amidst the grandeur of the nature of Ta Cu. A granite field spreads beneath the statue, and a grove of lush, ageold Ta-khian, queen’s flower and mango trees surrounds it. On the slope next to the Reclining Buddha statue, a banyan tree and a queen’s flower tree, both over 500 years old and about 50m tall stand whispering to each other their secret wisdom.
Since 2002 a 250,000m2 area of Ta Cu Hill was transformed into a tourist destination with an over VND65 billion investment. During the holidays, and full moon days, especially on the commemoration of the Founder of the Mountain pagoda (the 5th of the 10th lunar month), visitors come by the thousands.