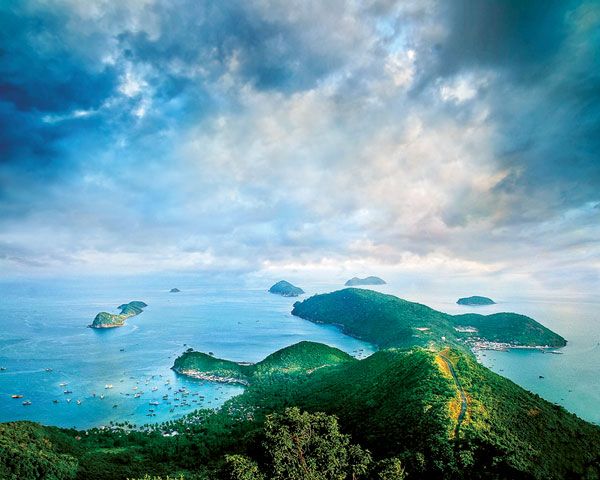 65km off the shores of Rach Gia City, Kien Giang Province, Nam Du Islands were a refuge of Lord Nguyen Anh (1762-1820), notorious as the man who defeated the Tay Son rulers to take the throne in 1802. This fact alone urged me to go there. After 2 hours of bobbing on the waves, the group of 21 islets appeared on the horizon. 15 minutes later, the high-speed boat docked in the harbour of the Big One, a 500ha island which is the centre of An Son Commune, head of 15 inhabited islands.

The milky way in the sea

Having paid VND150,000 for a room, I took a walk around the Big One. A road asphalted since the time of the French leads to the island peak, 295m above the sea. The vastness of the sky and the sea at different layers opened before my eyes.
How big a personâ€™s heart must be to live in this borderless universe. To the east of me, the centre of An Son Commune with about 300 roofs lining its shore. On the west, Royal Beach fishing village with 200 roofs hides under coconut trees, and hundreds of fishing boats bob lightly near the shore. The lighthouse keeper told me, â€˜Itâ€™s called the Royal Beach because King Gia Long used to live there.â€™ 3.5 nautical miles to the east Hon Ngang Island, dwellings and boats looks like a town floating in the sea. Itâ€™s the only island without vegetation cover. All other islands of Nam Du are covered with a small forests, not tall, but quite dense.
At nightfall, lighthouse’s beam begins to turn, scanning the sea with powerful illumination. For the first time I have the sense of the night amidst the sea under strong winds and myriads of stars. Electric lights of fishing villages and fish farming rafts look like stars bobbing on the water. With its density of houses and boats, Hon Ngang looks like the seaâ€™s Milky Way.
The next morning I hired a boat to visit the neighbouring islands, Hon Non Ngoai, Hon Nom Giua, Hon Nom Trong, Hon Dam, Hon Hang, Hon Moc, Hon Tre and Hon Nhan. The dozen islands took me half a day of scouring. They all seem pristine, untouched by men, with craggy rocks that look like crystallized minerals.
Every now and then I saw a lone house which seemed to have been carved by the waves on the rock face for millennia. The boatman told me those belong to the people who came here from the mainland about 5 years ago to settle. At that time, they must have been true Robinson Crusoes.
Passing by a little islet, the boatman said, â€˜This is the Shirt Isle. Itâ€™s called so because King Gia Long once threw away a torn shirt on it.â€™

Satisfied with the feast of clouds and waves around the Big One, I headed to Hon Ngang, the centre of Nam Du Commune, which included the adjacent islets such as Hon Dau, Hon Ong, Hon Bo Dap and Hon Mau.
30 minutes later, I stepped onto the Hon Ngang Pier, where thousands of boats of all sizes and fish farm cages docked. Hon Ngang is just a quarter of the Big One in area, but it hosts about 700 makeshift houses which occupy nearly half the area of this bald isle.
I found myself on a web of dirt roads zigzagging amongst a dense forest of huts. At the centre of town, there was a bazaar boiling in the heat of trading. Dozens of fish steaming furnaces line the populated area. Life on Hon Ngang is very typical of those faraway islands. Talking to some people at Hon Ngang, I found that the folks here are very free and open-minded. Perhaps this free spirit which I thought was boundless was there not only because the island was part of the west of southern Vietnam (which nurtures freedom), but also because itâ€™s so far from the mainland. A day spent on the island of Hon Ngang was worth my while.
The next morning I decided to visit Hon Mau, the most beautiful place of the Nam Du archipelago. A 20 minute boat ride took me to the 100ha island. It was so scenic compared to the bustling Hon Ngang. A 100-roof fishing village huddled between two sandy beaches and three rock beaches, all tender and undaunted: The Northern Beach, the Black Rocks, the White Rocks, the Untamed Rocks and the Southern Beach.
From Hon Mau, I headed directly to Hon Dau, a relatively large one compared to the other islands. Primeval forests cover 95 per cent of the area. The 20 roofs of Home Beach fishing village hide under the canopy of 20 lush coconut gardens. The life stories at this most peaceful village of Nam Du were just as humbling.

Because the sea around Nam Du rarely has storms or big winds, itâ€™s safe to go all year round. But December to March is the best time, when Nam Du is most beautiful and enjoyable. The only way to get there is from Rach Gia Harbour. A speed boat ticket is VND500,000. A low-budget option is by usual boats with two way ticket price at VND300,000 â€“ VND340,000. All boats to Nam Du leave at 8-9 a.m. every day except when the weather is bad. Both Hon Ngang and Big One have inns for tourists at VND150,000 â€“ VND200,000 a room. Otherwise, one can negotiate to stay at a fishing family home. If you come to Nam Du in dry season, please spare your drinking water to share with the locals.