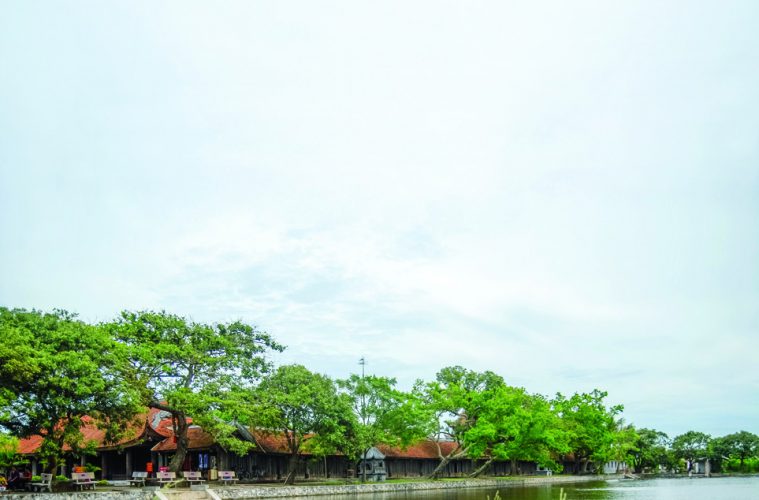 FETE AT VIETNAM’S MOST SPECIAL PAGODA

A thousand-year-old party to celebrate a famous monk

The age-old folk song shows the attractiveness and importance of Keo Pagoda’s fete for the folks of Thai Binh Province and the Northern Delta in general.
Historical records show that this ancient fete takes place on the 13, 14 and 15 days of the ninth lunar month (This year the festival falls on 13, 14 and 15 October). This is the biggest fete among Keo Pagoda’s festivities, and its purpose is to commemorate the Great Zen Priest Khong Lo (1016-1094).
Keo Pagoda in Duy Nhat Commune, Vu Thu District, Thai Binh Province, is a nearly 400-year-old complex of hundreds of architectural structures with countless of carvings that culturologists consider wood-carving masterpieces. In 2012, the government recognized it as a special heritage.
In modern times, Keo Pagoda’s fete still retains many sacred traditional rituals and folk games. The games include charming songs on boats, martial art contests, a betel quid-making contest, tug of war, pot smashing blindfolded . . . Every year tens of thousands of pilgrims come to attend the fete.

According to the Relic Management Office of Thai Binh Province, in 1061, under King Ly Thanh Tong, an enlightened, venerated monk built a pagoda in Keo Village and named it Nghiem Quang. In March 1167, under King Ly Anh Tong it was renamed to Than Quang. In 1611, flood waters of the Red River swept away Than Quang Pagoda and Keo villagers’ dwellings. After that, Keo village split into two, one on the right bank of Red River (Xuan Hong Commune, Xuan Truong District, Nam Dinh Province) and the other on the left bank (Duy Nhat Commune, Vu Thu District of today’s Thai Binh Province.)
Life stabilized, the two villages built a pagoda each, both named Than Quang and nicknamed Keo. The one in Nam Dinh Province is called Nam Dinh Keo Pagoda, and the one in Thai Binh Province Thai Binh Keo Pagoda.
Ancient records say that Thai Binh Keo Pagoda was built by a mandarin named Hoang Nhan Dung. It was the time of a civil war between Trinh and Nguyen Lords, and Trinh Lord allocated only 100 logs of precious wood for the pagoda. Mr Dung spent 19 years (1611-1630) to raise funds and acquire timber. The construction took 28 months and finished in 1632.
Since then, Thai Binh Keo Pagoda has undergone 5 renovations, but almost no changes to the original architecture. The premises are 500m wide, about 200m deep, and the edifices occupy about 58,000m2.
Thai Binh Keo Pagoda includes 21 major structures, 154 compartments, and is one of the brightest examples of the ‘Buddhist front, Saint rear’ architecture of Vietnam, according to the Vietnam Bureau of Cultural Heritage.
Almost all the pillars, beams and compartment walls of all the structures in Keo Pagoda are made of precious timber.

According to culturologists, Thai Binh Keo Pagoda was ‘one of the biggest pagodas of Vietnam at that time.’
The Vietnam Association of Arts commented on the architecture of Thai Binh Keo Pagoda as follows: ‘This venerated Zen priest who could turn roof tiles into gold, river water into wine, who seized all the copper from the North (China) to cast the “Four Great Qis of the South”, who tamed the tiger soul illness of King Ly Than Tong, must have vested much of history and theology into the one-of-a-kind architecture of Than Quang, or Keo Pagoda.’
The main structures of Keo Pagoda include the Triple Outer Gates, Triple Inner Gates, Buddha Edifice, Guardian Edifice, Three Refuges Edifice, Temple of the Saint, Nation Pillar Edifice, High Edifice, and Bell Tower…
The Triple Inner Gates is considered by the Vietnam Association of Arts as a ‘one-of-a-kind structure that expresses spiritual values in ways seen at no other temples, pagodas or palaces. It represents the best of the artistic styles of the early XVII century’.
Moreover, Thai Binh Keo Pagoda still preserves hundreds of Buddha and Saint sculptures and sacrificial utensils of the Le Dynasty. The most valuable relics are the items of personal use of Zen priest Khong Lo; a string of ivory beads, a big lime-pot and three snail shells that shine like they are gold-plated.
Perhaps for those reasons some researchers say that Thai Binh Keo Pagoda is a ‘museum of the Le Dynasty’. The worshipped persons at Keo Pagoda are Buddha, the Saint (Zen priest Khong Lo) and a few biggest contributors to the construction of the pagoda.