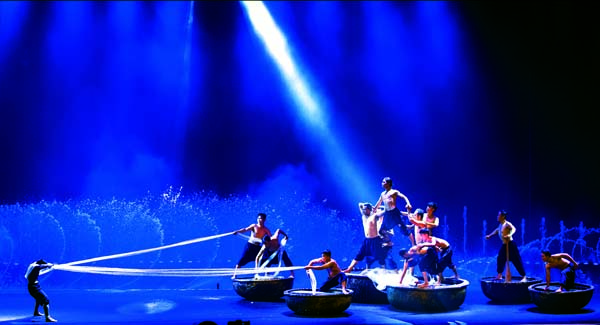 “Fishermen Show” is a modern performance art program that encompasses elements of dance, song, drama, vaudeville etc. mixed together to create an extremely lively and scenic picture of the fishing village of Phan Thiet, a story of the melding of the Kinh and Cham cultures melted together, with two main features;, namely the whale worship in the Pray for Fish Rite, and the Kate Festival of the Cham people.

Fishermen Show – a highly sophisticated performance
Fishermen Show is an exotic and rare show performed by local artists, musicians and dancers in what is billed as the currently the biggest basket boat- shaped theater of Vietnam, one with an over- 1000 spectator capacity. This show has been can be compared with the world-­­­­­renowned shows such as Cirque du Soleil show of Las Vegas (US), Song of the Sea and Wings of Time shows of Singapore, Siam Pyramid show of Thailand or the Smile of Angkor show of Cambodia etc. Contemporary professional dancers and local artisans playing traditional musical instruments, singing live singing on the stage, acrobats flying over LED screens and color fountains, sand dunes flying and ox carts rolling, all make up an unforgettable show on this very land of sand and wind.
The show tells the story of the Lord Fish of the South Sea (a whale) that was stranded on the Phan Thiet shore in 1762. This was the year the Van Thuy Tu fishing village was founded, and also the year that marked the flourishing of Phan Thiet fishing village. The body of the Lord is worshiped at the Van Thuy Tu village temple, while its soul was reincarnated in the form of ­­a fisherman who felt for the hardship and the bitter fate of the locals and often helped them in dangerous situations. People respectfully call him respectfully the Lord of the South Sea.
In this legend, the fisherman who travelled across space and time learns about the routine activities of the local villagers from the scenes of a fish kermis, from drops of sweat falling on white brine pits at a local fish kermis. He wandered into Cham villages and an ancient tower of Poshanu, and fell into a divine trance in a divine dance devoted to Lord Shiva. He rejoiced in his the love for a Cham girl on Mui Ne flying dunes in a Kate festivale day under cheerful ginang drum rolls and the joyful tunes of saranai flutes. Feeling empathy to the songs full of sorrow and hope that women sang while in waiting for their husbands who were at the mercy of the sea, the young man used his power to help them through the perils. The show ends with a scene of Pray for Fish festival at Van Thuy Tu, expressing the belief that the sea will protect the people of this proud, resilient land and grant them prosperity and a happy life.

The people who made the Fishermen Show
Nothing was spared to make it perfect, from studying the Binh Thuan Cham culture and fishing village culture, developing and modernizing ethnic music under the guidance of the master of musical Manh Tien, to recruiting the general director and choreographer Tran Ly Ly, who was kneaded and moulded in the world’s renowned cradles of art in Australia, France etc. to create the dances. For over a year, these composers, musicians and choreographers literally ate, slept and worked together with the local artisans to cut and polish this gem that is called the Fishermen show.
It wouldn’t be right to not mention the father of the show and of many other cultural projects on this Mui Ne – Phan Thiet land, a businessman and a son of these shores, Mr. Tran Ngoc Zung. A full scholarship recipient of many famous schools of Australia and France, having worked and acquired a prominent name in the US, he followed his heart’s call, returned to his native land and invested in a series of high caliber projects in the fields of culture, tourism, food and beverage. After the show, he took a few minutes to talk to us. He has long been dreaming to present the beautiful blending of Cham culture and fishing village culture on his native Phan Thiet shores to the world. Having been to many countries and seen their impressive cultural shows, he craved to create a show of the same stature. He thought it would be good both for promoting tourism and preserving the region’s pristine original cultural value. That’s the reason for his determination to invest in the theatre and the related projects.
In 2012, Tran Ngoc Zung returned to Phan Thiet. It took him four or five years of planning, building and, executing before the items came to life one by one. His restaurant, fishing village theater, and fish sauce museum are now open to receive visitors in a 1.3ha premises. He plans for the show to be on every night and light up the Phan Thiet shores for at least 20 years.