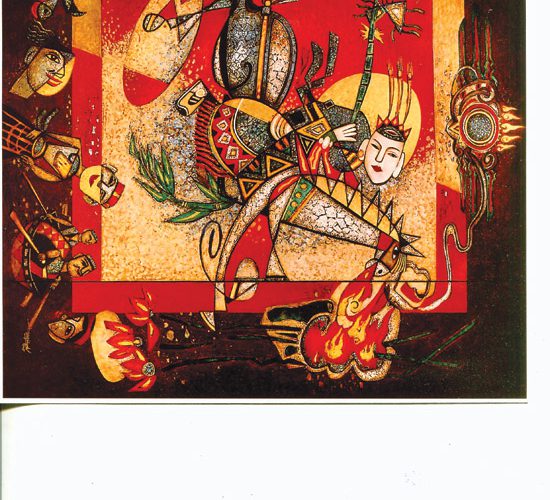 Folk tales theatre and musicians lacquered in crimson and gold

While they may not have entirely invented it, one form of the fine arts that the Vietnamese have developed into their own and one at which they are universally acknowledged to be the world’s best, is lacquer painting. This is called ‘son mai’ in Vietnamese. The tradition, surprisingly, goes back no further than the 1930’s and is a laborious process involving as many as ten layers and employing egg shell, clear varnish derived from the sap of a certain tree, silver leaf, charcoal powder and even human hair. I had previously thought lacquer was something used only to decorate wooden objects for practical use and indeed, I possess a beautiful lacquer-adorned wooden bowl, presented to me years ago by some Russian students from the Far East of their land. But the other day, I picked up a hardback book featuring over a hundred plates of the work of artist Hung Khuynh. They are so beautiful both in their lovely hues of dark red and golden yellows and their traditional Vietnamese themes that I am longing to see some of them for real at an exhibition. I also feel the need to communicate to you the existence of this wonderful tome, so I am presenting you with this review.

Around twenty five per cent of the plates treat the theme of musicians. The ancient chamber music genre ‘Ca Tru’, often shown to tourists these days with female vocalist, three-string lute player and percussionist, is a favourite of his. He certainly has an eye for the girls, with many pictures of ensembles of lovely lasses with long, silky black hair playing stringed instruments. He also takes the old chestnut of the boy on the back of the water buffalo playing the flute and by distorting the scenes in almost a cubist way, makes it his own.
One double-page spread of a quartet of girls playing mandolin, moon lute, zither and long flute particularly impressed me. The young ladies in their long, flowing garb form the centre piece, but all around are iconic buildings of Hanoi: the bridge going out to the island on Hoan Kiem Lake, the One-Pillar Pagoda and the Flag Tower. The twelve signs of the zodiac are depicted in clouds; six on each side. Then, departing from traditional-only scenes, the skyscrapers of modern Hanoi are shown in the background. The explanation for this is given in the title, ‘Thang Long – Dong Do – Hanoi’. The book was published to commemorate the one-thousandth anniversary of Hanoi’s founding.
Other forms of the performing arts taken as themes are classical drama, dance, and water and land puppetry. He also depicts people in village festival scenes of a bygone age with a cast of thousands and multiple activities. There is a double-page spread of musicians adding to the gaiety of a dragon boat festival. The only nude – and it is by no means erotic – is of a minority dancer wearing a crown. She looks to be Khmer.
The titles of these paintings are simple and unpretentious. The few pages of text in Vietnamese, English (rather poor quality translation, I have to say) and French describe Quynh as a straightforward man. Pictures of legends are given the normal name of the story – ‘Children of the Fairy and Dragon’, ‘Bac Ninh’s Music’, ‘The Paper Knight’ and the famous legend of ‘Restored Sword’. With daily activities, too, the title you get is what you see –‘Going to Market’, ‘Fishing’, ‘Childhood’, ‘Boat Race’, ‘Farmer’, and ‘Mask’, for example.
Only on one page does Khuynh deviate from his magic realism. This demonstrates his ability to paint very realistically indeed. They are three still lifes of cups, bowls, fans and opium pipes. I saw only two occasions in which he strays from Vietnamese heritage. One frame is Adam and Eve by the tree looking fine in Paradise and with no snake in view. The other is when he playfully employs a king from a pack of Western playing cards in a scene.
Khuynh’s paintings radiate warmth. Partly, this is coming from the use of vibrant colours, which are probably even brighter on the actual canvass. Partly also, this is because he transports you to a world where everyone appears happy. Yet this is no Marc Chagall, who mixes dream with reality to get happiness. Khuynh is firmly rooted in reality, only it is an idealised reality taking you back to a past that perhaps never really existed or is now summoned up as Vietnamese culture to present to the foreign visitor. This art is escapist, but only in the very best of taste. If you are feeling depressed about the reality of everyday modern Vietnam – the motorbikes, the noise, the rush to modernity, then this is your tonic. Just browsing through the pages will restore your positive attitude and love for Vietnam.
All in all, a very pleasing book of pictures to warm your soul and enjoy the spirit of Vietnam. It is further evidence that when it comes to art, Vietnam has some world-class exponents. Horace the Latin poet wrote, ‘Painting is poetry without words.’ Whilst this is not always true with modern art, which may be out to shock or have other agendas, it is a simple truth when applied to Mr Khuynh’s work.
‘Ky niem 1000 nam Thang Long – Dong Do – Hanoi’ by Hung Khuynh is published by Fine Arts Publishing House, 2010. Email the artist at hungkhuynh@hotmail.com or visit the website hungkhuynh-art.com or the Two Tigers gallery site.