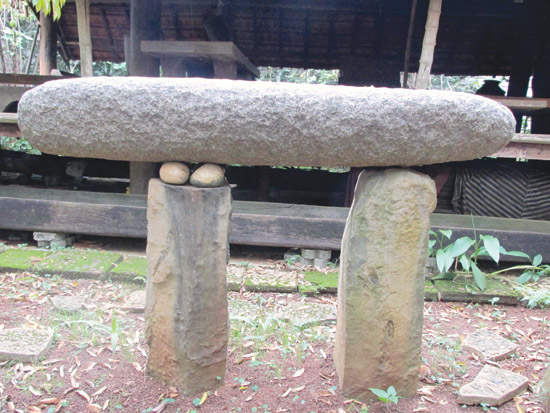 For whom the bell tolls

Mr Thanh and
a complex of stone
daisy fossils

To many dwellers of Buon Ma Thuot Township, Dak Lak Province, the café at 599 Le Duan Street is no longer an eccentric place with many hundred-million-year old fossils and rocks, but a sanctuary containing precious relics of geological history collected by its owner, Mr Hoang Thanh. He was born in 1959 at Sia Town of Quang Dien District near Hue. During the 1968 offensive, his family drifted to Buon Ma Thuot. He became a road construction mechanic. In 1991, he quit his job and opened a repair shop at home. He dreamt to have a beautiful garden of his own. So, he bought some land and started building the garden of his dreams.
Then he recalled the rocks and stumps he saw at construction sites. He immediately went back and took them home. He spent money to hire big trucks for the job. His passion for rocks became famous, and people started to collect strange looking ones and sell them to him. ‘My friends think that I must be a screwball to spend money on scraps like this,’ Mr Thanh laughed. His passion for rocks grew stronger with time. He sold his big house in the city to have money for the rocks. He looks for and buys all the rocks and stumps he likes just to decorate his garden. Once, he found three large rock crystals. No vehicle could reach the place where he discovered them, so he hired an elephant to pull them. Forest rangers stopped him, suspecting something illegal, but upon seeing the rocks, they all burst into laughter.
The garden was completed with hundreds of rocks, big and small. Mr Thanh opened a café to show them to his friends. ‘Some liked it, some didn’t, but I was just happy with my work. Soon, my garden was honoured to receive Prof. Vu Ngoc Hai, known for his work in the field of geology and minerals. He was also a deputy minister of education and training. Prof. Vu Ngoc Hai said that these rocks are treasures of national significance, and he told me to carefully preserve them, because they hold the secret of the formation of the Tay Nguyen highlands about 200 million years ago. Only then I and my friends understood the great historical value of the useless rocks in my garden’, Mr Thanh recalled.
In March 2010, Dr. Luu Dam Cu, Director of the Vietnam National Museum of Nature sent a group headed by Dr. Nguyen Huu Hung, a palaeontologist, to Mr Thanh’s garden to inspect his collection. According to them, his collection holds the record about the formation of Tay Nguyen highland, a basis for geo-cultural study of the local ethnicities. After studying Mr Thanh’s samples, the Vietnam National Museum of Nature expressed deep interest and wished to possess his mollusc fossils as a resource for research and exhibition. Mr Thanh agreed and handed over the largest paleontological collection of Tay Nguyen in the world (11.5 tons).
Mr Thanh’s garden has a precious item called the stone bell. 12 years ago, while clearing a pass in Lak District, he saw a rock that looked as if it was made by human hands. It was cylindrical, 2.5 m long, 60 cm in diameter and weighed about 800 kg. He immediately hired a truck to take it home and used a pulley to bring it inside. Suddenly, the iron chain hit the rock and made a sound similar to that of a bell, to the amazement of all. So he hung it up and uses a small stone to knock it.
The rock looks even more peculiar when the sun’s rays fall on it; it shines as if gold-plated. Looking closely, there are golden grains sunken in its fabric. ‘This is a sandstone rock, so it’s porous, not hard, and those are yellow sandy silt grains, not gold. But they shine under sun rays, just like gold,’ Mr Thanh explained. He loved the rock so much that he named it and his café the ‘Stone Bell’.
Mr Thanh took a pebble and knocked slightly on the other side of the ‘bell’. It resounds beautifully, like a temple bell. He walked around it, knocking evenly. The bell made different tunes when knocked at different places, low and high, clear and hoarse, and it all mixed into a lively and seductive chorus of the forest. The finer and clearer the weather, the more beautiful it tolls. And it remains dull in cold, rainy or foggy weather, he says.
Some people have seen stone lithophones, but stone bells are never heard of. The bell became an attraction that lured many curious visitors to this garden café.
Besides the bell, Mr Thanh also owns an ancient stilted house with a completely original interior, a big nine-slab lithophone, about 40 small lithophone slabs and over 300 fossil samples, among which is a complex of stone daisy fossils with over 20 individual flowers, weighing over 20 kg, that occupy a special place in the house. Recently, a collector from Ho Chi Minh City offered three billion dong (about $150,000) to buy his stilted house but he refused. ‘A Japanese businessman who specialized in precious stones came to see and listen to my stone bell. He then offered me a large sum for it, but I refused for a simple reason: it belongs to Tay Nguyen.’
Mr Thanh told us his family will soon move abroad and cannot take his collection to a foreign land. He wishes to hand over his treasure to a man as passionate and respectful as himself, or to a museum. ‘Only those who love and cherish history can take a good care of things that belong to the past,’ he said.
*The article was printed on 20 September, 2014 on the Tien Phong website.

Text and photos by Thanh Ha