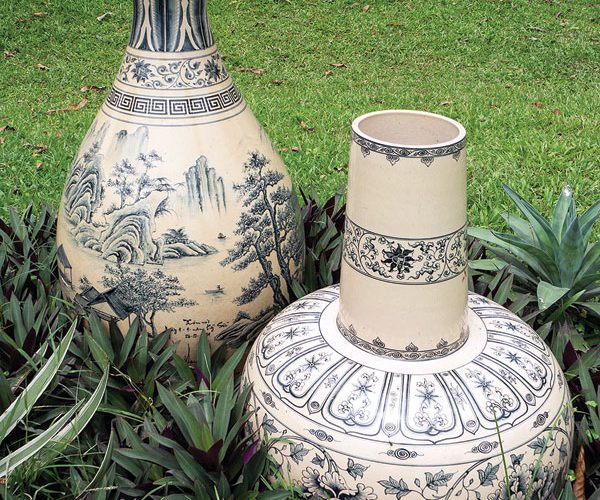 A famous trade village buried by civil war
Deeply impressed by an antique pot, Mr Anabuki wrote to the then Party chief of Hai Hung Province, Mr Ngo Duy Dong. In the letter he asked, ‘Was there a Nam Sach County under King Le Nhan Tong? Where did Ms Bui Thi Hy, who drawn patterns on the pot, learn the art of pottery painting? Where could a pottery kiln be at that time?’
The letter made Hai Hung officials mobilize culture experts for a project named ‘Hai Hung antique pottery research.’ After 2 years of scouring ancient texts, they made excavations in 14 locations in Chu Dau village of Nam Sach commune. Chu Dau means a dock on Thai Binh River, very convenient for pottery trade in the old times.
The 2m deep excavations have unearthed many valuable antique pottery items which they gave the common name of Chu Dau. Fuelled by the success, the excavations were expanded to the adjacent areas. To date, 8 excavation operations have been conducted at Nam Sach, Thai Tan and Minh Tan Communes, uncovering thousands of items such as cups, bowls, plates, pots, jars, censers and animal statuettes.
Although there are over 100 sites still waiting for excavation, old texts and actual finds let researchers conclude that Chu Dau is a high-end strain of fine ceramics which reached the ‘jewel-transparent, paper-thin, ivory white and bell-resounding’ quality. The trade flourished in 13th–14th centuries, reached its peak in the 15th, 16th centuries and was lost in 17th century during the civil war between feudal clans Trinh and Mac.
The power struggle forced many artisans to move to other places to continue practicing their art. Those who stayed changed to straw mat weaving and rice growing to survive. The fame of Chu Dau ceramics gradually faded, and its proof buried.
In 15th century the ceramics considered by researchers as ‘carriers of deep humane values of Buddhism and Confucianism’ were exported to Holland, England, France, Japan, and Turkey.
Chu Dau ceramics combined the elegance of the Ly Era and the robustness of the Tran Era. It depicted vibrant life scenes such as a person in straw hat or in long dress, child buffalo herders, birds on a blossoming apricot branch, or spotted doves hovering over a field. The enamel colours were just as vibrant, with white, opaque, green, moss green, shades of yellow, and the three shade (green, red and yellow) combinations.

Reviving the antique patterns
13 years after the ceramic excavation at Chu Dau, researchers were once again stunned to hear that a wrecked ship carrying 3000 items of Chu Dau ceramics was found in the seas of the Philippines. In 1997, in turn, the Vietnamese found another wreck with 340,000 items of ancient Chu Dau ceramics near Cham island of Quang Nam Province.
In 1996, Hai Hung Province split in to Hai Duong and Hung Yen Provinces. Chu Dau Village is now part of Nam Sach District of Hai Duong Province, about 16km Northwest of Hai Duong City and 70km from Hanoi. Early in 2001, a local businessman named Nguyen Huu Thang made up his mind to restore Chu Dau Trade Village with the help of artisans from Bat Trang pottery village of Hanoi, where many ancient Chu Dau artisans found refuge over 500 years ago, and other places where the trade is flourishing such as Binh Duong and Bien Hoa.
Within just a few years, in Chu Dau and the adjacent areas, hundreds of talented potters have been trained. The ancient patterns and enamels have also been restored by the artisans. Shops and workshops are resurging everywhere.
Following the footsteps of ancient artisans, today’s potters at Chu Dau revive traditional goods and invent new ones to satisfy the demands of modern life. Chu Dau Ceramic Trade Village currently makes 4 main groups of products: geomancy ceramics, souvenirs, decorative ceramics and vases.
In May 2003, Chu Dau exported their first batch of goods to Spain. Since then, Chu Dau ceramics have spread to many other countries in the world.
Today, Chu Dau ceramics are exhibited at 46 famous museums in 32 countries.
Just as the trademark of Chu Dau ceramics is regaining its old-time gloss, the village is also receiving traders and tourists from all over the world. To satisfy their demand, in 2004 Mr Thang invested to build a thousand-square-metre ceramic exhibition house.
Besides viewing and buying fine ceramics at the Exhibition, tourists can also learn about the historical relics such as ancient kilns and the Temple of the Ancestor of the trade, Sir Dang Huyen Thong. Visitors, if they so desire, can also engage themselves in the production process, from shaping to painting, to signing the products.