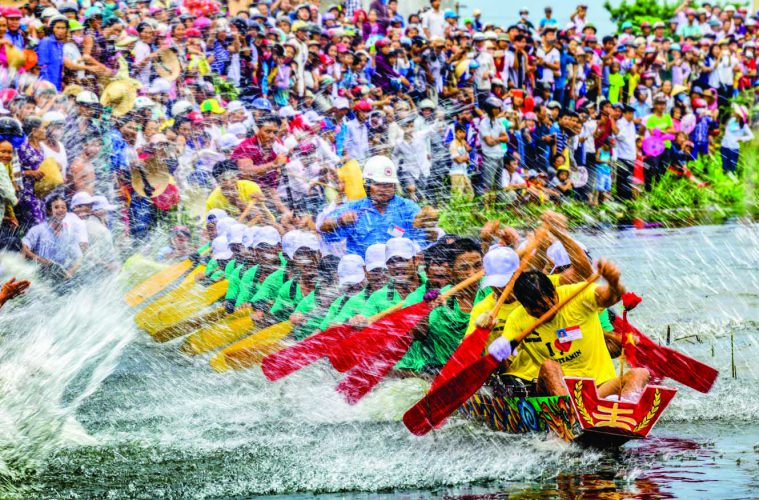 Once upon a time, drought dried the Kien Giang River and sucked life out of plants and grasses. One night, as the story goes, the tutelary god visited a village elder in his dream and told him, ‘To have favourable weather, the people should pray to the Gods and have boat races to clear the river flow…’ Since then, every spring when the field work is less demanding, the people along the river have a boat race festival to pray for good weather, good crops and happy life.
That was how the boat race came to being an indispensable part of life on both sides of Kien Giang River, a 58-km long branch of the famous Nhat Le River in Le Thuy District, Quang Binh Province.

The boat races in Kien Giang have a mythological origin

On 2 September, 1945, Vietnam Independence Day, Le Thuy people were so happy that they organized a boat race right away without waiting till spring. Freed from foreign shackles, they called the day the ‘Independence New Year’.
Since then every ‘Independence New Year’, Le Thuy sons and daughters direct their thoughts and feelings home, wherever they live. The day, especially the Boat Race, has an important place in the local cultural life, as described in the folk ballad ‘Hiking North or riding South/ Rush back home on September the second/ Our New Year is vigorous/ With waves of water, people, and flags.
To prepare for a boat race on Kien Giang River, each village spares nothing to hire the best boat masters and buy the best quality wood to make a pair of boats for its male and female teams. The lightweight, sharp-headed, slim race boats are 17m long, 1.2m wide, and beautifully adorned.
About 20 days before the official festival, the district’s villages conduct their ‘boat launch’ ritual. After praying and consecrating to the Gods, hundreds of young men sing their heave-ho song in unison and rhythmically push their village boats toward the river until they plunge into the water, throwing white foam around to cheerful applause.
Mr Dang Ngoc Tuan, who spent years to study and collect Le Thuy heave-ho songs and tunes said, ‘these songs are sung when somebody is pushing a boat on land or pulling it ashore. These are mostly a pair of 6- and 8-word verses to create rhythm and foster good mood in the young people who move the boat.’
After the launch, the two teams of the village begin training to prepare for the race. Early morning on the official festival day, tens of thousands of people gather on Kien Giang River banks to watch the boats parade on the river and take their starting position.
At the signal, the teams begin oaring vigorously under drum beats and the cries and shouts and cheering of the crowds on both sides of the river.