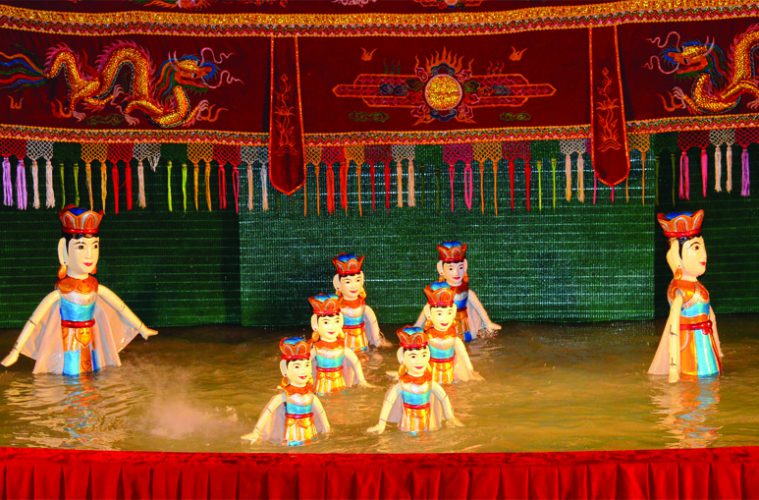 On the evening of September the fifth, it was my great pleasure to attend the premiere of The Rex Hotel’s newly-opened water puppet theatre which has taken fifty days to construct and is a first for a Vietnamese hotel. This performance was for invited members of the press and the tourist industry. I can attest this sixty-minute show is packed with vivid colours of costume and lacquered wooden puppets, action, lively music, dance, opera comedy and even water fireworks! There is never a dull moment as the scene changes every five minutes. You will be enthralled and riveted to your seat, left wondering how they managed to pack so much into only sixty minutes. Whilst the top billing is the half-hour water puppet show, the other half hour presents slices of the intangible cultural heritage of Vietnam from its origins in the Northern plains thousands of year ago. It is exceptional value for money!
The theatre is housed in the Vertical Garden, a courtyard open to the sky, where around fifteen climbing plants adorn several floors of rooms in the West Wing. The set is in glorious shades of light red. In front of the pool, which would have been the village pond in original performances in the north of Vietnam, is a large communal house of ancient times. To each side is an open-to-sides pavilion where the musicians who also provide the voices and chorus are seated. The winding staircases which lead to a much higher upper level are used for the entry and exit of the acts. Those who choose to watch while having dinner have their tables set out at ground level. The majority of the spectators watch from a covered circle above. Wherever you sit, you are afforded an excellent view of the stage. There are large wall fans and I found it more comfortable than sitting in a conventional covered theatre and also easier to imagine I was peering in on shenanigans going on in a rustic village of long ago.
The show opens with a ‘Hat Boi’ performance. This is a seven-hundred-year-old art form based on Chinese opera. Four players, highly colourfully adorned, act out martial arts. They represent the elements of rain, wind, thunder and lightning which work together to favour good conditions for the farmer. This ceremony originates from Indian legend.
This is followed by what the programme describes a ‘Unicorn baby’s birth’. I actually would have thought it was a lion dance. Two players in each costume acted out a male and female unicorn prancing around in courtship and eventually producing a cute offspring (clearly with a young child under the costume). Not often do you see such a sex scene on the Vietnamese stage!
The third display was of a dance. There was a central figure who my Vietnamese- speaking daughter told me was a fortune teller. She performed in front of an altar with fruit and candles set open it. She was soon joined by six other female dancers with fans and in long flowing traditional garb. Finally, the central figure picked up the candles and fruit and danced with them.
Next up was a very up-tempo musical performance of a musician playing a wonderful stone xylophone accompanied by a more common upright bamboo one. This stone musical instrument is from the Central Highlands and they have had them there for two thousand years.

The last cultural act was from the Imperial Court of Hue and is about three hundred years old. This is the ‘Lantern Dance’, based on Buddhist ritual. Men and women dancers appear, carrying lotus flowers in both hands and in which candles are set. They change formation in kaleidoscopic style and they offer tea, food, candles flowers, lantern and fruit.
Then came the main attraction, as banners were raised above the waters, ploughmen with buffalo rode across them and Ong Teu, Vietnam’s most celebrated puppet equivalent, came waddling across the ‘pond’. He acts as the narrator.
We were treated to a vivacious dragon dance and an agricultural scene with farmers working the rice fields and with the rice growing before our very eyes.
The next scene is the one likely to remain in the memory the longest. It is real slapstick stuff as a duck herder and his wife are seen tending the flock, only to have a fox appear who raises complete havoc. They chase him in the water and up and down a tree causing much splashing about before finally beating him to death.
Following this is a fishing scene both with rod and line and from a sampan as the bright shiny fish hilariously evade capture for a long time.
Then a male and female phoenix (along with the unicorn another of Vietnam’s sacred animals) put on a courtship display which ultimately results in the laying of an egg on the water.
Another scene ensues of children playing and dancing in the water amidst the morning mist. They enjoy much fun and games until ultimately two ‘adult’ puppets appear to supervise them.
The last scenes are of two unicorns playing ball, a fairy dance and the dance of the four sacred animals which are the unicorn, the phoenix, the turtle and the dragon. The latter spectacularly has the dragon spit fireworks from its mouth, something no one could forget in a very long while. The fact that most of the scenes contain dance is given in that the Vietnamese name for the water puppets is in fact ‘mua roi nuoc’ meaning ‘puppets dancing on water’.
Right at the end the puppeteers emerge from the house in their water-tight slacks and galoshes to bow and take very well deserved applause from the audience.
So the Rex Hotel in house water puppets theatre looks set to cause quite a splash on the Saigon night life scene. Every nation’s culture arises from the environment its people live alongside. Vietnam is an extremely watery land and its creative folk have devised this unique art and entertainment genre right from the level of the village. Delightful light-hearted watery scenes are to be enjoyed here. Alongside this visitors can also enjoy and learn a lot about Vietnam’s rich cultural heritage; myth, history, music, dance, and song. As the Australian man seated next to me said, ‘I learned so much tonight’. I would add you have not fully been to Vietnam if you have not seen a show like this!