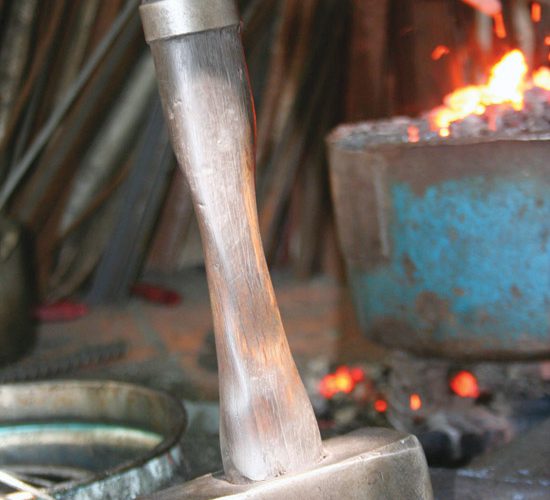 Going hammer and tongs at a dying vocation

Lo Ren (Forge) Street in Hanoi was once noisy and ‘hot’ day and night, but now only one blacksmith is working in a modest little space of a few square metres. The owner of the remaining workshop is a middle-aged man named Nguyen Phuong Hung. He is also the last man on the street that can make crowbars, small hammers and drill bits.
Some objects like door hinges, tripods for cooking pots and snail picks cannot be made by machine. Hung only makes products to order, so his hand-made items are of higher quality than mass-produced items sold at markets.

Hung said, ‘The trade has been through three generations in my family, but my granddad was at the helm for the peak of the business.’ Hung’s grandfather made all the machines ordered by Bach Thai Buoi – one of Vietnam’s four richest businessmen in the early 20th century.
He was the man who made all the tools for Ta Duy Hien, who gave birth to Vietnam’s circus performances. He also studied a French power loom to make the first power loom for Van Phuc Silk Village.
‘My father made weapons used during the war. He also made lots of machines and tools for farmers and workers to increase crop yields,’ Hung said.
During the peak years of blacksmithing, the products were mainly special orders placed by French customers. They included bolts for use in the construction of the Hanoi-Saigon railway, offices and public structures.
Blacksmiths on Lo Ren Street made the hinges, gates, drill bits, hammers, pliers, pincers, chisels and decorative iron gate pieces. On Lo Ren Street, hundreds of forges burned all day long.
Hung started learning the profession from his father when he was a fourth grader; but then, he began to try his luck at several other jobs without success, before returning to the profession 10 years ago.
Hung is now over 40 years old, but he learned the skills when he was very young, so he is very capable with the hammer. He works very fast and does as much work as three new blacksmiths can do.
Hung said, ‘I don’t have to employ unskilled workers to help me. I can make arrangements and take care of all the stages without any assistant.’
The pieces of iron are heated till they are red hot; then, the blacksmith puts them on an anvil and strikes them till they take shape, before putting them in a tank of nearby water to cool the products.
In addition to some water, oil, salt and coal, a blacksmith always has a pot of water on the forge to make use of the heat, as well as prevent the heat from hurting his face.
Blacksmithing may look easy at a glance. People may think that a blacksmith just heats a piece of iron in a forge before hitting it to make what he has in mind. However, it is not so easy.

Hard and slight hits are usually followed one after the other, and the iron pieces should be heated to the right temperature and the iron pieces should be struck at the right places. All those things require practice.
‘The hard hits are needed to change the shape of the iron pieces, while the slight hits help the blacksmith make harder hits at the right places. This job requires good health, strength and a bit of skill,’ Hung said.
According to Hung, plastic-cutting blades are the most difficult things to make, because good blades require a complicated process of iron tempering and blade sharpening.
During the hot summer days in Hanoi, Hung still works hard at the forge. Blacksmiths in the past wore thick gloves while working, because of the heat from the forge and possible burns caused by small bits flying when the iron pieces are hit.
However, Hung has worked with bare hands for the past decade. He explained that a thick pair of gloves would reduce the sensitivity of his hands. He just wears a long-sleeve jacket and puts a thick piece of cloth over his thigh while forging the products.

If he only repairs things for customers, he burns an average 15kg of coal every day. Yet he may burn hundreds of kilos of coal a day when making a lot of products to order.
10 years ago, he reluctantly took over his father’s job when the old man asked him to do so. Hung just wanted to please his father, who was then very old and weak. But then, Hung started to become interested in the sounds of the hammer and anvil and the light from the forge.
He said now he couldn’t happily spend a day without hearing the sounds of the hammer and anvil, or the sizzling sounds when the hot iron pieces are put in the water.
At weekends and during holidays, Hung still sits by the forge. His wife sometimes complains about not being taken around for a ride.
Next to him is a pot of iced tea his wife makes for him and a pipe his father used for several decades before giving it to him.
On this famous street, there used to be a wooden communal house in an area of about 400 square metres, worshipping the founder of blacksmithing. It was where a Blacksmiths Trade Union was established right after Vietnamese communists took power in 1945. A Blacksmiths Union was also founded at the communal house. Like the decline of blacksmithing, the blacksmith worshipping communal house has disappeared. What is left is only an altar in a garret of about 20 square metres.