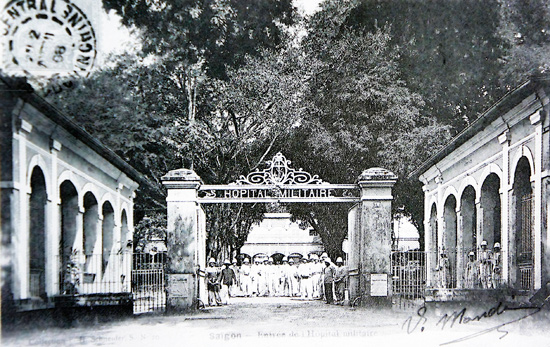 Vietnam Heritage, February 2011 — The grounds of the Grall provide a rare opportunity to escape the madness of District 1’s streets and relax in leafy surroundings. The variety and number of tall trees, well selected and tastefully laid out, allows for an arboretum that seriously challenges the Botanical Gardens themselves, which lie no more than 500 metres away

A photograph in the book L’Indochine En Cartes Postales, by Jean Noury, published by Publi-Fusion Editeur in 1992 by Ba Han

My grandfather’s loo was located outside in the backyard and hard up against a high wall. It was in the shape of a rectangular box and perhaps two and a half metres high. Long after Grandfather died the then owner, having modernised the house, applied for planning permission to demolish the toilet. An inspector arrived and declared it a listed building to be conserved as an historical relic. It is an early example of the flush loo, an invention of Thomas Crapper which revolutionised sanitation. The cistern is very high above the seat and is operated by a very long chain. I remember it took quite a lot of force as a young lad to pull. This story forced me to re-examine my notions of exactly what constitutes heritage and for what we need to be grateful to our ancestors.
Something else that is hardly likely to make the UNESCO World Heritage list is located between Ly Tu Trong and Nguyen Du Streets in downtown District One, Ho Chi Minh City. This is ‘Benh Vien Nhi Dong 2’ or ‘Grall’ as inscribed on its wrought iron gates. It also has great functional value serving currently as a children’s hospital. Unlike more obvious heritage sites such as Hanoi’s Temple of Literature, the Hue Citadel or even the Ben Thanh Market facade, no tourists are to be found here; only throngs of anxious, caring parents and their recuperating progeny.­
First allow me to give you a brief history of this heritage site. Having established an administration in Cochin China in 1862, one of the first needs of the French colonisers was for a hospital. Work began in 1867 and the Naval Hospital for the military and administrators opened its doors in 1873. As is true for other early French buildings, like the Notre Dame Cathedral and the Saigon General Post Office, work was executed with minimal local input. Materials were brought in from France.

Much was pre-fabricated and assembled in situ. The eponymous Dr Grall was the chief physician and inspector who opened the hospital to the Vietnamese in 1905. In the same year Dr Calmette stayed at the hospital. It is significant that the only French names preserved as street names in Vietnam are those of medical men; Calmette, Yersin and Pasteur. (One exception being Alexandre de Rhodes, who devised the Latin based alphabet in which Vietnamese is written today.) In 1925 the hospital was renamed the ‘Grall’ and in 1958 it became a civilian facility. Finally, in 1976, it was dedicated to paediatrics.
The grounds of the Grall provide a rare opportunity to escape the madness of District 1’s streets and relax in leafy surroundings. The variety and number of tall trees, well selected and tastefully laid out, allows for an arboretum that seriously challenges the Botanical Gardens themselves, which lie no more than 500 metres away. At the hospital, too, the species names are displayed in Vietnamese on some of the trees. In the middle distance a gentleman with his own private little hose sprayed one of these trees. No need for a label here. This surely was a prime example of a ‘lava tree’.

Theatre, at the centre of the Grall’s serenity
Photo: Ba Han

In front of the main hospital building stands a long avenue of tall trees. The French planted such lines of verdure all over the city they developed. Today, however, it is difficult to appreciate them as you whiz by in or on vehicles. When walking on the pavement this pleasure is also impeded as one battles through the obstacle courses of vendors and potholes all the while warding off illegal passing motorbikes. Here in the Grall, however, one is at liberty to slowly stroll among these jotons of the jungle and gaze up at their grandeur. Yet even here one is not entirely out of range of the internal combustion engine. Staff, it seems, are allowed to zoom around on motorbikes and break the peace. One wonders if they are rushing to save lives or simply too lazy to exercise their limbs. Also the Vinataxi yellow taxi company is permitted to extend its territorial rights from the street right up to the brink of the wards. It is no more than a hundred metres to carry a child or in the worst cases wheel him or her in a wheelchair to the road. Surely the sanctity of a place of healing would dictate that only wheels allowed would be those of slow-moving battery-powered vehicles transporting goods or laundry.
Neither is it necessary to hire a yellow taxi to gain admission to this living heritage site. Access to the general public, including curious large-nosed visitors, is free and easy. I have used the Grall as a short-cut regularly for the past ten years. Only once was I refused entry and that was when accompanied by my daughter, who would have been six years old at the time. A word of warning though, they tend to lock the Ly Tu Trong Street gates early on the weekends, at around six o’clock. This has transformed my short-cut into a long-cut on more than one occasion, as I have had to back track to the other end.

In the quiet, spacious grounds of the Grall hospital
Photo: Ba Han

The main building, which dominates the complex, is a two-storey affair and houses most of the wards with its grey steel arches and railings. It is well aerated and you can walk through a wide passageway at its central reception area. The metal arches bolted into place look as if they have come from a Meccano set. Indeed they immediately strike one as belonging to a girder bridge. It is not known if Gustave Eiffel had a hand in the design of the Grall. He did however design two of Vietnam’s most iconic bridges – those spanning the rivers in Hue and Hanoi – and Saigon’s Central Post Office. His pre-fabricated strips of steel and bolts were shipped out to several of France’s colonies. The roofs of this and most of the other buildings are made of red terracotta tiles. One of the many out buildings, which are spaciously laid out, has a high, sweeping tiled roof. This gracious building does not seem at all French. It has more of a Vietnamese rustic design and is a pleasing find among the tall modern towers of District 1.
One of these out buildings which house the various departments caught my eye in particular. With its cross clearly displayed at its peak, it is a large Christian chapel. Maybe the interior could tell a tale or two, I pondered. I walked around the back to encounter dutifully padlocked doors. Then I tried the front entrance and entered into a large porchway. This was occupied by priestly looking gentlemen clad in white and bowed before computers. I enquired in Vietnamese as to whether this was the point of entry to the chapel. These temple guardians greeted me with a chant of ‘không, không, không’! Repelled by such negative magnetism I decided to leave to the Almighty the mystery of just what use his house was currently being put to.
All this cultural activity might leave you with an appetite. Fortunately there are a number of food and beverage outlets on the premises at prices rarely encountered in this upmarket zone of the city. For those interested, the opportunity of getting in contact with real local people might be a further attraction. The main place is a long, single-storey building marked ‘c?n tin’. To the side of this is a branch of a local fast-food chain. I noted their frog rice porridge at VND15,000 ($0.75) for a small serving. By the Nguyen Du gateway, just inside the grounds, a window has an advertisement for the pork version of this dish (cháo th?t heo) at a price I have not seen since first arriving in Vietnam in 1997 – VND3,000! Whilst this may be primarily destined for the mouths of babes and sucklings, for some people such sustenance might be an alternative to the ‘soup of the day’ available at a branch of a well known coffee house just about