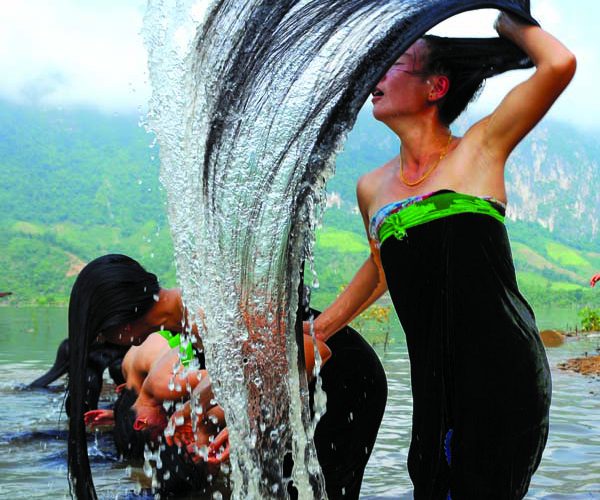 Legends have it that once upon a time, there was a Thai female warlord named Lady Han, who defeated northern invaders on the eve of a new year. Coming home from the battle field, Lady Han told her troops and the people to rinse their heads in the river to celebrate the victory and the New Year. They met the New Year with high spirits and serenity, a happy state of mind they had never felt before. Since then, to celebrate the lady warrior who taught them the way to dispel bad luck and attract good fortune, Thai people have their hair washing ritual every New Year’s Eve.
In the hair washing celebration, Thai people worship Lady Han and make offerings to the god of the mountains. After that, they enjoy Thai dances which are widely famous today, and traditional games such as tug of war and pole push.
This hair washing ritual, called ‘Lung Ta’ in Thai, is very important to Thai people. As an expression of loyalty and gratitude to their ancestors and traditions, and a means of communication with the spiritual world, it is a uniquely Thai ethnic and cultural feature.
Today, in many places such as Phu Yen District of Son La Province, Muong Lay of Dien Bien Province, Muong Te of Lai Chau Province… Thai people still preserve the Hair Washing Ritual.
Perhaps Quynh Nhai District of Son La Province is one of the places where the ritual is the most vibrant, attracting more tourists than the others.
The shaman and many families at Quynh Nhai begin the preparations a few weeks before the ritual date. Women wash rice to get a white liquid, which they put in big jars and leave to ferment for over a week.
On the eve of the lunar New Year, hundreds of people gather at a village square. When the drums and gongs announce the time, the shaman, dressed in his traditional outfit, leads a procession of folks carrying jars of fermented rice water and fresh green tree branches. At the bank of the Da River, they divide in to two groups. The men and boys go upstream and stand about 50m from the group of women and girls. The shaman begin the ritual, praying to heaven, earth and other gods, asking them to dispel the old and bad things and cast good omen over the community.
Prayers read, drums and gongs announce it is time now for the hair wash. People walk down from the bank and bend down over the water. Women unpin their meter-long hair and let it fall bobbing on the water, a mesmerizing sight
Then they use the branches to sprinkle water on their head, at the same time praying for the bad things to vapor away. After that, they pour the fermented rice water on their head and pray for health and happiness in the coming year.
Finally, they wash clean all their clothes before leaving for home.
Thai people believe that failing to have their hair washed on the New Year’s Eve means not having washed away bad moods, bad feelings, bad emotions, which may remain and bring bad luck, diseases and bad business in the coming year.