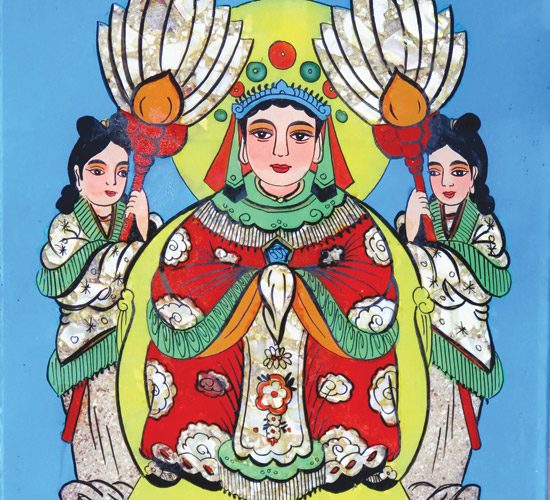 In the South, among the old idolized items, wood carvings were the rarest, and then came reliefs, painted in red and gold, then votive tablets with carved Chinese characters. Next were sacred items. Most popular were writings and paintings on red papers. Early 20th Century glass paintings came to satisfy the need for altar decoration. They were particularly useful and affordable, and quickly spread throughout the South, from pagodas and temples to homes and shops.
Historically, the glass painting trade was brought to Vietnam by Chinese migrants in the early 20th Century. At first, the glass shops in Cho Lon sold only mirrors, picture frame glass, closet glass and mirrors and coloured glass for doors and windows. Later, they painted large gold characters on glass for occasions such as weddings, funerals, longevity celebrations, shop openings and calligraphic sets.
In the 1920s, some glass painters moved to Lai Thieu, the cradle of craft industry. Lai Thieu belonged to Thu Dau Mot (currently Binh Duong Province), not far from Saigon – Cho Lon. Being rich in resources, easily accessible by waterways and the Saigon-Loc Ninh railway, this was a hub market where wholesale goods were gathered to be distributed everywhere. Lai Thieu’s glass painting trade quickly boomed. Reinforced by batches of artists graduating from the Thu Dau Mot Art School, the quality improved, and they won a large market share all over the South. A line of trading junks waited in line day and night at docks.
Technically, the painting is done on the back side of the glass. The painter makes a mirror image on paper, then puts the glass on top and draws border lines according to the paper pattern. This is called ‘separation’. The separation lines must be clear and thin. After that, the separated areas are painted in the order from nearest to furthest. The background is last. Separation lines can be ‘smeared’ where bordering areas have the same colour with different intensities. Then the painting is dried in the sun. Later, the painter can glue nacre, gold powder or gold paper to add glory to the picture. Finally, the painting is coated with a protective layer, framed, and finished.
Originally, the painters used colour powder, mixed with Chinese ink and vegetable oil. Later, natural and chemical paints and colour powder mixed with leather glue were also introduced.
Remarkably, in its development and popularization as a genre, glass paintings have always embraced local culture to form new strains, each unique in its own right.

1. The Cho Lon (Big Bazaar) strain
Glass paintings of the Chinese at Big Bazaar are the oldest, serving the cultural and religious needs of the Chinese and the Vietnamese in the area. This strain uses mostly red colour and glues and gold and silver sheets to make the picture glisten. To create bright lines or backgrounds, the painter waxes the back side of the glass, then scrapes out the wax on the lines or background areas, and applies chemical reactions similar to mirror back coating.
The Cho Lon strain is used mostly for congratulation gifts and worship items.
The congratulation gifts are very diverse, both in topic and format. These are gifts for occasions such as New Year, longevity celebrations, shop openings and new homes. The topics are usually a reference to Chinese classic literature. For example, ‘Fisherman’s big catch’ is given on the occasion of shop opening to wish the host gain much profit, ‘Eight saints’ represents best wishes, ‘Riding to finish line’ means to wish success in business and career. ‘Five Gods of wealth’ means to wish prosperity.
Among the worship items, most popular are pictures of Shakyamuni [the historical name given to Buddha], meditating in the lotus posture, with his hands in different positions. His dress may reveal his right shoulder and arm, or hide both shoulders, according to the dress code of H?nay?na Buddhism. This Buddha is seated on a lotus, and the background may vary.
Worship paintings for the Chinese community mostly depict historical figures deified by the common folks. There are also pictures that depict both Chinese and Vietnamese deities combined. These are called pictures of Life-Supporting Gods.
Family Guardian Gods are also important for all families. Paintings of Tu Vi are hung above doorways to guard the house, to scare away evil spirits. These paintings are extremely popular. Tu Vi is a young boy sitting on an imposing lion, sword in one hand, and the Eight Trigrams in the other.

2. Lai Thieu strain
Rich in colours-notably pink, blue, white, yellow, and green, but there are also black and red backgrounds. The special feature is that all designs and patterns are sacred to create a reflective effect. Traditionally, the reflected light was green on wood engravings. Then they use nacre, multicolour metal sheets, gold and silver, and later, chemical coating.
Ancestry worship paintings are a specialty of the Lai Thieu strain. It depicts a landscape with a mountain in the background, a tortuous creek, a few houses half-hidden behind some trees, and in the centre, a beautiful house that has a garden by the stream and a bridge. It is meant to remind us that ‘Father’s labour is like the Thai Son mountain. / Mother’s love is like the water in the stream.’ Later, they added an old tree with a big trunk and large canopy to the picture, meaning ‘Trees have roots, and water comes from small springs.’

3. Ba Ve strain
Later from Long Dien B Commune, Cho Moi District, An Giang Province, came the Ba Ve strain. Once, a woman used to sell necessary supplies to traders passing a busy spot on a river. That was Ms Ve (Ba Ve). Later, the place became a bazaar, called Ba Ve bazaar. Gradually the area around this small village bazaar took the name too.
The trade began here in the 1950s. The man who started it was Mr Tran Van Tu. He learned to make glass paintings in Can Tho, in the Lai Thieu style. After that, many learned it from him, and glass painting became a trade of the village.
In the last two decades in Ba Ve, they have moved from hand painting to silk printing technology. Each picture uses seven or eight colours, and people use colour layering techniques to mix them to create the required effect.
In this strain, Buddhist paintings play a major part, especially the set to hang on a horizontal beam that runs through all three compartments of a house, depicting great episodes in the life of Shakyamuni.
Another main topic of Ba Ve strain is ancestry worship. Each set consists of three paintings. The middle one has the Chinese characters Happiness, Wealth, and Longevity at the top; the middle reads ‘Seven Generations in the Ninth Heaven’, with a pair of kow-towing dragons, or other sacred animals and a lotus within a lace patterned frame; a tray of five fruits lies at the bottom. The two on the sides have parallel sentences in Chinese or Vietnamese, ‘Glory’ on one side and ‘Riches’ on the other, with a flower underneath. A simplified version consists of only one painting with the Chinese phrase ‘Seven Generation on Ninth Heaven’ in the middle, and the parallel sentences on the sides:
Think of Buddha with every sip,
Feel those in the Ninth Heaven day and
night.
Ba Ve strain produces a lot of decoration paintings, two-piece sets of chamber door paintings on topics such as ‘Spouses in harmony’, ‘Peony and phoenix’ (wealth and high life), and ‘Plumeria and peacock’ (freshness and splendour). There are also flower- painting sets of four with ochnaceae, orchid, daisy, and yellow bamboo, representing the four seasons of the year. There are also very simple paintings of countryside scenes, such as a brick house by a stream with a bridge across it, or a buffalo boy playing a flute. There is no limit for decoration topics, but all the paintings show the aspiration for peace and prosperity.
Finally there are three particular paintings of the Ba Ve strain, related to the local religions: Precious Mount’s Fragrance, Four Gratitudes and Hoa Hao Buddhism. One shows the sacred Seven Mounts with the prophecy ‘On five mounts dragon and phoenix blossom/The seven mounts will be precious.’ The second depicts the Prajñ? boat with the description verses ‘It’s the Prajñ? boat I am steering/Resolute to save you from the river of blind passions.’ Third is a picture of a lotus on a brown background for followers of Hoa Hao Buddhism.

4. The Khmer strain
According to maestro Thach Narin-Det, Khmer glass paintings appeared in Tra Vinh during 1935 – 1936, and in Soc Trang in the ‘40s, and are continuing today.
The ancestry worship paintings in this strain are mostly portraits. The person in the portrait wears traditional Khmer dress: a sampot, a square-collar shirt, a checked muffler or white ‘sen sam nak tho’, and sits on a carved wooden chair with or without cushions, next to a table with tea utensils and a flower vase on it. Behind the person is a curtained window. The floor is enamel tiles. The solemnly dressed body and everything else is usually ready-made, and when an order comes, the painter adds a face.
A Khmer house has a Buddhist-style altar in the centre, but with one difference; the Khmer rarely use Buddha statues. They have paintings instead. During the New Year celebration (Chol chnam thmay) the Khmer bring their Buddha paintings to a temple for the ritual of bathing Buddha, and then take them home.
All Khmer paintings-on glass, wall or canvas-use the same themes, similes, style and colours. It is clear that the wall paintings came first, then those on canvas. Glass was very rare and therefore expensive. Since then, H?nay?na Buddhism and Hinduism became infinite sources of themes and topics and inspiration for the folk artists. As in most of folk art, these paintings are two-dimensional, exploiting block building and colour shading techniques. Nowadays new techniques are also applied to create three dimensions and light effect, making them objects of high aesthetical value.
Khmer folk artists are real virtuosos of their trade. They share the same themes and topics, but each master’s work is very distinct. And the Khmer glass paintings are very much different from those of the Hue, Cho Lon, Lai Thieu and Ba Ve strains. They all contribute to the common treasure that bears the signature of each community and ethnicity, making diverse yet unified works of art.