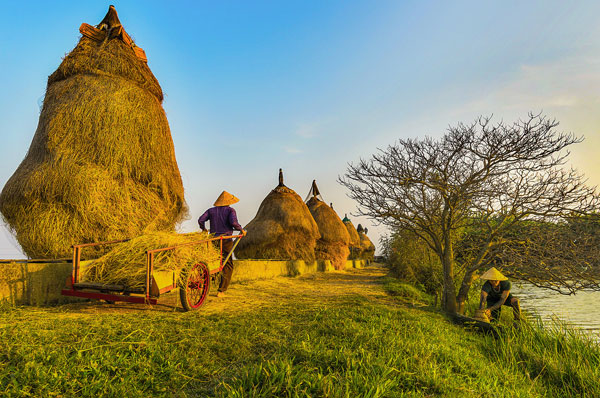 A fading symbol of the past,
the thatch heap was once highly important

Today we rarely see a thatch heap, even in a purely agricultural countryside. But just a few decades ago, thatch heaps were a symbol of the Vietnamese countryside. Every household had at least one, and people utilized the thatch in their daily lives.
The size of the thatch heaps may be a good indicator of a region’s level of production and development. Big thatch heaps mean good soil, good weather, hard work and wealth. The size may change from one place to another and from one year to the next.
Some love to joke that the thatch is also an indicator of ‘class’, as they show if the owner is rich or poor. A poor family’s heap is usually small. The bigger the heap, the richer the owner, because he must have big fields which can yield good crops. The heaps even reflect the owner’s ‘character.’ Thatch heaps of artistic people or those who love showing off are often shaped like a mushroom, while those of down-to-earth, practical people always look like a bamboo shoot, tall and firm. Mushroom-like heaps look impressive and attractive, but are difficult to build and easily destroyed by chickens. Bamboo-shoot like ones, on the other hand, stand firm, are less time-consuming to build, and the chickens would have a hard time picking and pulling at the straws.
In my native village, thatch was very important. It was cattle food in stormy days and in winter when grass is too short for them. Buffalos and oxen were a major work force that helped plough the fields, and they couldn’t do without this food source. In many places, thatch was also used as kitchen fuel. But in my village, that was considered a waste, because thatch was not in abundance and it was thought that it should not be used in such an uneconomical way. Thatch was also used to make mattresses, nests for hens, and to cushion things for transportation. And the best way to reserve this multipurpose resource was to heap it up.
After the cut rice bundles are brought home, grains are plucked by threshing or letting cattle stamp on the bundle, of which the latter way is the best, because it makes the straws softer and drier. Then the thatch is spread in the courtyard and on the village streets to dry for a few days, during which time it must be turned over several times to make sure all the straws are dried equally. When the thatch is dried and turns from yellow to whitish, it is stacked up to make room for another batch of thatch until all the collected thatch is dried. Only then do households start to build their thatch heaps.
Heaping thatch is a combination of technique and art. Technique helps make the heap tight, tall and almost waterproof and thus keep it from rotting. As the straws are pulled out from the base for consumption, the heap stands firm. The art makes it round and symmetric and have the desired form. It takes quite some time and work.
As kids, we used to wait all year, looking forward to the thatch heaping day. It marked the end of a harvest, when both the adults and kids could relax a bit and have a few good meals. There was always a meal with meat and fish, Quang noodles, sticky rice and sweet pudding. Notably on the day of thatch-heaping, rice vermicelli was on the menu. It was not homemade, but traded 2-3 baskets of un-husked rice could be traded for a basket of vermicelli. Rice gleaned by kids on the fields could also be traded.
Thatch heaps were part of our childhood. They were where we kept our breath, burying ourselves in the game of hide and seek, where we found a little warmth in cold winter days, and where sweet fragrance came from, which softly lulled us into dreams.

Text by Le Thi and Photo by Le Duc Thanh